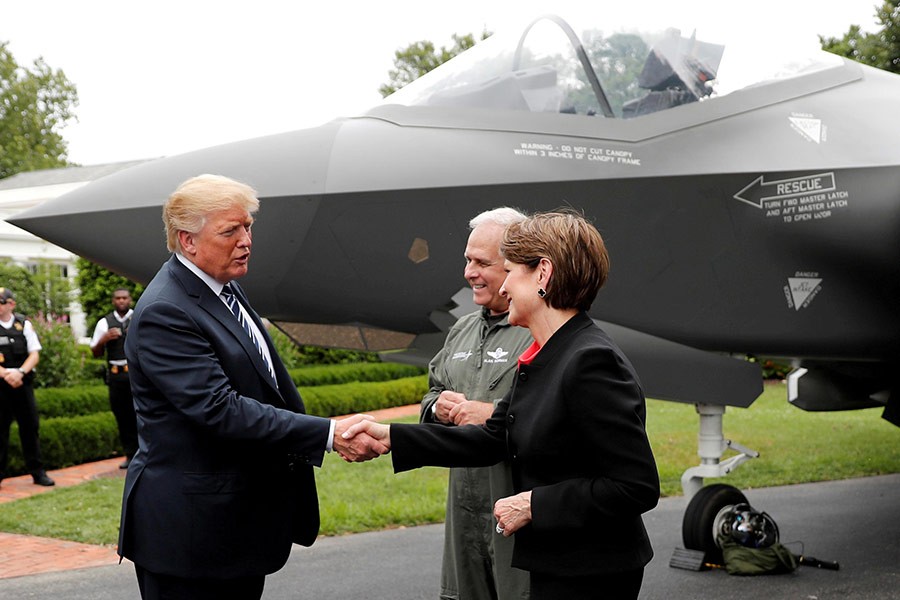 In 2019 global defence spending rose by some 4 per cent over 2018 - the highest year-on-year increase in a decade.

The figures are included in this year's Military Balance - the annual publication of the International Institute for Strategic Studies (IISS), which is to be launched later this morning at the Munich Security Conference.

Appropriately, defence spending in Europe is also on the up, reaching levels not seen since before the financial crisis - an increase of some 4.2 per cent when compared to 2018.

This is all a reflection of a changing world and the return of state-on-state competition.

In both the US and China defence spending increased by 6.6 per cent in 2019, though the rate of growth is accelerating in the US, while it is slowing in China.

Asia - where defence spending has been rising for some years in response to Beijing's rise as a regional superpower - continues the trend. Overall defence spending in Asia has increased by 50 per cent in a decade, fuelled by the region's rising levels of GDP.

The Military Balance asserts that defence debates remain dominated by an unstable international security environment. Key elements of the rules-based international order that characterised the post-World War Two period, it says, are being challenged.

One of the best examples of this is the unravelling of the fabric of arms control agreements inherited from the Cold War. The Military Balance points to the demise of the Intermediate-Range Nuclear Forces (INF) treaty, prompted by Russian breaches and a growing concern in the US about Chinese weapons in this category; Beijing was not a party to the original treaty.

The Military Balance says that observers are "looking nervously" towards both Moscow and Washington to see if the key remaining element of the arms control architecture - the New START Treaty - will be renewed. This expires in less than a year and is the only surviving agreement limiting the strategic arsenals of the two nuclear super-powers.

Growing unease about Russian behaviour is one factor driving the increase in defence spending in Nato countries. To this can be added a significant element of US pressure, with President Donald Trump rarely missing an opportunity to condemn what he sees as the freeloading of Washington's European allies.

European spending is growing - but even in 2019 it only reached the levels observed when the financial crisis began in 2008, though the Military Balance notes that more money is slowly going into procurement, research and development.

Germany, a country much criticised by Mr Trump, is said by the IISS to account for a third of the overall rise in European defence expenditure. It calculates that German defence expenditure rose by some 9.7 per cent between 2018 and 2019. However, Berlin still fell short of the Nato target of spending 2 per cent of GDP on defence. The Military Balance calculates that only seven Nato members currently meet this goal: Bulgaria, Greece, Estonia, Romania, Latvia, Poland and the UK.

The Military Balance points to significant advances in military technology; systems that are now either entering service or have already made their mark. The relative ubiquity of uninhabited aerial vehicles (UAVs) used now by both state and non-state actors has prompted renewed interest in anti-UAV systems.

At the strategic level, both Russia and China appear to be in the process of deploying hypersonic glide-vehicles and hypersonic cruise missiles - super fast systems that threaten to overturn calculations about the effectiveness of missile defences.

This year's Military Balance also points to one of the fundamental strategic problems of our day, the concern that "competitor states" are now using "strategies to achieve effect by operating below the threshold of war".

It points to Russia's initial move into Crimea; its denials of involvement in eastern Ukraine; its use of chemical weapons in the UK; and its alleged election meddling. It cites Iran's activities as another example, particularly its ability to conduct warfare through third parties.

All these approaches are hard to counter with conventional military responses.

As the Military Balance concludes: "They place a premium not just on developing the right military and intelligence capabilities but on boosting the adaptability and resilience of equipment and military forces and, more broadly, of societies and political decision-making."