Elitism and personal insecurities that lead to cringe-tagging 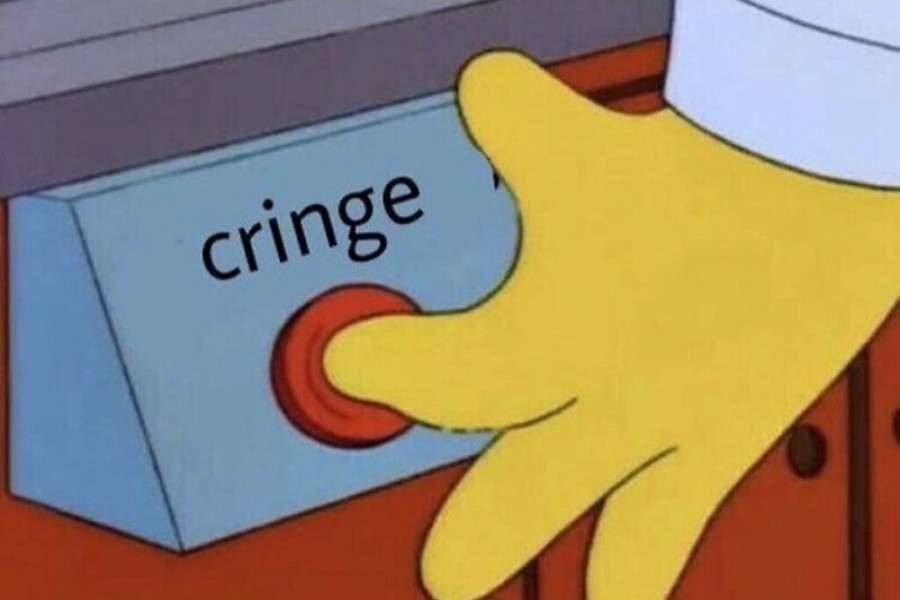 What is cringy? Anything that creates the feeling of embarrassment or awkwardness in our mind is cringy. And it is not us only who can make ourselves cringe, it can be anyone in our society who can cause the abstract, but profound feeling of cringiness that makes our skin tingle.

We, as a species, are quite conscious about social validation and conformity, as straying from the majority norms and getting rejected by peers have been engraved in our DNA to be perceived as bad.

So, cringy things make us feel like keeping in touch with our surroundings and thus, allow us to feel relieved.

However, if cringy things make us feel relieved, why do we feel that the whole act of tagging others' cringe is not good? What makes the cringe culture so toxic?

Why do we cringe?

Cringe is an automatic response that stems from either contempt or compassion. When someone goes through a certain embarrassing act or experiences a miserable failure, that memory is etched into his brain.

Now, the contempt or compassion involved in this empathy response is dependent upon the personal experience of the person experiencing cringe, and how they process embarrassment.

Cringe content exists exclusively for people to laugh at, or feel contempt for. In this case, the empathy response comes from a place of self-hatred. People make themselves validated and reassured that they would never behave in such a way. So in a sense, this is a projection of our own insecurities.

Naffatun Zinan, a first year student of English at the University of Dhaka (DU), is of the same opinion, "I think cringe tagging is vicarious embarrassment. Suppose a lunatic person is roaming the streets naked - this feeling evokes empathy in our mind. That is vicarious embarrassment. The feeling makes us feel pity, and also provides solace for we are better than the mumbling lunatic."

According to Melissa Dali, the author of the book ‘Cringeworthy: A Theory of Awkwardness,’ cringy things are like horror films. We feel frightened, and at the same time, we feel relief as the film is assuring us that we are in a better position than the characters in the film.

The feeling of superiority that comes with cringe tagging has its root in the human ego, as deep down, it is known to us that being exposed to such situations, we have failed as well.

"The ones who feel most judgemental are the most insecure," said Zinan.

What is cringe culture?

The term ‘cultural cringe’ was coined in Australia after the Second World War. It explored ingrained feelings of inferiority that local intellectuals struggled against.

The cringe culture is tightly connected with cultural alienation, the process of devaluing or abandoning one's own culture or cultural background.

The cringe culture seems harmless unless we are ignoring the fact that this is the cool version of the auntie next door for the millennials.

Aside from being snobbish, there is another issue with the cringe culture. That is the context of trendsetting, the benchmark of tagging something as ‘cringe.’

It is hard for anyone without substantial social or financial capital to set the benchmark. What will be dubbed as cringy or trendy is always set by the rich and influential people, here the middle or working class have no say whatsoever.

Shoaib Mahmud, a final year student of the Department of Physics and a socialist activist, has pointed it out as well, “Market creates a trend, the market creates elitism, and market fixes the criteria of elitism too. And these criteria are not for all, not every class can afford it.”

He gives an example of the phenomenon of cultural elitism - listening to Meghdol or Mohiner Ghoraguli is cool and trendy, but listening to Momtaz or Baby Naznin is cringy.

Here lies an interesting observation, Momtaz and Baby Naznin represent the working class, their fan base is not elite, posh urbanites.

“Even if you and I have been listening to Meghdol or Mohiner Ghoraguli for a long time, we are not trendy. In order to do so, we need to buy the associated merchandise, wear t-shirts with their logos, or sing their songs to cool places like Rabindra Sarobar or Shilpokola Academy,” added Shoaib.

Now here comes the elephant in the room - who is tagged as cringe the most? The answer is people without the privilege of beauty, wealth, or in-depth knowledge of internet norms. They possess qualities we have been taught to deride - the wrong sort of body type, a lack of talent, an unusual hobby, a rundown house, simple clothes or not so posh locality.

The TikTokers may be a nuisance at times with their gang culture and some genuine cringe-worthy videos, but it is a nascent platform.

Ten years ago or so, Youtube was a place full of weird, cringe videos posted by emo kids, and those pranksters who dominated YouTube back then were perhaps a bigger nuisance for society. Zinan has her own thoughts regarding this matter.

“I want to divide the society into three classes. The lower class gets entertained from the cringe, the elite has their own culture that hardly matches the rest of the society. But the middle-class people who try to imitate the elite create this problem of elitism and cringe tagging.”

“The wannabe elites try to follow the urban Zen Z culture, yet their inherent insecurities kick in. So, they try to distinguish themselves from the masses by cringe-tagging the lower class,” she explained.

In this era of internet and connectivity, ignorance is a choice. So rather than dubbing anything that does not follow the societal standard as cringe and alienating others for being different, we can always choose not to consume them.

If something does not please someone, it is not cringe, it is just not his cup of tea.