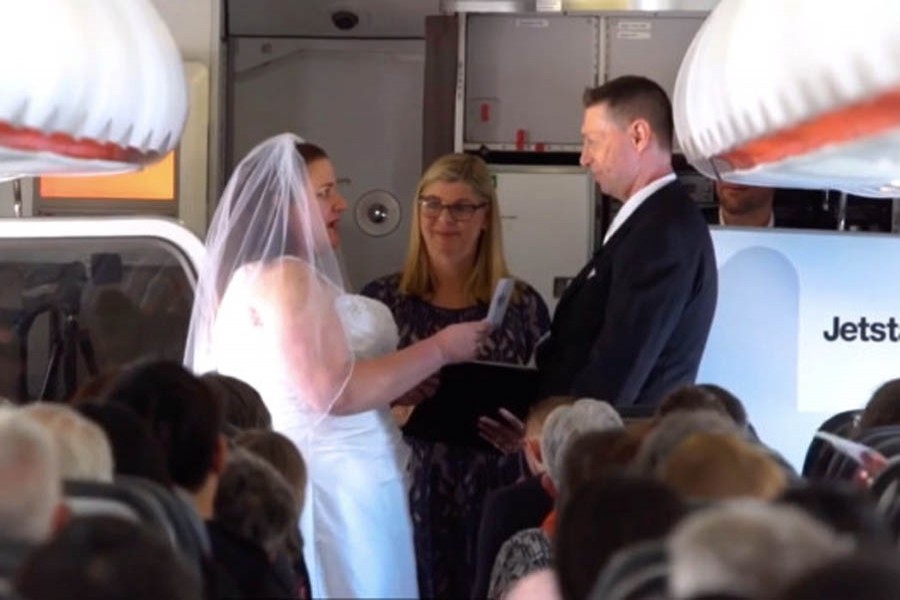 A couple got married on a plane 37,000 feet in the air— eight years after meeting while playing an online game about airports.

Aviation enthusiasts David and Cathy Valliant said, "I do" 37,000 feet in the air, getting married during a flight from Australia to New Zealand-- 8 years after they met online playing an aviation-themed video game.

David, from Australia, and Cathy, from New Zealand made the decision to get married on a plane flying from Sydney to Auckland at the exact halfway point between the two cities.

The ceremony took place on a flight operated by Jetstar, an Australian budget airline, according to a global media report.

It was attended by regular passengers who were told about the ceremony in advance, as well as the couple's friends and family.

A video of the big day was captured and posted on the Jetstar YouTube channel.

The ceremony itself took place mid-flight and was carried out by Jetstar cabin crew.

As well as symbolising the couple uniting from their respective countries, the decision to have the wedding on a plane was also down to the couple's keen interest in all things aviation.

It was their interest in airplanes that brought the couple together.

"We both love aviation, the bond is there," said David in the video.

Cathy and David met online in 2011 while playing the aviation video game "Airport City," before meeting in person two years later, according to CNN.

In a comment posted on her Facebook page, Cathy said there was a bit of turbulence climbing out of Sydney but that the ceremony itself, which started 15 minutes after takeoff, was not affected.