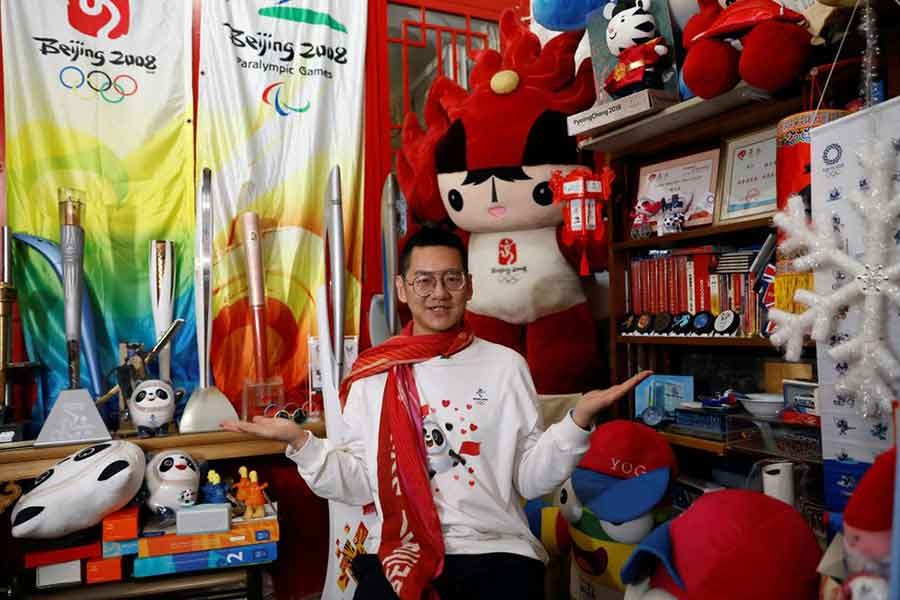 Beijinger Zhang Wenquan is looking forward to this week's Winter Olympics more than most residents of the Chinese capital, Reuters reports.

Zhang, who works in logistics for a construction company, is obsessed with the Olympics, and has been collecting memorabilia from around the world for 20 years.

More than 5,000 items, from giant cuddly mascots and Olympic torch replicas to commemorative stamps and coins, fill his small house in one of the historic Xicheng district's narrow alleys.

"I feel very tired after work, but when I see the collection I feel very happy," said Zhang, who donned Olympic-themed clothing to show off his home, where high ceilings and packed shelves make it look like a shop.

"They are not just things but carry the memories of each Olympic Games," he said. "When you see them you recall wonderful moments, such as opening and closing ceremonies, the athletes, and beautiful things about the Olympics."

The 35-year-old superfan began collecting souvenirs during the Sydney Olympics in 2000. He has spent around 500,000 yuan ($79,000) so far and anything damaged during shipping to China is lovingly restored.

In 2008, he volunteered at the Beijing Summer Olympics, taking charge of distributing and printing athletes' results. His badge from those Games is proudly on display.

It's hard for family and friends to understand how he could spend all his savings on a museum to the Olympics, sometimes even borrowing money to add to the collection.

Driven partly by concern that limited edition memorabilia will soon sell out, his passion has also made him many friends.

While hunting for the 2022 Winter Olympics special edition mascot souvenir box, he met a young man named Liu who had dropped out of school to care for his cancer-stricken father.

To help out, Zhang borrowed money to buy all seven boxes Liu had to sell. When Liu saw the superfan's home, he was amazed.

Now good friends, the two plan to watch the opening ceremony of the Winter Olympics together at Zhang's place, surrounded by the mascots and other memorabilia.