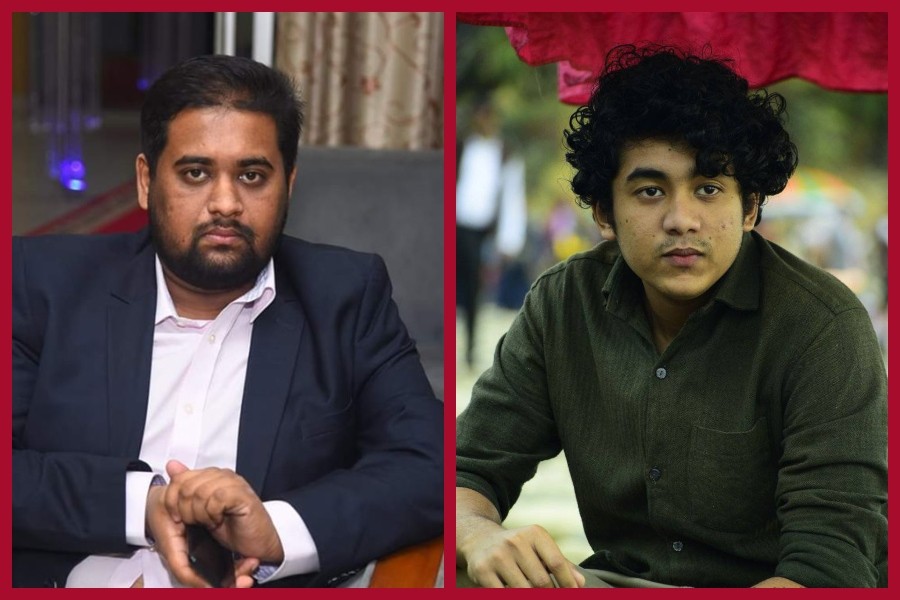 (From the left) Shah Ataur Rahman Shihab and Faiyaz Ifti

The annual pilgrimage for Bengali bibliophiles ‘Amar Ekushey Boi Mela’ has commenced last Tuesday, much to the delight of book readers'.

Thousands of writers, poets, researchers, essayists and translators have toiled for months to offer the readers the gem of their literary brilliance, and this year, there are some adventurous writers venturing into unique genres.

Thrillers may not be the most critically acclaimed or lauded genre; however, for the young and young adult readers, thrillers bring a rush of adrenaline and transport them into a fictional world away from the daily mundane life.

Bengali writers, as a whole, indulge mostly into writing detective thrillers; therefore in both Bangladesh and West Bengal, nearly three-quarters of all thrillers end up in a whodunit crime fiction.

Nevertheless, the scenario is changing as writers have begun exploring other branches as well. We have seen novels on unique topics where new writers are experimenting to create a more diverse literary scene.

Among them, two writers who have been trying to walk the paths of unique genres are Biblical Fantasy and Cosmic Horror.

A fresh breath of air in Bengali fantasy world:

Fantasy Fiction is a fascinating genre of global literature. Hardly any avid bookworm has yet to read book series like the Lord of The Rings, Harry Potter, Dune or the Game of Thrones.

In the Bangladeshi literary sphere, it is a surprise that fantasy fiction has not been much explored. There have been a few attempts, but nothing can come close to the essence where magic realism and ethereal world building can transpire to.

So when it comes to biblical fantasy, where the writer incorporates references and characters from Abrahamic religious myths and elements to build a fantasy world to mesh modern life and religious themes together, even the west has produced few literary pieces.

In Bangla, Satyen Sen has been the first writer to incorporate such themes in his book Obhishopto Nogori, yet the focus was just not there.

Using biblical or religious myths and symbols to portray horror and menace has been a staple in horror novels in recent years. Tanzim Rahman and Aamer Mostaque Ahmed have been brilliant in this regard.

However, the first writer to write authentic biblical fantasy fiction in Bangla has been Shah Ataur Rahman Shihab, the writer of Apotheosis and Prottaborton, where the modern day world has coalesced with biblical myths to form a novel genre of Bangla thriller domain.

“I have always been fascinated by the Messiah Syndrome,” Ataur Rahman Shihab said while talking about his inspiration to tread on a path never used before.

“After reading about it, I decided to write about a Messiah and how his advent twists the very fabric of our modern world. That is how I got the inspiration for my first novel.”

His first novel ‘Apotheosis’ tells the chronicles of an apocalypse where angels, demons and humans vie for survival, leaving heaven and the earth in utter chaos. It was published in 2020 and received widespread positive response from the readers.

His second novel ‘Prottaborton’ is a time-travelling story where a secret agent tries to turn back the course of history by travelling back to the past. Both the novels have the biblical texts and religious myths at their basis.

“There is a rich and diverse literature on the Old Testament, the New Testament and Rabbinic (Jewish) literature; which in turn influenced some of Islamic myths as well.”

“I take my inspiration from such literature and blend them with modern day thrillers,” said he, “I try to take a canvas as large as possible to draw my mythical world of fantasy.”

Fantasy fiction genre has not been widespread in our country. Ataur Rahman Shihab has his own observations about it.

“A fantasy novel is usually about seven hundred to eight hundred pages, making it a robust book. So, the production cost is high, so is the price of the book. The high price dissuades the readers from buying the book, making it a high-risk venture. So, we see less novels in this genre.”

When asked about the prospect of the fantasy genre, Ataur Rahman Shihab, a student of the Department of Economics of the University of Dhaka, opined that the readers are eagerly waiting for unique and exceptional stories.

So, he believes that soon there will be more young writers braving the genre, opening a new horizon.

Another new genre that has been ventured this year is cosmic horror. Bangla literature has a rich horror scene, beginning from Taranath Tantrik by Bibhutibhushan Bandopaddhay or Baroda by Sharadindu Bandopadhyay are considered classic horror and supernatural tales.

This year, the young writer Faiyaz Ifti, a student of the Department of Women and Gender Studies at the University of Dhaka, has ventured into the realm with his cosmic horror novel - Nari Nakkhatra. The book will be published by the Bhumi Prakash Publications.

“The idea first came to my mind when I was reading about the alien origin of mankind by Ellis Silver, which claims that we, the humans, are the ancient alien race who had colonised the earth,” he told this scribe while standing on the premise of the Book Fair.

“You can imagine how the theory stirred up the mind of a young man from Sunamganj.”

Experiments by the youth will open new horizon:

Faiyaz Ifti loves cosmic horror and conspiracy theories, and he gets inspiration from those sources.

He thinks that the young writers are the ones who can experiment with different themes, as they have less expectations from the readers and they do not need to worry about disappointing their fans.

But he admits that there is a downside to this, as readers have no way of recognising new writers, and in case, the book is not extraordinary, this may very well spell the doom for the novice.

“There has not been much lovecraftian horror in our literature,” he said about the incentive to write on such a unique topic, “we hardly find any horror story that deals with larger than life monstrosity.”

He is hopeful about the prospect of such a genre as he said, “We love films and series about cosmic horrors, so I believe that the readers will love the fresh breeze in our horror scene. Four or five enterprising writers can change the situation in a few years.”

With such diverse literary exposure and extraordinary experiments, the Bengali readers may hope to see a bright future for the Bengali literary universe.