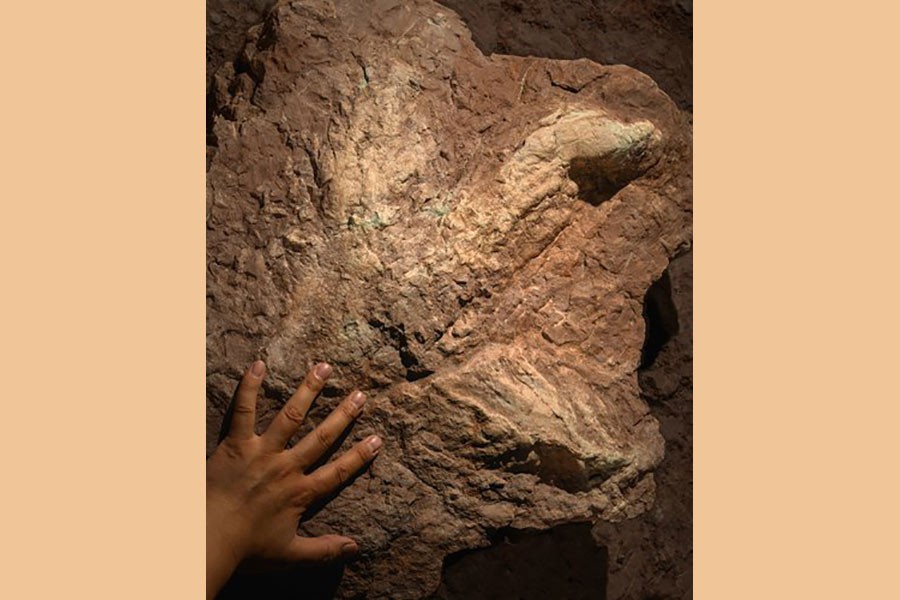 A fossil displays a Tyrannosauripus track

A tyrannosaurid footprint was found by paleontologists in East China's Jiangxi Province, marking the first of its kind to be found in Asia.

The discovery is of great significance to fauna distribution research and Late Cretaceous evolution.

This track, found in Ganzhou, Jiangxi, is 58 cm in length and 47 cm in width, and is one of the largest theropod tracks from China, said Xing Lida, a dinosaur footprint expert at Beijing-based China University of Geosciences.

Xing said that morphologically, the Ganzhou track is different from other large theropod tracks from China, but similar to the well-preserved Tyrannosauripus tracks from New Mexico and to Bellatoripes from British Columbia. The similarity has lead Xing to tentatively label the track with Tyrannosauripus.

Xing noted that most dinosaurs footprints found in China date back to the Jurassic Period or early-Cretaceous.

"A dinosaur footprint from the late-Cretaceous is very rare, not to mention a Tyrannosauripus, which is at the top of the food chain."

Xing suggested the body length of theropods is at least 7.5 meters. This is generally similar to the estimated length of the Qianzhousaurus skeleton which was approximately 7.5 to 9 meters long.

Qianzhousaurus is a type of Tyrannosauripus previously found in Ganzhou, Jiangxi Province.

The location of the footprint is less than 33 kilometers from where the Qianzhousaurus was found, Xing stressed, noting the fact it belongs to the top-level predator increases the possibility the track was left by a Qianzhousaurus.

The track was found by Xing, Niu Kecheng from the Yingliang Stone Nature History Museum at Nan'an, China, and Martin G. Lockley of University of Colorado, along with other researchers.

The findings were published in Science Bulletin, a multidisciplinary academic journal supervised by the Chinese Academy of Sciences and co-sponsored by the National Natural Science Foundation of China.