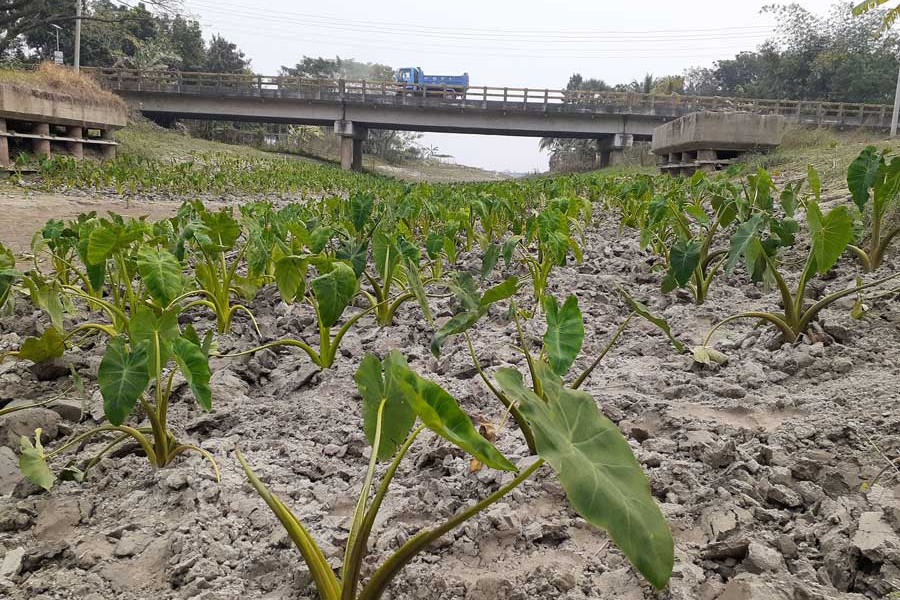 FARIDPUR, Feb 11: The source of the Mandartala canal originating from the Padma river has dried up for about one kilometre.

Then, local farmers have started farming taro in the area. Standing on the Sadipur Bridge it is seen that the canal is filled with little taro plants. The bottom of the canal is covered with dark green leaves.

The Mandartala canal is in Sadipur area of Aliabad union at Faridpur Sadar. The canal crosses 9.0 km route and merges with the Kumar river in the Bakhunda area of Girda union in the upazila.

This canal is important because it is an attempt to keep it navigable throughout the year.

The Water Development Board (WDB) recently dug the canal along with the excavation of the main rivers of Faridpur Kumar and Mora Kumar.

Shadihpur village resident Ohidul Sikder (46) has planted taro in the dry part of the canal near the Sadipur Bridge.

The grower said he planted the vegetable on at least 33 decimals of land.

Ohidul Sikder said he planted 2,000 taro saplings on the land last year and made a good profit from the sale of the item. "Each taro is sold at Tk 50 to Tk 60", he added.

"This time I planted around 4,000 saplings and I am expecting to make around 0.17 million profit", he said, adding, "The vegetable requires low production cost. We start harvesting taro from the Bangla month Boishakh."

During a recent visit this correspondent found many farmers in the area are involved in taro cultivation in the canal.

A good number of farmers said taro farming is profitable.

Taro plants start producing creeper arum within two months of planting and growers can collect those for up to six months. It is a tasty and popular vegetable, they added.

Jamal Khan, Fazal Khan, Sohrab Sikder, Farhad Hasan and at least 10 other farmers of the area have cultivated taro on the canal soil.

Faridpur DAE sources said in the current year around 260 hectares of land have been brought under the farming of taro in the district with the production target of 980 tonnes.