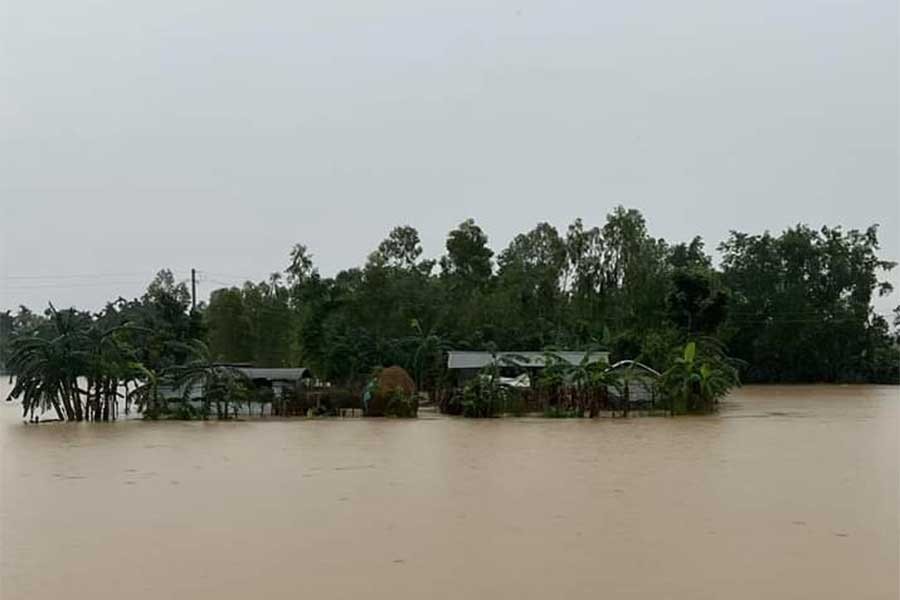 Residents in 39 unions in six Upazilas of Netrokona district were affected by floods amid a rise in water levels on major rivers in the district.

According to the local Bangladesh Water Development Board (BWDB) office, the water on Ubdakhali River in Kalmakanda Upazila of the district was flowing at 63 centimetres above the danger level at 4:00 pm on Friday.

On the other hand, the water on the Someshwari River in Durgapur Upazila was flowing over 36 cm above of danger zone.

Many houses, roads, and educational institutions in Netrokona Sadar Upazila, Barhatta, Purbadhala, Khaliajuri, Kalmakanda and Durgapur were affected by floods. Some areas on the bank of rivers have faced river erosion.

Local administrations were trying to prevent erosion by installing geo-bags.

Netrokona’s Deputy Commissioner Anjana Khan Majlish said they have opened around 188 shelter centres and as many as 16,180 flood-affected people were taken to these centres.

She said they have provided dry food and clean water to the affected people and cooked food will also be served later.

“In addition, 68 metric tonnes of rice, cash aid worth Tk 250,000 and 2,000 packets of dry food were sub-allocated for flood-affected areas,” the deputy commissioner said.

She said they have opened control rooms in district and Upazila levels to monitor the flood situation round the clock.

Flood Forecasting and Warning Centre on Friday said the flood situation in Netrokona and some other districts may further deteriorate in the next 24 hours.

350 sued over Thakurgaon UP polls violence that left infant dead

Five dead as bus slams into autorickshaw in Barishal