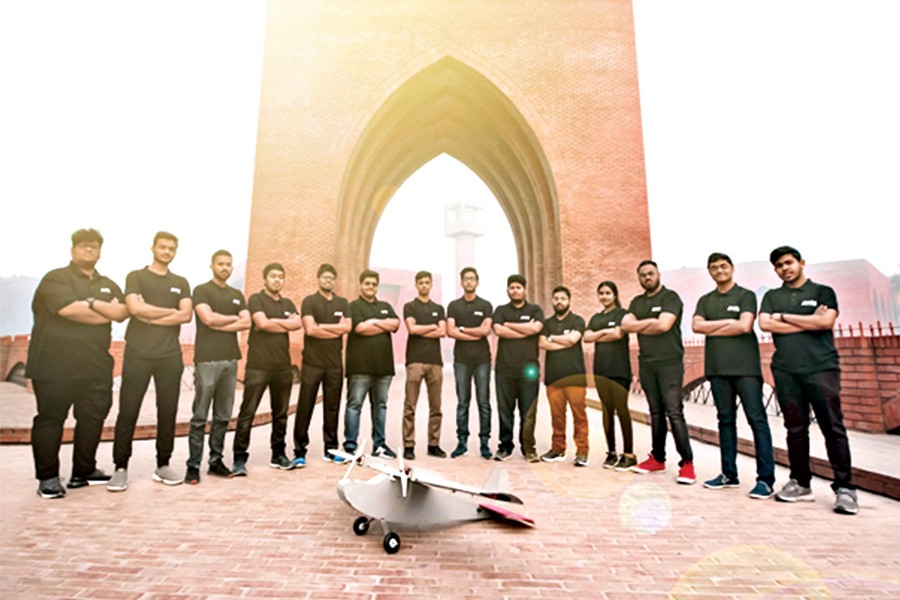 Team ANTS, consisting of fourteen undergraduates from Islamic University of Technology (IUT) with their Freedom-71 project

Institution of Mechanical Engineers Unmanned Aircraft System (IMechE UAS) Challenge is an engineering competition solely focused on the development of an Unmanned Aerial System more popularly known as UAS. Held annually since 2015 in the United Kingdom, the UAS Challenge encourages university students to follow a system engineering process, sets as a yearlong project of a full design and requires building a cycle of a UAS. The teams are presented with specific mission objectives and phased stages of completion that require strict adherence and assessment in order to qualify.

This year Team ANTS from Islamic University of Technology (IUT) participated in the competition as the very first team from Bangladesh and walked away with three prestigious awards, beating over thirty teams from many high-ranked universities across the globe, including the previous winners of the competition. The team of fourteen undergraduates conquered the media and engagement award, business proposition award and was even the highest placed new entrant. While sharing some of their team stories, the team's Chief Operating Officer, Tausiful Islam said, "We were frequently asked about why we named the team 'ANTS'. The answer is simple - no matter how minute these creatures may seem, as a team, they get massive amounts of work done. They are organised; they value teamwork, and they are not intimidated by the size of their workload."

When asked about the technical aspect of their project, the team's Chief Technical Officer, JahiduzzamanTanvin said, "Our project Freedom-71 (F-71) for the UAS Challenge 2020 is a fixed wing UA which utilises a double propeller configuration and a conventional tail boom. Considering the energy consumption, flight time and redundancy, fixed wing configuration was chosen over the rotary wing configuration. The manufacturing technology available to our team was given high priority while designing the UAS. We also crafted a custom CNC foam-cutter along with a custom software for precise manufacturing."

Jahid further added that the UA was designed with minimal interlocking parts in order to make the manufacturing and assembly process as simple as possible. For the package delivery box, they decided to utilise jute, considering that the jute industry is one of the most historically and culturally important industries of Bangladesh. Specific parts of the UA were designed with topology optimization which ensured the increased weight ratio to maximize capacity for carrying the load. Considering the limitation of test flight zones, software was used in a looped simulation for the verification of algorithms, helping successful test flight simulations and avoiding crashes. The UA design was optimized to score maximum points in core mission tasks and an algorithm was developed to drop packages with high accuracy.

The team also went on demonstrating the role of THE F-71 in combating Covid-19 and how their fixed wing UA is capable of flying at a higher speed than multi-rotor UA which can be a significant medium for collecting medical samples that is only the nasal swab required for testing Covid-19 in the fastest possible time.

For over the past one year, team ANTS has been working relentlessly for inspiring and engaging young minds in engineering alongside the development of an UAS for humanitarian aid challenge. Media and public engagement were ensured through both online and offline initiatives which included being active on social media platforms (Facebook, Instagram and LinkedIn), getting featured on national news channel-- bdnews24, arranging STEM outreach programmes in local schools and engaging with people through Facebook LIVE.

The team was widely applauded for their comprehensive presentation. Judge Stephen Phillips from Bombardier Aerospace explained, "For the Dragons, there was one clear winner: Team ANTS."

"The team delivered a well-presented business case in which they demonstrated their knowledge of their target market with practical examples of how their UAS could be applied. A two-pronged lease and service revenue model serving the emergency response and agricultural industries were backed up with realistic sales projections and costs," he added.

Upon asking about the obstacles they had to overcome, the Team Lead, AseerNehalul Islam said, "The biggest challenge our team faced was the lack of expertise in the Unmanned Aviation field in the country (Bangladesh). It was difficult to get access to certain products that were necessary for the manufacturing of the UA. Nonetheless, with the help of the academic counsel and the outstanding dedication of each of the members, ANTS was able to overcome any challenge that it faced throughout its journey so far."

This has been a truly remarkable win for Bangladesh. The participants of this event had to produce every aspect of the development from scratch which made the challenge even more fascinating. This challenge gave the apprentice engineers a real taste of the complicated but fascinating world of engineering. Through competing here, they got to apply their theoretical knowledge in practical fields which will ensure the prosperity of humankind and give Bangladesh a promising head start in the field of engineering and aeronautics.

The writer is a third year student of BBA programme at the Institute of Business Administration (IBA), University of Dhaka. She can be reached at [email protected]

Reminiscing about DU days in Australia

An event to introduce traditional craftsmen