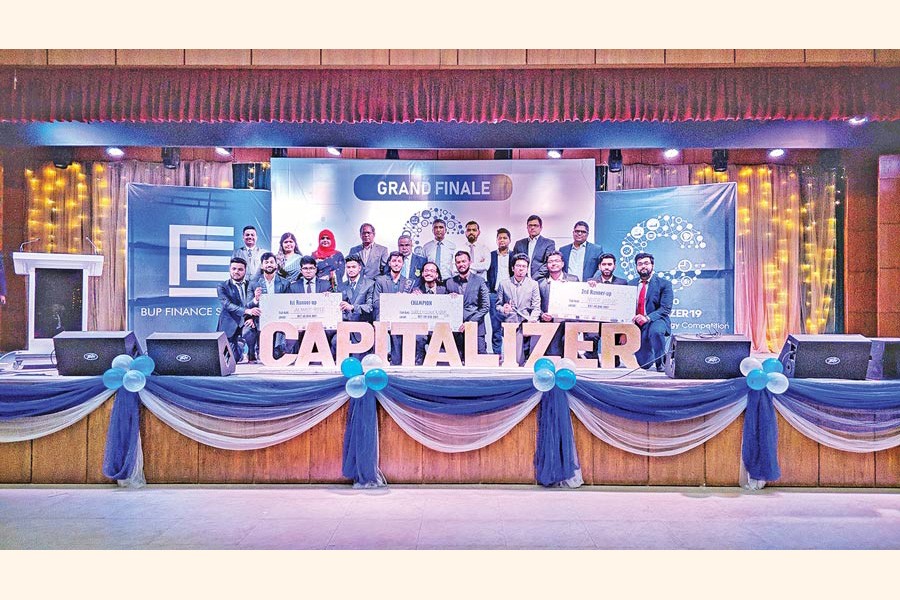 The competition was a challenge to showcase one's ability to solve real-life investment problems and to access the level of command one has over the capital market operations. The participants were evaluated both qualitatively and quantitatively while strategising various real-life business scenarios.

This was for the first time BUPFS launched the inter-university competition. The stage of Bijoy auditorium was ready for the participants. Students of different universities participated head to head in this event. The competition was intense as teams started pitching their ideas one by one.

Professor Dr M Abul Kashem Mazumder, pro-vice-chancellor of BUP, was the chief guest of this event. Abu Aslam, chief marketing officer of Niloy Motors Limited, was also present as a special guest. They both appreciated the initiative taken by BUP Finance Society, as this competition would help the students to explore their latent talents. All the Executive Committee members were present along with guests from institutions such as Credit Rating Agency Bangladesh (CRAB), IDLC, IPDC, Telenor Health and Luminaries Research Group. The four judges for the event were M Solaiman Sarwar, head of strategic initiatives in the Business Finance Department at IDLC Finance Limited, Firoz Ahmed Khan, head of finance at Telenor Health, Kazi Monirul Islam, head of equity research at IDLC Securities Limited and Anam Mahmud, chairman and chief consultant at Luminaries Research Limited.

More than 250 teams competed head to head to qualify to the second round. The second round was named "Deal behind the Bars'. After competing against one another in the second round through pitching innovative solutions to the judges, the six best teams ensured their position in the grand finale.

‘Almost There’, ‘Me and The Boys’, ‘Noobs’, ‘Notch Lodge’, ‘Sharif, Hossain and Noor Inc’ and ‘Team Fincast’ were the six teams that fought in the final round called "Capitalise it beyond" and fought for the title of the champion. The four experienced judges scrutinised the solutions which were  presented by the six finalists. Sharif Hossain and Noor Inc won the title of the champion winning Tk 100,000. Almost There became the first runner-up winning Tk 60,000. Notch Lodge won TK 40,000 as they stood the second runner-up.

After being titled as winners, Team Sharif, Hossain and Noor Inc. shared their experiences about Capitalizer 2019. They said, "The feeling is overwhelming. Honestly, it feels awesome to be crowned champions considering all the hard work we put in. Kudos to all the other teams for making this a wonderfully competitive race. We would also like to express our gratitude to the amazing organisers for arranging such an event."

Behind every student club stands an authoritative figure to ensure everything runs on the track. Miss Senjuti Barua, the acting moderator of BUP Finance Society, said, "The true essence of competitions is not in winning, but in learning something new. In addition, I can promise you, we all go home as winners today. With this wonderful youth, our country is in the right hands. I wish everyone a good fortune in their journey ahead."

Hero Bangladesh was the title sponsor of Capitalizer 2019. After the immense success of the event, the sponsors shared their feelings with us. They said, “Hero Bangladesh is immensely proud to the title sponsor of Capitalizer’19. It was an astounding event altogether. We feel proud to witness so much talent around us. It’s also commendable how the youth these days engage themselves in extra-curricular activities apart from regular studies and manage things so well."

The writer is a second year student of Bangladesh University of Professionals. He can be reached at sayed161201@gmail.com