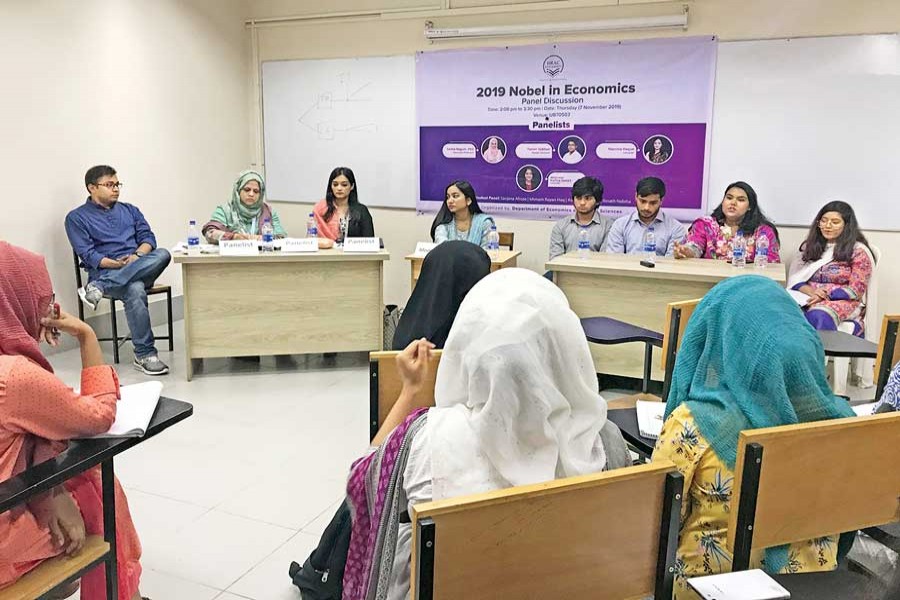 Abhijit Banarjee, Esther Duflo and Michael Kremer -- the 2019 Nobel laureates in Economics have made tremendous contributions in alleviating global poverty crisis. But how have they done it? Can their research model be used in the context of Bangladesh? These are some of the pressing questions in academia at the moment.

In an attempt to answer these questions, the Department of Economics and Social Sciences of BRAC University arranged a panel discussion on the topic of "Poverty Alleviation" and the approaches addressed by the Nobel laureates in Economics of 2019. The discussion was especially insightful for youths as it initiated an opportunity for them to assess the poverty alleviation programme and express their opinions.

Nazrina Haque started the discussion by sharing the history of the Nobel prize. Then she shed light on works of this year's Nobel laureates. The main research of the Nobel laureates was based on India and Brazil. The research method used for poverty alleviation by Banarjee, Duflo and Kremer is called Randomised Controlled Trial (RCT). Randomised Controlled Trial is a research methodology term used to evaluate the efficacy of an intervention. It measures the impact of an intervention on a particular outcome by conducting carefully controlled experiment to compare at least two groups -- one who has received the intervention and one which has not. The group that has not received the intervention is known as the control group. Using RCTs in development economics is considered the newest version of economics and it is called experimental economics.

The methods of conducting RCTs are crucial in understanding the poverty alleviation programme. Tanvir Sobhan explained the methods of choosing a control group and choosing multiple experimental groups. The groups must be completely exclusive of each other geographically and should possess the same socio-economic characteristics. He also talked about the principles of RCT. In conducting an RCT, the experimental groups must be given some incentives which change their normal behaviour and only the control group is to remain exactly as it was. It is up to the researchers to analyse or determine the outcomes. Tanvir Sobhan concluded his discourse by elucidating the overall feasibility of research process using this method. The research process of RCT is not as feasible as expected as the incentives required throughout the process is for a large number of people.

Salma Begum extended on the feasible aspect of RCT and explained the ethical aspect of it as well as went into depth about implementation of RCT and implication of the research. ATM Nurul Amin also engaged in that conversation. Ethical aspect of using RCT as an actual research method calls for the question whether it is moral to essentially experiment on people. It is common in medical science to do experiments but not in economics. Another angle of the ethical aspect of RCT is whether giving one group benefit over the other is ethical. Salma Begum also raised the point about the applicability of outcomes to other areas. "Even with a reliable estimate, we cannot generalise for a larger population,'' she opined.

Following the faculty panellists, student panellists studied papers and talked about different poverty alleviation projects that are implemented in Bangladesh and expressed their ideas on future potential of those projects. Student panel comprised Asir Newaz Khan, Ibnath Nabiha, Ishmam Rayan Huq and Sanjana Afroze. All of them are students of Economics at BRAC University.

Asir Newaz Khan talked about microfinance projects and their effectiveness. From the paper he studied, he found out that there was a discrepancy of results depending on where they were invested. Rural areas had greater output than urban areas owing to the high cost of living in urban areas. While investments in livestock had greatest returns, investment in agriculture had smaller but successful returns. Prospects of microfinance is that it can be used for financing small businesses and social entrepreneurships.

The Ultra-Poor Graduation Model was pioneered by BRAC in 2002. Ishmam Rayan Huq studied the model. The ultra-poor are people who consume less than 80 per cent of their daily nutritional requirement despite spending 80 per cent of their income on food. The graduation model is a carefully sequenced set of interventions across a two-year period, which since its inception, has been implemented on 1.9 million ultra-poor households across 50 districts in Bangladesh alone.

Ibnath Nabiha studied the programme "Shombhabona". The World Bank helped the government of Bangladesh to come up with this programme. In this programme, conditional cash transfer was given to the mothers of the poorer household only if they joined weekly counselling sessions on child nutrition and growth. Results showed that this programme had significantly reduced stunting of children.

Sanjana Afroze talked about the use of agricultural technology to reduce poverty. Agricultural technology refers to the use of GM (genetically modified) seeds that can withhold extensive climate shocks and increase crop production and 'seed fertilise water' technology. According to the paper she studied, a balanced mix of modern rice/ wheat cultivation with non-cereal crop production will lead to highest income with lowest inequality.

When asked about the learning experience from the panel discussion, student panellist Asir Newaz Khan said, "My takeaway from this discourse would be understanding the implication of the research in Bangladesh, understanding the modern methods of economic research and having an idea about how future research will be conducted."

ATM Nurul Amin concluded the session with his take on the research method of poverty alleviation programme of the Nobel laureates and encouraged students to partake in research.

The writer is currently studying computer science and engineering (CSE) at BRAC University. She can be reached at rafisalwa85@gmail.com

One-stop solution for all handyman services