Students brainstorm about initiatives for repatriation 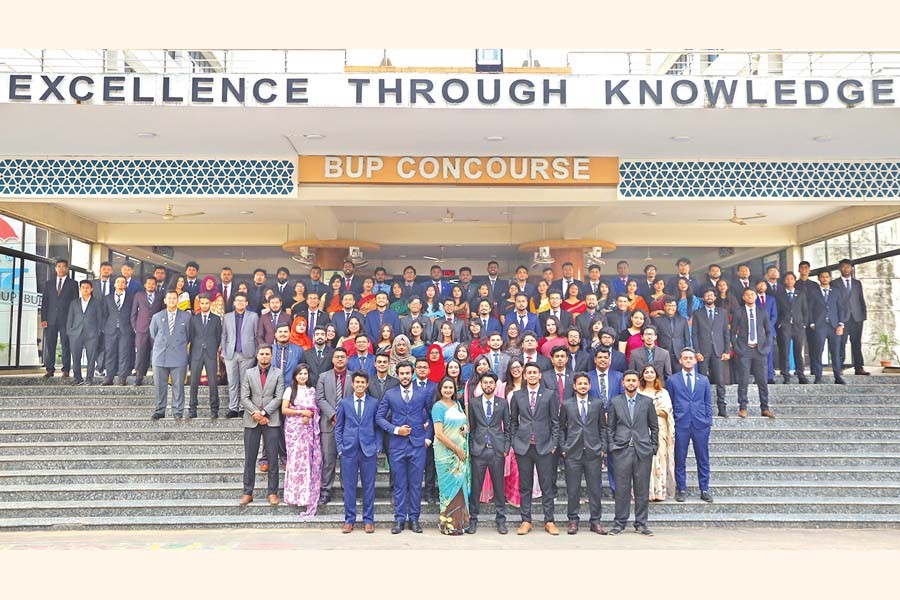 BUP International Model United Nations Conference (BUPIMUN) 2019, one of the most highlighted events of the year, organised by BUP Global Affairs Council (BUPGAC) took place from September 12 to 14, 2019.

More than 400 participants from both home and abroad took part in this well-orchestrated United Nations simulations, under the banner of 13 respective committees which included DISEC, UNFCCC, UNSC, UNCSW, SOCHUM, UNHRC, UNHCR, ICJ, WHO, UNDP, UNNA, "Jatiyo Sangsad" and UNODC. The general theme of the event was "Combating post humanitarian crisis and ensuring sustainable initiatives for repatriation" which shows similarities with the current Rohingya refugee crisis in Bangladesh.

The event was officially inaugurated on September 12 at the Bijoy Auditorium at Bangladesh University of Professionals (BUP) premises. Md Touhid Hossain, former foreign secretary, Ministry of Foreign Affairs, was the chief guest of the event, while Major General Md Emdad-ul Bari, vice-chancellor of BUP, presided over as the chief patron of the programme. Brig Gen Md Siddiqui Alam Shikder, dean, Faculty of Security and Strategic Studies, was the chief adviser.

BUPIMUN, first held in 2016, is the pioneer in the country's MUN circuit. To further stretch its innovation and influence, this year's session comprised a unique method of utilising each delegate's knowledge, namely an Integrated MUN Conference, first time in Bangladesh.  With 13 committees, 130 secretariat members and 39 executive board members, BUPIMUN once again allocated the platform for delegates to witness the most vibrant journey of diplomacy and liveliness.

The three-day long conference provided the exquisite opportunity to experience the difference, with the agendas worth fighting for. Brilliant national and international delegates and proficient executive board members across the country and overseas had a constructed and integrated approach from all the committees for a better accomplishment towards our vision of this MUN Conference.

The second day of the conference saw more liveliness inside the committees, with four more intense sessions. From evening, the stage of Bijoy Auditorium, BUP, was lit up with a range of vibrant performances by both the secretariat members and the delegates themselves. The hit of the evening was the performance by the entire UNDP executive board and delegate board in the Global Village.

The chief guest in his speech mentioned, "The theme of the event not only explains how we are supposed to solve crucial issues in the aftermath of a crisis but also how the solution can be sustainable and irreversible. We all know about the Rohingya refugee crisis created through the atrocities committed by the Myanmar military and how it had affected us. This crisis, if remained unsolved, will not only create impediments to the creation of a better tomorrow for Bangladesh, but also for a wider region. A fire at your neighbour's home can be equally hazardous for yourself." After his speech and the award giving ceremony, the cultural segment started off with a blast followed by dinner and with that the events of BUPIMUN 2019 ended.

Delegates experienced some dynamic and informed debate sessions, energising social events and a unique conference spirit. Since the beginning, BUPGAC has been committed to ensuring that the participants have the most engaging and enriching experience possible in an MUN Conference.

The writer is a BBA student at  Bangladesh University of Professionals (BUP).
She can be reached at
sadiaislampromi12@gmail.com