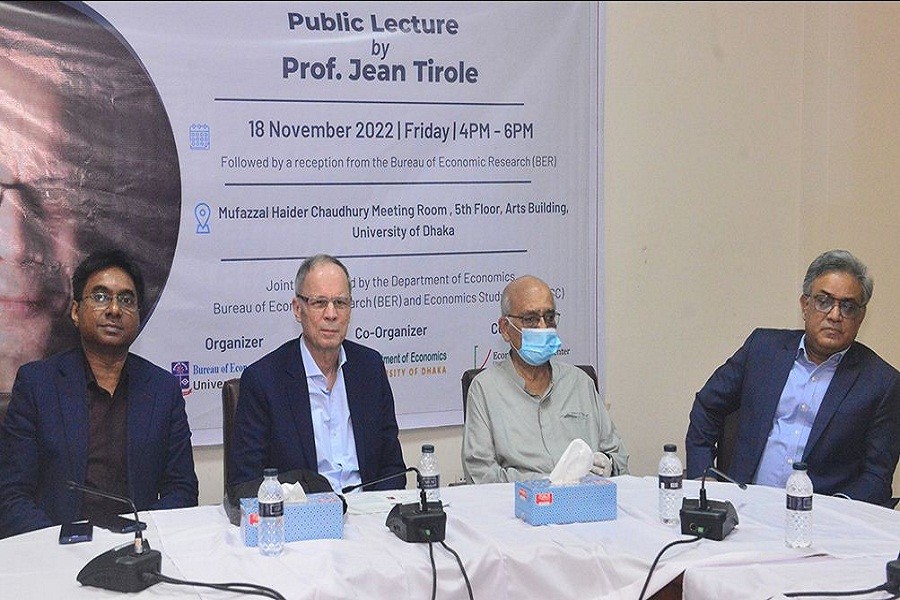 French Economist and the winner of the 2014 Nobel prize, Jean Tirole, who attended the 53rd Convocation of the University of Dhaka, delivered a public lecture on Friday on the Morality of Markets, at the Mofazzal Haider Chowdhury meeting room, Arts Building, University of Dhaka.

The Bureau of Economic Research organised the event along with the Department of Economics and The Economics Study Center, University of Dhaka. The lecture was attended by the pro-vice chancellor (education) of DU, Professor Dr ASM Maksud Kamal, and the Dean of the Social Science Faculty, Professor Dr Zia Rahman.

Veteran Economist Professor Rehman Sobhan was also present at the event. Professor Dr Selim Raihan, the director of the Bureau of Economic Research, moderated the event, and among others, Dr Atonu Rabbani, Mushtaque Chowdhury Professor of Health and Poverty, BRAC James P Grant School of Public Health was also present.

Professor Jean Tirole, who won the Nobel prize in 2014 for his contribution to formulating frameworks for market regulation, talked extensively about morality and markets. As the market economy has become more or less dominant in the current world, he talked about indictments that can be laid against the market.

Professor Tirole also brought up the topic of ethics due to his expertise in the multidisciplinary sector as he talked about choices of Market frames. The topic of replacement logic was also discussed.

He also defined morality from an economic point of view and also shed light on the Fragility of Moral behaviour, which is heavily dependent on context. Professor Tirole also imparted a lecture on the Standard Dictator Game, a basic ethical dilemma, and later on to Modified Dictator Game. Professor Tirole also added that academicians should not be ideologues and should come to conclusions based on empirical evidence.

As the concept of morality was heavily focused on in the lecture, the framework of the definition of morality laid by many prominent social scientists was also discussed. He also delineated the views about repugnant markets from an economic perspective; the views of other social sciences, such as psychology, sociology and philosophy, were also put forward.

Professor Tirole also discussed whether the market frames ethical choices. He also talked about whether an increase in competition erodes moral behaviour.

After the session, Professor Tirole took questions from many distinguished academicians and researchers, followed by questions from students of many different arenas who were present in the meeting.

Will we miss JSC?

IUB teams up with Sweden to strengthen climate action in Bangladesh

The 6th convocation of JU on February 25

'Him Utsab' returns at JU after 3 years

Bangladesh to strike $4.0b deal with Korea

Prices up far ahead of Ramadan