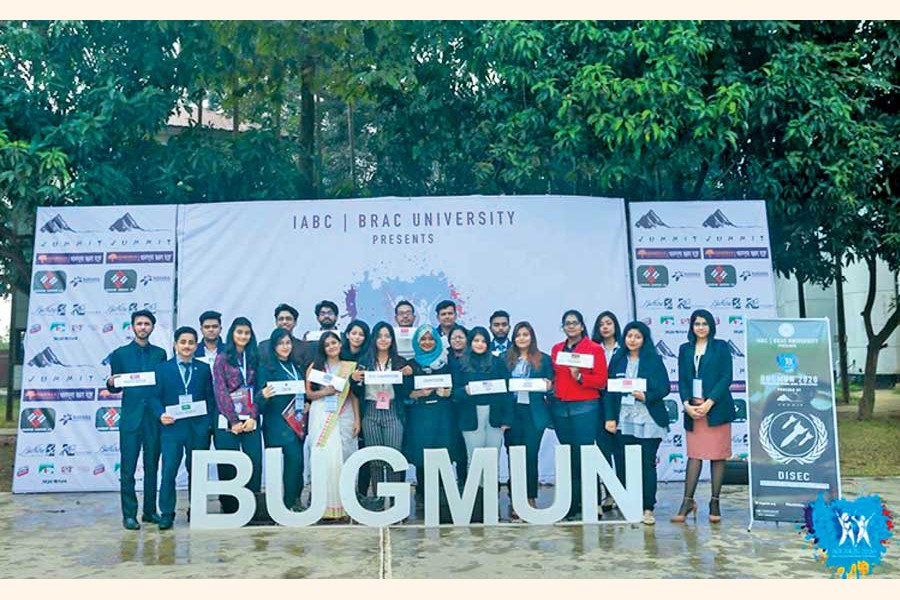 BRAC University Global Model United Nations-BUGMUN2020 took place from January 02 to 06 this year. The fourth edition of the flagship event of International Association of Business Communication (IABC), BRAC University promised to be once in a lifetime experience, where the participants would not only develop themselves as delegates, but also as ethical and moral individuals.

The Under Secretary-General of Hospitality, Mayesha Mahbub expressed her contentment over the event, "IABC of BRAC University thrives for perfection and everyone has come to know of its consistency over the years though BUGMUN. It was an absolute honour for us to host BUGMUN'20 this time. We tried our best to ensure the supreme hospitality, finest academic standards through intense committee sessions and provide everyone a one of a kind MUN experience."

The purpose of this conference was to engage numerous national and international delegates in conversation of global political issues and gain the essence of diplomacy and confidence. The agendum for the conference was: "United in the search of compounding global prosperity: Altruism in practice."

Things that make BUGMUN different from other mainstream events are its events and arrangements such as the Inter-Committee Futsal Tournament, concert, high-toned masquerade ball, lavish gala dinner, etc.

The Deputy Secretary-General, Tasmin Islam Esha stated: "In this edition of BRAC University Global Model United Nations, the entire organising body chose to stand out from the ordinary. BUGMUN has always known to be one of a kind and BUGMUN 2020 proved the statement to be correct on account of the unity of the conference and the fierce competition among the delegates. We provided scholarships to many competent delegates throughout the country, the best of the best came to compete in BUGMUN and undoubtedly the conference quality increased tenfold."

All the committees had two agenda each. For example, the two agenda for DISEC were "Preventing illicit and small arms trade in conflict zones in context of regional assistance and border control measures" and "Tackling the threat of militarisation of Artificial Intelligence as a tool of war and espionage". The participants had to brainstorm and come up with ideas to solve the issues.

The third day of the event featured a mind blowing concert called "Enliven". It was an open-air concert in chilly winter which was perfectly settling for the participants after heated discussions. The concert featured prominent musician and composer Shayan Chowdhury Arnob, and the country's one of the most cherished rock bands - "Nemesis".

Overall, BUGMUN 2020 ended satisfactorily. The Secretary General Jidni Mayukh commented:" I wanted this edition of BUGMUN to be different than other Model UNs throughout the country and we have accomplished many feats that were unseen in the Bangladeshi MUN Circuit. For example, we collaborated with actual UN bodies and we gave some of the best performing delegates an opportunity to visit World Health Organization Bangladesh head office. Moreover, in our committees, we simulated the first-ever dispute settlement committee of the World Trade Organization which is practiced in Oxford University of United Kingdom, we ran a real time United Nations Security Council regarding the recent tension between the USA and Iran, we also had one of the best Indian executive board members named Aaron Mirza who moderated the first-ever US National Security Council in our country. These are some of the highlights of the conference."

The writer is a third year student of BBA programme at the Institute of Business Administration (IBA), University of Dhaka. He can be reached at rashikriasat404@gmail.com