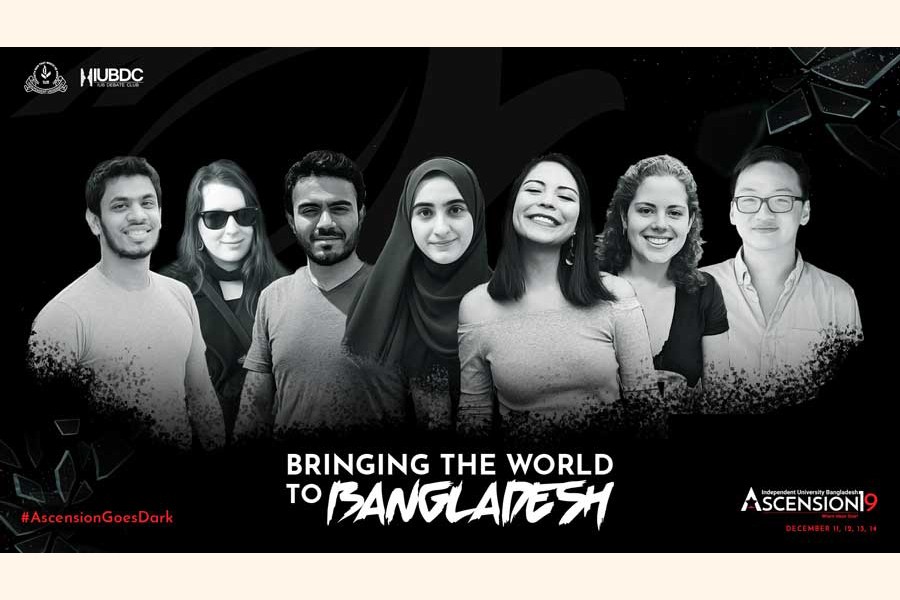 The largest debating tournament of South Asia is back, and as always it is making all the debaters in the country, as well as worldwide, eagerly look forward to it. After rising with heroes in 2016, fighting with magic in 2017, and carving the future in 2018, IUB Ascension 2019 is bringing the world to Bangladesh on December 11 to 14, 2019.

It is not the first time that the tournament has crossed borders, but it's the one with skilled adjudication core that Asia has ever seen, consisting of Jason Xiao from University of Oxford England, Lucia Arce from University of Cambridge, England, Jessica Musulin from Australian National University, Gigi Gil from Leiden University, Netherlands, Sara Rahim and Mubarrat Wassey from International Islamic University Malaysia, and Taosif Amin Khan from Institute of Business Administration, Dhaka University.

Independent University, Bangladesh Debate Club (IUBDC), the former title holder of 'Champions of Asia' at United Asian Debating Championships (UADC), is the host of the event and will be collaborating with other clubs of the institution to make this year's bigger than ever. It's not just a debate tournament any more, it has also become a platform for students to show their talent by participating in a poetry competition as well as an art and wall magazine competition.

IUB Ascension 2019, like every time, is giving a waiver to the debaters coming from outside of Dhaka. This is to facilitate the participants to hone their debating skills by learning from the international participants and adjudicators.

Ascension is the brain-child of Fardeen Ameen, the current chair of Bangladesh Debate Circuit (BDC), and Zubair Ridoan, the current president of IUBDC as well as one of the current vice-chairs of BDC. With the constant support of the Board of Trustees, IUB management and the organising committee of Ascension, they were able to transform their dream into a reality.

IUBDC recently hosted 'BDC Shevolution 2019', the very first Olympiad for women and by women, and also hosted the third edition of their tournament named 'IUBDC Wordplay 3.0' about this time last year. With numerous successful tournaments under their belt, IUBDC is all set to unfold one of the biggest debate tournaments in South Asia with every bit of grandeur.

The writer is studying at the School of Life Sciences at Independent University, Bangladesh. She can be reached at [email protected]

Why extracurricular activities a necessity for students?

Schools should be open despite Covid-19, UNICEF chief says

Virtual business event for school and college students to begin