Bringing debaters at a platform from all around the globe 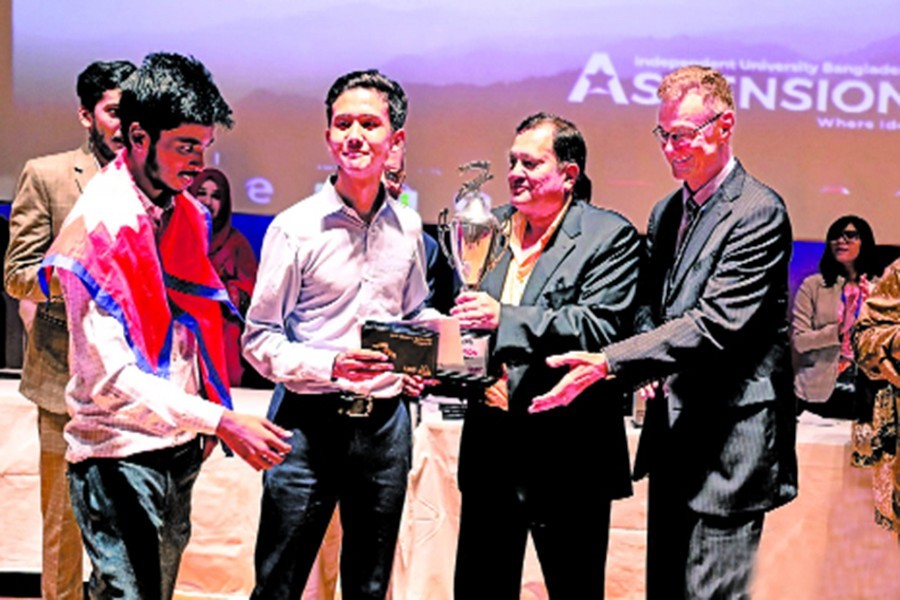 IUB Ascension 2019, one of the biggest debating tournament in Asia, began on December 11 and will continue till December 14, 2019. It is hosting more than 120 teams including more than 21 international teams.

The event is hosting a star-studded adjudication panel, Jason Xiao from the University of Oxford, England, Lucia Arce from University of Cambridge, England, Jessica Musulin from The Australian National University, Gigi Gil from Leiden University, Netherlands, Sara Rahim and Mubarrat Wassey from International Islamic University Malaysia, and Taosif Amin Khan from the Institute of Business Administration, Dhaka University. This is the best adjudication panel ever assembled in Asia, where each individual's achievements range from winning prestigious international tournaments, noteworthy individual speaker awards and having experience in serving in the adjudication core of iconic debate tournaments such as World University Debate Championship, European University Debate Championship. Moreover, the tournament is witnessing participation from 72 institutions all over Bangladesh along with participation from countries like Indonesia, Nepal, India, Malaysia, United Kingdom, South Korea and Australia.

About IUBDC and its events

One of the ways that IUB Ascension stands apart from other debate tournaments is that there is a conscious effort to make debate fun and memorable. This is achieved by setting a unique theme every year, which is brought to life by splendid picturesque decor which organically goes viral in social media. This year is no different, with the theme being: Injustice, an extremely relevant and recurring concept in a world of climate change, refugee crisis and socio-political inequality. The purpose of the theme is to energise the participants with the urgency to view themselves as agents of change in a world where injustice is rampant.

IUB Ascension 2019 hosted by Independent University, Bangladesh Debating Club, is one of the oldest clubs in Independent University, Bangladesh. The club initially started off with hardly six members back in 1999, barely having access to basic facilities like even having a room to debate. Our alumni held debate sessions in the corridors, rooftops just to keep the culture of debate alive in IUB. With their hard work, resilience and thirst to not give up, the club transcended over the years as to being one of the most respected and achievement laden debate clubs in the country, when they won United Asian Debate Championship 2018 coupled with their organising prowess which they display through their flagship event IUB Ascension.

Independent University, Bangladesh Debating Club (IUBDC) has also flourished in terms of hosting other noteworthy tournaments, one of them being BDC Shevolution 2019, which was an Olympiad by women for women and collaboration between all the women in the Bangladesh Debate Circuit and UNFPA Bangladesh Youth Dialogue. It was hosted in collaboration with the United Nations Fund for Population Activities and IUBDC won the title of Champions. The club has also hosted multiple iterations of IUBDC Wordplay, which is a small-scale open tournament hosted by the club to encourage more participation from debaters amongst school and universities.

Remarks of the alumni and current members of IUBDC

This is what Fardeen Ameen, the current chair of Bangladesh Debating Council (BDC) and former president of IUBDC had to say about the club: "IUBDC and Ascension is the university at its best.Year after year both organisation-wise and debate-wise we do our best to break records and change our surroundings for the better."

Zubair Ridoan, currently the president of IUBDC and the vice-president of BDC said, "The club functions like a close-knit family. After facing the worst of times, as to be on the verge of being shut down, as well as soaring to the top to achieve the title of 'Champions of Asia' at United Asians Debating Championship (UADC) 2018, the club has grown significantly bigger and stronger over the years. IUBDC is also known as the host of some of the best debate tournaments in Bangladesh, including the biggest debate tournament in South Asia Ascension."

As a club, IUBDC has always thrived to create a platform that encourages new people to take up on the skill of debating. This includes, but not limited to, regular debate practices and weekend sessions often taken by passionate alumni taking time out of their busy schedules in order to give back to the club. The same values are displayed while organising Ascension, where we conduct a workshop to teach the basics of debate to enthusiast learners. This time, Mubarrat Wassey, three times champion and best speaker of UADC will be conducting 'Cracking British Parliamentary debating" workshop which is an exclusive session designed by the organising committee of IUB Ascension 2019. The workshop is designed to create more awareness about the importance of dialogue and discourse.

The club does not stop at orchestrating workshops but goes on to provide scholarships to meritorious debaters who do exceptionally well in Ascension. This programme is known as Ascension Scholarship and is awarded to the finalists of school category in Ascension. The scholarship constitutes of waiving off full tuition fee for those students who wish to enroll in Independent University, Bangladesh.

With previous iterations, IUB Ascension has already transcended international borders. This time, it is all about bringing the best of the world to Bangladesh.

Sonaly Siddique is currently studying in the School of Business at Independent University, Bangladesh. She can be reached at saaya961@gmail.com