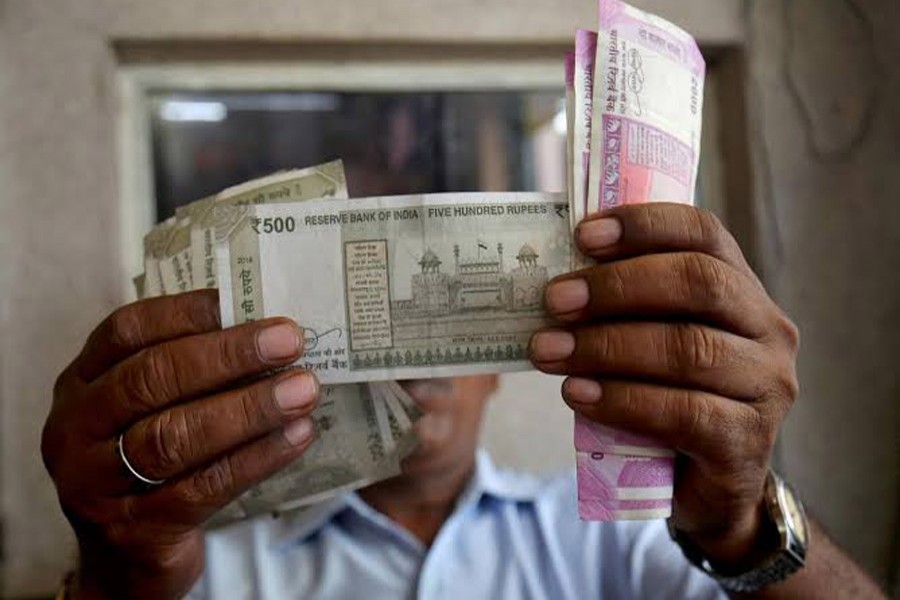 A cashier checks Indian rupee notes inside a room at a fuel station in Ahmedabad, India, September 20, 2018. Reuters/Files

A slowing domestic economy will prevent India’s rupee from recouping this year’s losses against the dollar in 2020, with optimism around an easing in the US-China trade dispute not enough to give it a further boost, a Reuters poll showed.

After falling nearly 9.0 in 2018, the Indian currency has shed another 4.0 per cent this year to touch a 2019 trough of 72.40 per dollar on Sept 3. It has since popped up over 2.0 per cent, along with other emerging market currencies, on hopes of a possible trade deal between the world’s two largest economies.

But nothing has been agreed yet, let alone a meeting scheduled.

A barrage of rate cuts from the Reserve Bank of India this year - five reductions in succession for a total of 135 basis points off the repo rate, now at 5.15 per cent - has done nothing concrete so far to revive a slowing Indian economy.

Neither have several government fiscal stimulus measures introduced this year, which have become a negative for the rupee’s outlook given it will be difficult for Prime Minister Narendra Modi’s government to meet its fiscal deficit targets.

“We expect the INR to weaken as risks of sluggish growth and fiscal slippage intensify,” said Rini Sen, India economist at ANZ.

“Stable portfolio flows led by equities and global cues like trade negotiations, on top of rate cuts, have led to bouts of optimism. However, we think the currency market is under-pricing downside risks to domestic growth.”

The November 1-6 Reuters poll of over 40 strategists predicted the rupee INR= to weaken about 1.3 per cent to 71.90 against the greenback in 12 months from around 71.00 on Wednesday.

The RBI, the most aggressive major central bank in the world this year for easing, is expected to cut the repo rate at its sixth meeting in a row in December, a Reuters poll showed last month, which could put further pressure on the currency.

“Unlike the previous cuts, additional cuts could erode the allure of the rupee as a higher yielder, while (the) growth prospect remains a concern,” said Saktiandi Supaat, head of foreign exchange research at Maybank based in Singapore.

Indian economic growth has steadily slowed to a six-year low of 5.0 per cent in the April-June quarter from an 8.1 per cent peak in the January-March quarter of 2018 and recent business surveys indicate it will slow further, Reuters reports.

While the year-ahead consensus in the latest poll was slightly stronger than 72.50 per dollar predicted last month, it reflects the currency’s gain over the past month.

However, nearly two-thirds of 24 common contributors in the October and November Reuters polls either downgraded or kept their year-ahead forecasts unchanged.

Currency speculators have cut short bets on the rupee to the lowest since mid-August, a separate Reuters poll showed.

The rupee’s outlook was also driven by renewed interest among foreign portfolio investors for Indian assets. They bought 160.69 billion rupees of Indian securities in October, the highest in six months, according to Foreign Portfolio Investors’ data.

“If whatever measures taken by the government so far do not result in improving the onshore growth scenario, then there is risk that whatever portfolio flows which have come so far might reverse...and could result in INR weakness,” said Rohit Garg, emerging market FX strategist at BofAML based in Singapore.