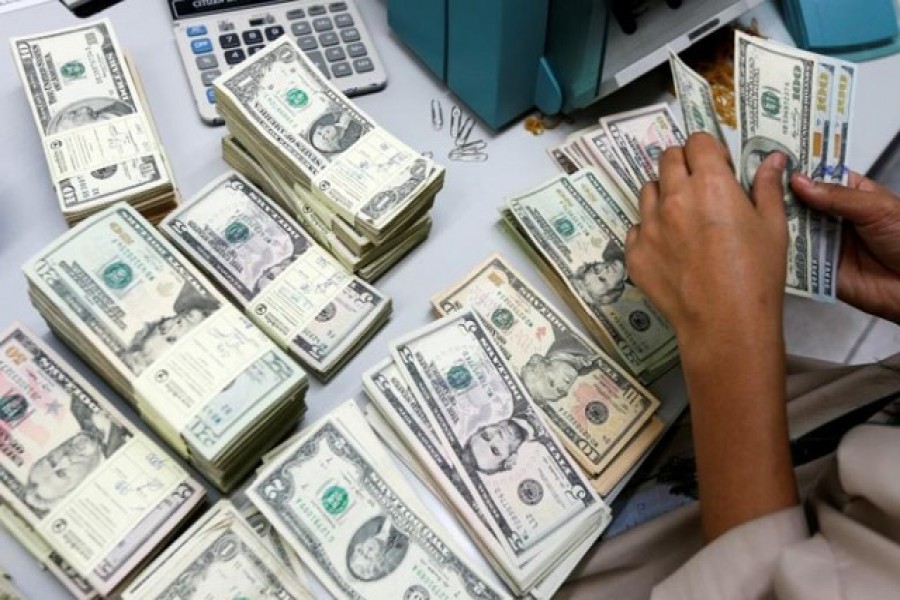 The recent rise of the US dollar against the taka and the bankruptcy of Sri Lanka have raised a burning question in the public sphere - whether Bangladesh’s foreign currency coffers are enough for it to survive when push comes to shove, bdnews24.com reports.

Policymakers, leading macroeconomists and Bangladesh Bank are saying that the decline of COVID-19 cases was met with a global hike at the prices of commodities as the Russia-Ukraine war caused the production and supply costs to go up. Alongside this, a decline in remittances compared to last year’s inflow has caused concerns.

High imports caused the demand for dollars to rise and the Bangladeshi taka, like many other currencies in the world, began losing value.

Meanwhile, the higher dollar expenditure for imports and other necessities is putting pressure on the foreign exchange reserves. Bangladesh had a record $48.02 billion in August last year, sufficient to pay import bills for up to one year, but a steady decline has brought it down to the current $42 billion.

The International Monetary Fund does not agree with Bangladesh Bank on how it reports its dollar reserves.

In an assessment, when the reserve was at $44 billion by end of last fiscal, the IMF said the central bank overstated its reserves by $7.2 billion through the inclusion of non-reserve assets underestimating related risks, leading to an inflated reserve estimate.

HOW DID BANGLADESH END UP HERE?

According to the central bank’s data, from July-March of the current fiscal, the import of various commodities was worth $66.5 billion, which is 43.84 per cent higher than the last fiscal in the same period.

On remittances, in the same nine months, the expatriates have sent $17.31 billion, which is 16.25 per cent lower than the same period last fiscal.

Meanwhile, Bangladesh earned $43.34 billion by exporting goods, which is 35.14 per cent higher than the same period in last fiscal.

The data reveals that, on average, a billion US dollar deficit remained every month, which is putting immense pressure on the reserve.

WHAT MEASURES HAVE BEEN TAKEN SO FAR?

To stabilise an already dwindling economy and a currency market, a phenomenon some economists are calling “crisis at both ends”, the central bank has devalued the taka against the US dollar three times in the last two months.

It had ordered the banks in April to keep the cash margin at 25 per cent for letters of credit to import the non-essential products after the country’s trade deficit kept widening, posting a 64 per cent rise to around $25 billion year on year in the first nine months of the current fiscal year.

As import costs continued to rise, the Bangladesh Bank this month ordered the banks to raise the cash margin for the imports of cars and electronic home appliances. For imports of other non-essential products, the margin was set at 50 per cent.

Simultaneously, the government has also taken several measures- like putting a bar on civil servants’ foreign tours and pausing some development projects that require a large number of imported materials.

All these measures, though hailed partly by the analysts and economists, were evidently not enough to calm an edgy currency market, as the value of the US currency continued to shoot up further, rose to Tk 100 mark at one point this month, highest in Bangladesh’s history.

Which, begrudgingly, validates the question: is the current reserve enough for a growing Bangladeshi market, which is increasingly dependent on imports?

Economists and financial analysts, who have agreed to be interviewed for this article, are split on their opinions.

Some do not even consider the issue alarming. Development economist Dr Qazi Kholiquzzaman Ahmad is one of them.

While speaking to the bdnews24.com, the economist said there is nothing to be worried about the current state of the reserve.

“I don’t think it’s [the current reserve] bad. Yes, at present, it is not at the same state as it was before, but whatever we have now, is enough, I believe,” he said.

“A few years ago, the reserve rose to $30 billion mark. We weren’t worried then, rather we're happy to see the new benchmark. I'm not sure why we should be worried about it now?” he offered.

Zaid, the chairman of the Agarani Bank, however, criticises the mechanism of how the government is trying to “artificially” control the currency market.

“These measures are temporary. But the trend appears to be a long-term one. The government must address the issue of reducing demand and increase the supply flow of foreign currency in the market to keep it stable.”

Among the alarmists, some have suggested adopting a conservative monetary and budgetary policy to slow down the spending of the reserve, while some others pushed for introducing new measures to increase the size of the reserve.

Former lead economist of the World Bank’s Dhaka office, Zahid Hussain, believes it is high time the government and the central bank shifted gear to increase the size of the reserve.

“In normal times, according to an IMF policy that has been adopted as a global standard, a country needs to have a coffer [foreign exchange] to cover imports for three to five months. The global money lender has recently revised it, saying a reserve to cover imports for eight to 12 months can be considered as safe to stable a currency market since the global economy is hanging on the balance at the moment.”

The debate gained much momentum after Sri Lanka, a fellow SAARC nation, defaulted on its foreign debt, which resulted in social unrest and a volatile political climate.

Analysts are saying decades of macroeconomic mismanagement and massive foreign debt to spend on so-called mega projects were the main factors to push the country into such a precarious situation.

The situation in Sri Lanka is so dire that even global lenders like the IMF are declining to provide the island nation with a line of credit to survive.

According to the latest Economic Relations Division report, Bangladesh owes development partners and creditors $55.44 billion as of February.

Thanks to an uptick in foreign lines of credit, the number of development projects is rising in Bangladesh too, but that trend, according to some leading economists, should not be considered as a cautionary tale.

Since the independence, economist KAS Murshid believes, Bangladesh has always done an excellent job in managing its macroeconomics, though he believes it’s high time for the government to adopt a conservative approach.

“The GDP was higher than our foreign debt once. Not anymore though. The government needs to pay more attention to this,” he said.

Kholiquzzaman has high confidence in the structure of Bangladesh’s economy too.

“I know we need to take a careful approach from now on, but I have high confidence in our policymakers that they can manage it,” he said.