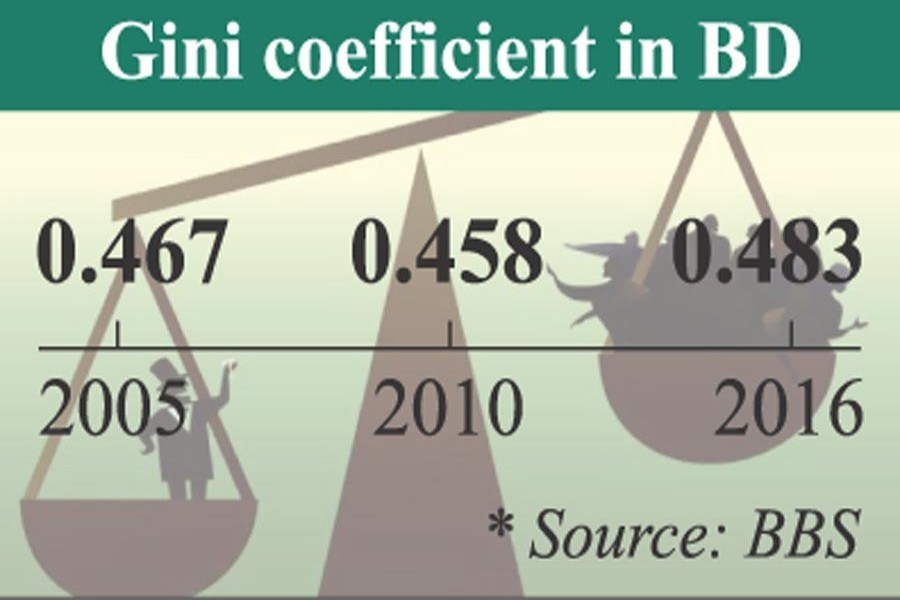 Income inequality in Bangladesh has widened further despite decline in the rate of poverty, dropping to 24.3 per cent last year from 31.5 per cent six years back.

Official findings in the Household Income and Expenditure Survey (HIES) 2016 unveiled Tuesday such a state of poverty, hunger and income of people in the country.

The survey, conducted by the state-run Bangladesh Bureau of Statistics (BBS), showed that the Gini coefficient, which measures income inequality within a country's population, increased to 0.483 from 0.458 in 2010.

According to the HIES 2016, the income inequality in the urban areas has risen faster than in the rural areas.

The national statistical body data showed that the Gini coefficient in urban areas was recorded 0.498 in 2016 against 0.452 in the HIES 2010.

Gini coefficient is the scale (from 0 to 1) for measuring the income inequality in a country where "0" indicates no inequality and "1" indicates the highest degree of inequality.

The BBS survey finds Bangladesh's extreme poverty having also declined to 12.9 per cent of the total population in 2016 from 17.6 per cent in 2010.

The BBS disseminated its preliminary findings in the HIES 2016 at its office in Dhaka with Planning Minister AHM Mustafa Kamal attending the function as chief guest.

HIES 2016 Project Director Dr Dipankar Roy presented the key points in the report on the survey, conducted across the country on 46,080 household samples for gathering data for the HIES.

According to the latest survey, the upper-line poverty was alleviated at the fastest pace in rural areas as it was cut to 26.4 per cent in 2016 from 35.2 per cent in 2010.

Rangpur Division tops the list in terms of highest poverty incidence as its rate is still higher at 47.2 per cent.

Mymensingh Division stands second in terms of higher poverty incidence as its hunger rate was recorded 32.8 per cent, followed by Rajshahi 28.9 per cent, Khulna 27.5 per cent, Barisal 26.5 per cent, Chittagong 18.4 per cent, Sylhet 16.2 per cent and Dhaka 16 per cent.

The latest HIES for the first time this year also showed the quarterly poverty data where the last quarter (January-March) indicated the highest 27.1 per cent poverty rate during the survey period.

On the other hand, in the first quarter of the survey period (April-June) poverty rate was the lowest 22.5 per cent which was showing an increasing trend in the following quarters, the BBS survey said.

At the function the WB Lead Economist, Dr Zahid Hossain, said although many indicators of Bangladesh are showing positive trends, the rise in income inequality is a bad news.

Another bad news for the country is lower pace of poverty alleviation between the latest survey period 2016 and the past survey of 2010 compared to the previous survey periods, he said.