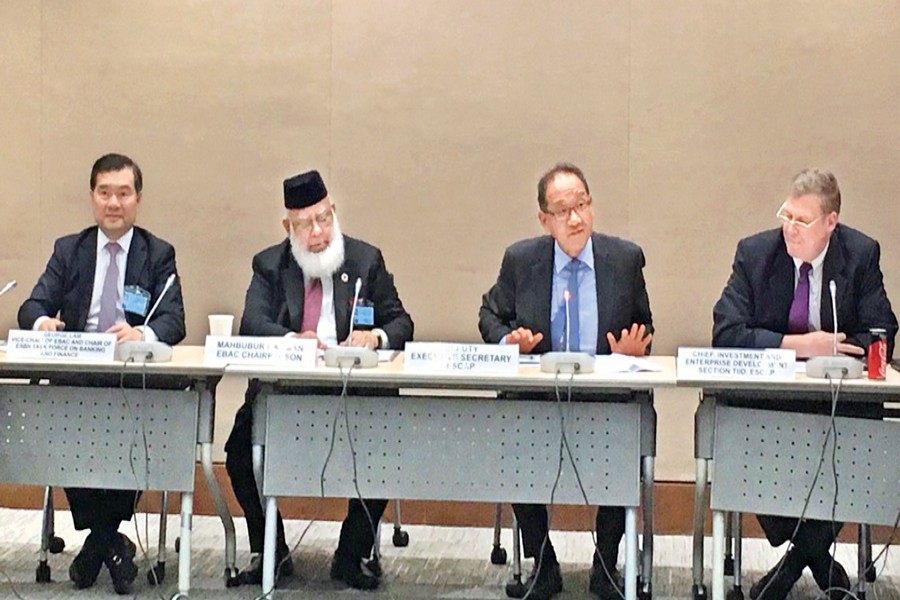 The thirteenth meeting of the ESCAP Business Advisory Council (EBAC) was held at UNESCAP in Bangkok on Monday. EBAC Chairman and ICC Bangladesh (ICC-B) President Mahbubur Rahman presided over the day-long meeting.

The EBAC chairman in his speech in the programme said considering the present global scenario, the private sector has to join hands with the international bodies and governments to agree on a mechanism for business engagement.

In this aspect, EBAC and ESCAP together can make a difference for the region, he added.

Mr Mahbubur Rahman said: "Today's meeting is important, as we are going to discuss a restructuring of the way ESCAP engages the business sector. It will set the direction of the role of business in partnering with ESCAP to achieve the SDGs".

He also wished to receive full cooperation of the members and ESCAP Secretariat in carrying out the future activities of EBAC, Asia Pacific Business Forum (APBF) and ESCAP Sustainable Business Network (ESBN).

The proposal by Hong Kong to host APBF 2018 in the country on April 10-11 was adopted during the meeting. It was suggested that the theme of APBF 2018 will be linking business with SDGs through technology and financing.

Hongjoo Hahm, Deputy Executive Secretary of ESCAP, in his opening statement appreciated the role played by the private sector since the establishment of EBAC, APBF and ESBN.

He said a concept paper for consideration of the members has been placed in the meeting in order to strengthen the EBAC/ESBN and APBF. The restructuring of EBAC and ESBN, proposed by ESCAP, will help in working together with the private sector to achieve the SDGs.

The progress of the ongoing and new projects/initiatives of 10 ESBN taskforces was presented during the meeting. The taskforces are formed on: Banking and Finance, Digital Economy, Green Business, Innovation and Competitiveness, Trade and Transport Facilitation, Disaster and Climate Risk Reduction, Young Entrepreneurship, Agriculture and Food and Pacific Issues.