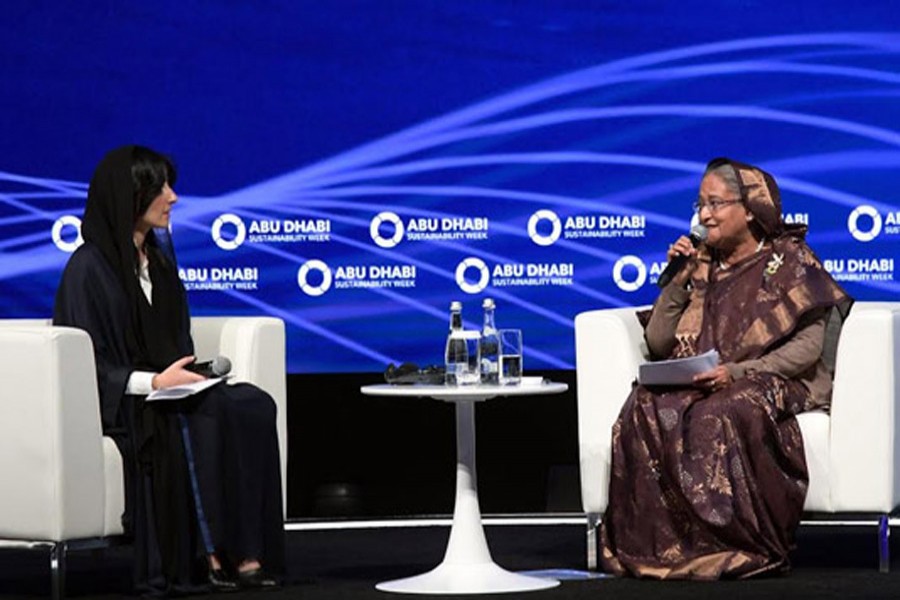 Prime minister Sheikh Hasina has said Bangladesh is now on right track to attain the Sustainable Development Goals (SDGs) due to her government’s time-befitting initiatives.

“We achieved spectacular success in achieving the Millennium Development Goals (MDGs) and we’re already on right track to achieve the SDGs,” she said while replying questions in an interview session at the “Future Sustainability Summit” on Tuesday.

The interview session titled ‘The Critical Role of Women in Delivering Climate Action’ of the Future Sustainability Summit was held at the Abu Dhabi National Exhibition Centre in Abu Dhabi.

Stating that Bangladesh was closely engaged with the negotiations to develop the SDGs at the United Nations, the prime minister said, “We consider that it (developing SDGs) is a historic decision taken by all countries for the people of the world.”

She came up with the opinion that if development is not visible for a long term and rather creates discrimination and further inequality, then this may be considered as material growth, not development.

Sheikh Hasina, however, stressed the need for adopting inclusive policies so that economic growth is transformed into sustainable development and social benefit.

Replying to another question, she said, “We had declared our vision 2021 and vision 2041 as much before the SDGs and we had incorporated inclusiveness and sustainability in our visions.”

The premier went on saying:”We understood that development problems were not always caused by lack of resources but also lack of equitable distribution.”

Sheikh Hasina said her government has identified several categories of marginalised or vulnerable groups for special attention like women and children, generally poor community, the disabled and small ethnic communities.

Spelling out various measures taken for upliftment of the marginalised people, she said, “I started with education and my government has nationalised 26,193 private primary schools and 685 secondary high schools.”

The premier mentioned that tuition fees are waived for girl students up to 12th grade and for larger inclusion of autistics and people with special needs, the government is providing free specialised training.

In this context, she said that now six million poor families are organised through more than 101,042 village co-operative societies under the project ‘My House, My Farm’ across the country.

Sheikh Hasina said nearly a quarter of all the families in the country have been covered under the social safety net programmes, BSS reported.

The premier said that her government has been providing cash in various forms to freedom fighters, widows and victims of domestic violence, persons and students with disabilities, gypsies and disadvantaged communities, tea garden workers, poor and lactating mothers and even to the persons of third gender.

About Rohingyas, she said that Bangladesh has been providing all necessary physical support services including food, housing, health and other emergency services to over 1.1 million forcibly displaced Myanmar nationals.

On climate issue, the prime minister said that though Bangladesh is not responsible for carbon emission, it is one of the worst sufferers of the climate changes caused by the carbon emission.