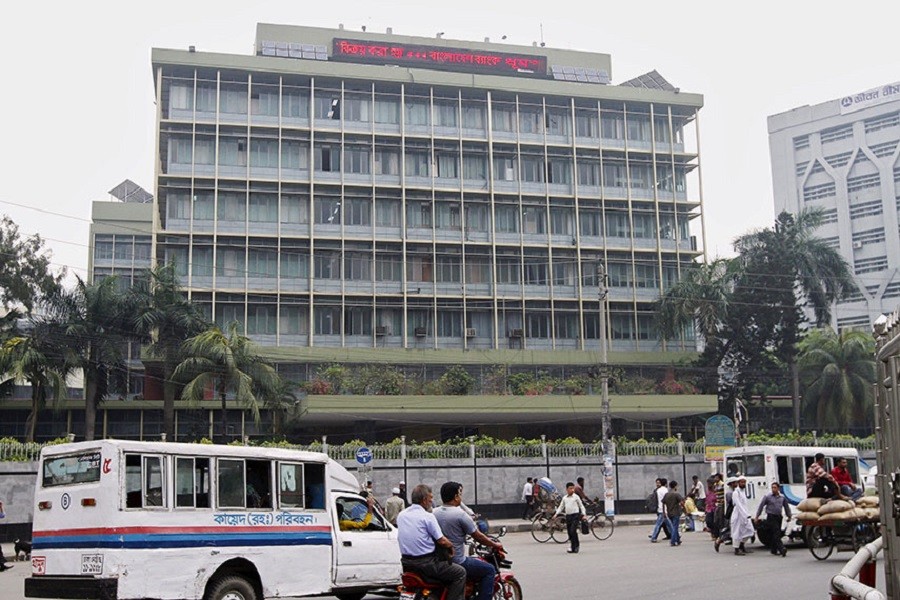 A man rides a motorcycle past the Bangladesh Bank in Motijheel, the bustling commercial hub in capital Dhaka. Reuters/Files

Bangladesh Bank advised the banks which have exchange houses abroad to appoint agents in the respective countries to help prop up falling inward remittances.

All banks have also been asked to extend cooperation in ensuring mandatory opening of account of each outbound worker before their departure for foreign destinations.

The instructions were made at a meeting with senior executives of top 20 remittance-recipient banks at the central bank headquarters in Dhaka on Tuesday with BB Deputy Governor SK Sur Chowdhury in the chair.

The meeting also discussed different issues including the use of latest technologies under digital payment systems to encourage non-resident Bangladeshis (NRBs) to send their hard-earned money through banking channel instead of 'hundi.'

Besides, leaks in channeling small-sized remittances through non-bank channels came up for discussion, meeting sources said.

The central bank's latest moves came against the backdrop of a sharp fall in inward remittances in the month of September despite close monitoring by the governing bank.

"We've advised the banks to increase the flow of inward remittance through using the mobile financial services (MFS)," Mr. Sur Chowdhury told the FE after the meeting.

He said the central bank also asked the banks to extend their all-out support for opening account of each expatriate worker mandatorily before leaving the country.

Mentioning the names of two banks, the deputy governor also advised that the banks appoint agents abroad for propping up the inflow of remittances in the near future.

Earlier, Prime Bank Limited and BRAC Bank Limited had appointed agents in the United Kingdom to raise the flow of remittances from that country.

"The number of transactions has increased by 36 per cent from the UK after the appointing of 10 agents in the country in July this calendar year," Ahmed Kamal Khan Chowdhury, managing director of the Prime Bank Limited, told the FE.

He also believes that the flow of inward remittances will increase if the banks concerned set such agents in the respective countries.

The banks will, however, have to ensure proper monitoring of such agents for avoiding anti-money laundering and terrorist- financing risks, the senior banker explained.

"We're now planning to appoint such agent in other countries, too, to expedite our inflow of remittance," the Prime Bank MD said.

Currently, 29 exchange houses of 15 commercial banks are operating across the globe to expedite the inflow of foreign currencies from the wage earners.

Besides, all banks have already set up 1184 drawing arrangements abroad for collection of remittances from different parts of the world.

At the meeting, the banks were also asked to build up mass awareness both at home and abroad about advantages of sending money through banking channel using different TVCs (television commercials).

The September inflow of remittance dropped by more than 39 per cent to US$853.73 million-the lowest monthly receipt in seven years-from $1.42 billion in August 2017. It was $1.06 billion in September last calendar year.