As the quartet breaks up, central banking leadership flux looms 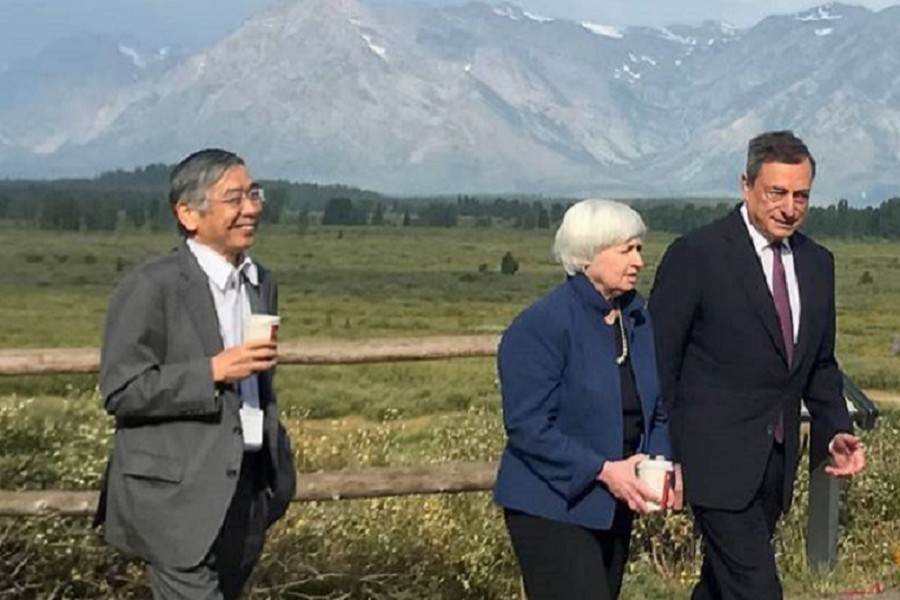 The leaders of the world’s top central banks who risked trillions of dollars and their reputations to rescue the global economy are now set to walk off stage at a time when the lingering effects of the crisis, evolving technology and a combustible political landscape will challenge their successors.

The Federal Reserve, the Bank of Japan and the People’s Bank of China may all have new bosses in early 2018 and there will be a new head of the European Central Bank the following year.

The new leaders will have to deal with the hangover from the 2007-2009 crisis and its immediate aftermath as well as newly emerging risks.

Some $10 trillion in assets bought by the Fed, the ECB and the BOJ to prop up their economies remains on the books and will have to be pared back. Stubbornly low global inflation and weak growth complicate the return to more conventional policies. There are unfinished reforms in China and Europe, while the rise of nationalism could erode central bank independence.

Further ahead, the spread of cryptocurrencies and other technologies threatens to weaken central bank control over the financial system.

“The bad news is that in a crisis people learn by doing,” said Vincent Reinhart, chief economist at investment firm Standish Mellon and a longtime official at the Federal Reserve. “Will the next set of people have the set of experiences that allows them to do that? Will they have a test?”

The changing of the guard could veer in unpredictable directions. China’s president is considering a provincial official to succeed Zhou Xiaochuan, a veteran policymaker who has led the central bank since 2002 and whom analysts regard as a champion of reforms that could falter without his leadership.

In the United States, President Donald Trump will have the opportunity to infuse his “America First” sensibility at the Fed, an institution with an undeniable global role, when Chair Janet Yellen’s term ends in early February.

BOJ Governor Haruhiko Kuroda’s shock-and-awe record monetary stimulus gets credited for helping Japan snap out of years of stagnation. He will see his term end next April with the economy expected to keep growing, but inflation still far from his target, fueling doubts about the overall effectiveness of his policy.

ECB President Mario Draghi will be around until late 2019, but the succession battle could renew tensions over Britain’s departure from the European Union, ways of aligning the interests of economic superpower Germany with the rest of Europe, and concerns that the rise of nationalism could impair the ECB’s ability to set monetary policy for 19 countries.

“Given the divisions in Europe both politically and economically, you could have a very large swing in ECB behavior,” said Adam Posen, president of the Peterson Institute for International Economics.

Yellen, Kuroda and Zhou appeared together on Sunday to talk about the global economy on the sidelines of the International Monetary Fund and World Bank annual meetings.

It was a “farewell concert” of sorts for a group whose tenure has transformed central banking.

With rare exceptions, monetary policymakers from different countries avoid any hint of direct coordination with each other, and primarily tailor policies to domestic needs. Still, the four in charge now have shared years at the helm of the global financial system, met and talked at countless international meetings, and managed a major crisis together.

Along the way they deployed open-ended central bank asset purchases, introduced negative interest rates, salvaged the euro zone from a possible fracture, and steered China, now the world’s second largest economy, toward more openness and currency reforms. Yellen, a top Fed official since 2004, both helped craft the crisis response and steered the Fed’s to a more conventional policy.

NEW SCORE FOR A NEW BAND

Some continuity is possible. Yellen and particularly Kuroda could be reappointed when their terms expire next spring, and one of the top candidates to run the PBOC is cut from the same reformist mold as Zhou, who is expected to retire in the first half of 2018.

“I am not sure that all three will actually leave,” Jeroen Dijsselbloem, the chairman of euro zone finance ministers, who will himself leave his post in January, told Reuters.

“In general, losing experience is always a risk. But it is also a fact of life.”

But the odds now seem that by early next year the world’s two largest economies will have new and potentially more inward looking, central bank leadership.

Zhou’s successor will face an immediate choice of how aggressively to continue the policy transition toward market-based norms, and how to resolve a suspected mountain of bad debt on provincial and corporate books.

In the United States, some of the candidates being considered to replace Yellen are at odds with her on interest rates, inflation, and how to fight severe downturns.

Bank of Japan board member Sayuri Shirai said the Fed’s smooth transition from the era of near zero rates and bond buying to one of steadily tighter monetary policy was a testament to Yellen’s steady hand and good communication.

The calm “is attributable to the Fed’s improved communications skills with markets under Yellen’s leadership,” she said.

Reinhart said that in a sense major central banks are already in a transition as the current leaders tackle issues in a way that could help make the handoff smooth.

Whoever Trump names to run the Fed, for example, will have a clear “gradual” interest rate path and a balance sheet reduction plan to rely on, at least at first. Draghi is also expected to reduce the ECB’s bond buying and take the initial steps toward more conventional monetary policy over the remainder of his term.

Zhou set the stage for the renminbi’s broader use as a global currency whose value is determined by market forces, sparing his successor the internal and international tensions over China’s managed exchange rate.

It will be up to the newcomers, though, to be vigilant about new problems. Financial regulation is still evolving, and few governments appear willing to tackle high debts and rising entitlement spending, or have successfully confronted the changing nature of work and wages.

“We don’t yet have the right set of tools and ideas to tackle that.”