US sending 3,000 additional troops to Poland 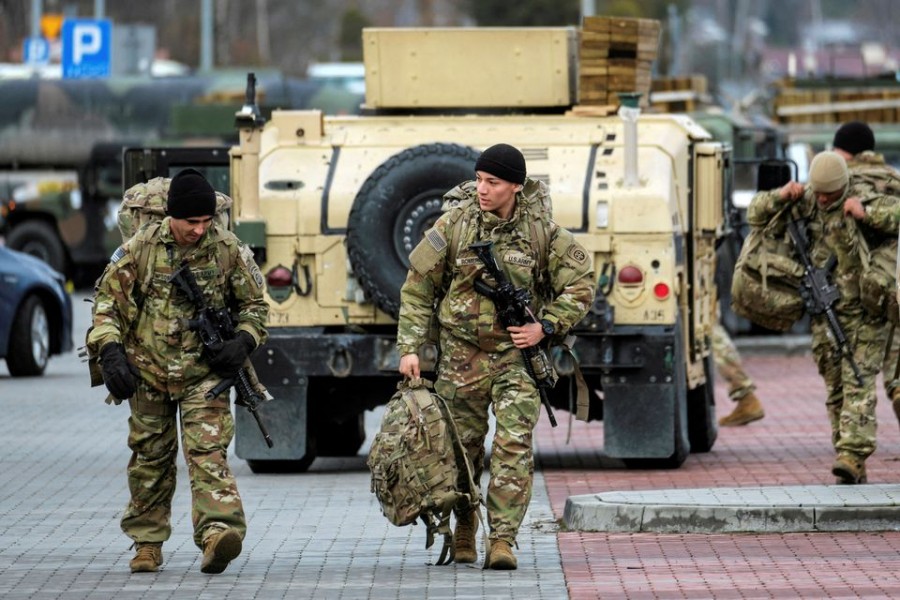 US soldiers from the 82nd Airborne Division walk near the G2A Arena following their arrival at Rzeszow-Jasionka Airport, in Jasionka, Poland on February 8, 2022 — Patryk Ogorzalek/Agencja Wyborcza.pl via REUTERS

The United States will send 3,000 additional troops to Poland, Poland's Defence Minister said late on Friday, confirming an earlier Reuters report, as Russia held military exercises in Belarus and the Black Sea following the buildup of its forces near Ukraine.

The additional troops will be sent to Poland in the coming days, four US officials told Reuters news agency on Friday.

The deployment comes as Washington steps up warnings that Russia could be poised to invade Ukraine. Russia denies it plans to invade, saying it is defending its own security against aggression by NATO allies.

Polish Defence Minister Mariusz Blaszczak wrote on Twitter late on Friday that Poland is ready to welcome the US troops anytime.

"The U.S. administration will send additional 3,000 troops to Poland due to the tense situation in Ukraine. I spoke today about this issue with (U.S. Defence Secretary Lloyd) Austin," he said. "We are ready at any time to welcome U.S. soldiers to Poland."

The officials, speaking to Reuters on condition of anonymity, said the US troop deployment will come from the 82nd Airborne Division based at Fort Bragg, North Carolina, and not from within US forces in Europe.

They are expected to be in Poland by next week, they said.

One of the officials described it as a significant deployment.

Another official said the deployment order was signed by Austin at the direction of President Joe Biden.

The soldiers are in addition to the 8,500 troops already on alert to be ready to deploy to Europe if needed and the nearly 3,000 American troops the administration said earlier this month it would deploy to Poland and Romania.

A spokesperson for Poland's Defence Ministry did not confirm any additional details about timing or where the troops would be coming from.

Russia has already massed more than 100,000 troops near Ukraine, and this week it launched joint military exercises in neighbouring Belarus and naval drills in the Black Sea.

While it denies plans to invade Ukraine, Moscow has said it could take unspecified "military-technical" action unless a series of demands are met, including promises from NATO never to admit Ukraine and to withdraw forces from Eastern Europe.

The United States and Britain have both warned an invasion could come within days.

The Biden administration has urged American citizens to leave Ukraine now, stressing it will not send US troops into Ukraine to help them flee the country if there is a Russian invasion.

While the United States does not have any ships in the Black Sea currently, the US Navy has sent four additional destroyers to Europe in recent weeks.