US says Russian invasion of Ukraine could come at any time 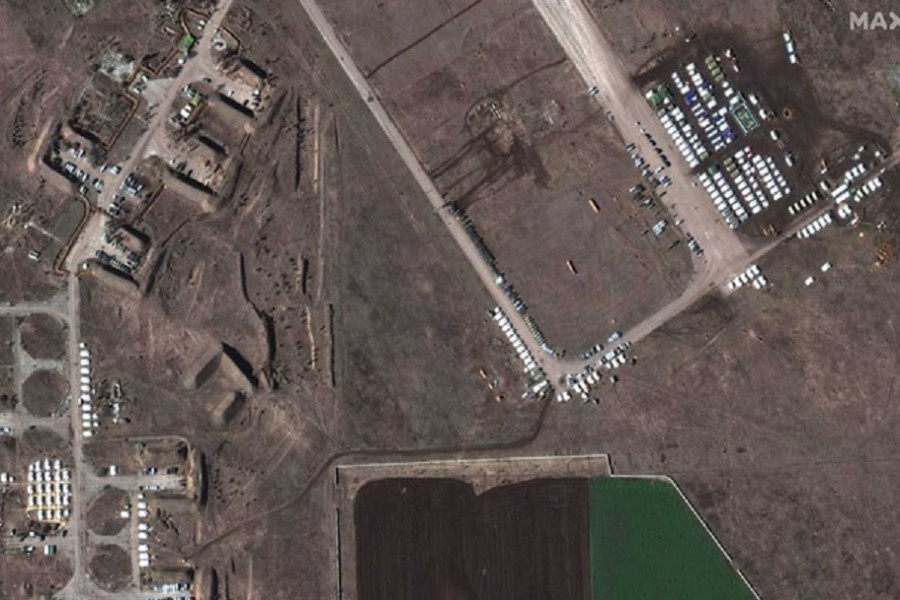 A satellite image shows a tent camp and equipment at the northern end of Oktyabrskoye air base, Crimea February 10, 2022. 2022 Maxar Technologies/Handout via REUTERS

Russia is now massing yet more troops near Ukraine and an invasion could come at any time, perhaps before the end of this month's Winter Olympics, US Secretary of State Antony Blinken said on Friday.

In his starkest warning yet to Americans in Ukraine to get out now, President Joe Biden said he would not send troops to rescue US citizens in the event of a Russian assault.

Blinken, visiting Australia, told a news conference: "We're in a window when an invasion could begin at any time, and to be clear, that includes during the Olympics."

Russia has already massed more than 100,000 troops near Ukraine, and this week it launched joint military exercises in neighbouring Belarus and naval drills in the Black Sea.

Moscow denies plans to invade Ukraine, but says it could take unspecified "military-technical" action unless a series of demands are met, including promises from NATO never to admit Ukraine and to withdraw forces from Eastern Europe.

Several Western countries launched diplomatic pushes this week to persuade Russia to back down, but Moscow brushed them off, yielding no concessions to French President Emmanuel Macron who visited on Monday and openly mocking British Foreign Secretary Liz Truss during a visit on Thursday.

Four-way talks in Berlin between Russia, Ukraine, Germany and France, part of a longstanding peace process in a conflict between Ukraine and Russian-backed separatists, also yielded no progress on Thursday.

Paris said the Russian delegation had agreed to hold more talks but demanded Kyiv negotiate directly with the separatists, a "red line" which Ukraine has rejected since 2014.

US-based Maxar Technologies, which has been tracking the buildup of Russian forces, said images taken on Wednesday and Thursday showed new deployments in several locations in western Russia, Belarus and Crimea, which Russia annexed in 2014.

The images could not be independently verified by Reuters.

In Crimea Maxar identified 550 troop tents and hundreds of vehicles newly deployed at Oktyabrskoye airfield north of the city of Simferopol, as well as deployments near the towns of Novoozernoye and Slavne.

In Belarus it identified a new deployment of troops, military vehicles and helicopters at Zyabrovka airfield near Gomel, less than 25 km (15 miles) from the border with Ukraine. And in western Russia it found a large new deployment of troops and forces at the Kursk training area, approximately 110 km (68 miles) to the east of the Ukrainian border.

Russia has not disclosed how many troops it has deployed and says it has the right to move forces around on its territory as it sees fit. It insists they pose no external threat.