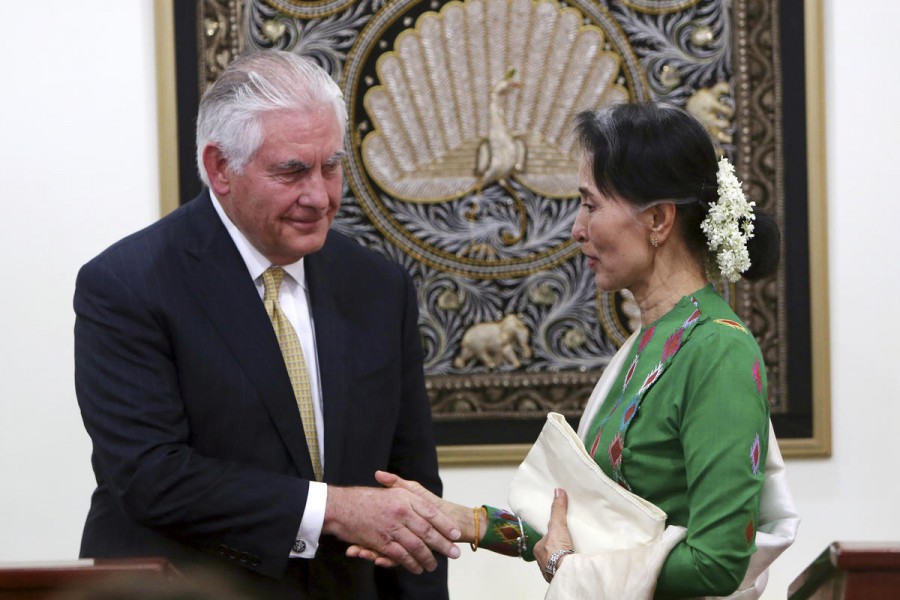 United States Secretary of State Rex Tillerson has said that his country is profoundly concerned by ‘credible reports’ of atrocities committed by Myanmar's security forces.

In the wake of violence committed in Myanmar, US has called for an independent investigation into a humanitarian crisis in which hundreds of thousands of Muslim Rohingya have fled to Bangladesh, the top diplomat added.

Speaking at a joint news conference with leader Aung San Suu Kyi in Myanmar's capital on Wednesday, Tillerson said the US would consider individual sanctions against people found responsible for the violence, but he would not advise "broad-based economic sanctions" against the entire country, reports UNB.

"All of that has to be evidence-based," Tillerson said. "If we have credible information that we believe to be very reliable that certain individuals were responsible for certain acts that we find unacceptable, then targeted sanctions on individuals very well may be appropriate," he said.

Tillerson's one-day visit comes as a new report said there is "mounting evidence" of genocide against the Rohingya in Myanmar's Rakhine state, where a government security operation has caused nearly 620,000 Rohingya to flee to neighbouring Bangladesh.

Tillerson also met with Myanmar's powerful military chief, Min Aung Hlaing, who is in charge of operations in Rakhine.

A senior US State Department official said Tuesday that Tillerson would use the visit to "express concerns over the displacement and violence and insecurity affecting Rohingya populations and other local populations and discuss ways to help Burma stakeholders implement commitments aimed at ending the crisis and charting productive ways forward."

Myanmar was formerly known as Burma.

Though Suu Kyi has been the de facto head of Myanmar's civilian government since her party swept elections in 2015, she is limited in her control of the country by a constitution written under the military junta that ruled Myanmar for decades. The military is in charge of the operations in northern Rakhine, and ending them is not up to Suu Kyi.

Still, Suu Kyi has faced widespread criticism for not speaking out in defence of the Rohingya. At Wednesday's news conference Suu Kyi denied she had been silent on the issue, saying she had personally commented on the situation as well as issued statements through her office.

But UN human rights chief Zeid Ra'ad al-Hussein said he was "hugely disappointed" in Suu Kyi, noting that he appealed to her after a smaller scale flight of Rohingya last October "to use all her emotional standing and moral standing inside the country to confront the military and put an end to this."

"Evidently, she was unable to do that and now she speaks in compassionate terms," he said in response to a question after a lecture at Columbia University on Tuesday.

But Zeid said he fears the Rohingya who have fled to Bangladesh since Aug. 25 won't be able to return "because the operations were so systematic, so organised, so well-planned, that . there was intent involved."

"I believe it rises to the threshold of very serious violations . international crimes," he said.

US congressional pressure is mounting on the Trump administration to take punitive steps against Myanmar. The US House of Representatives passed a non-binding resolution Wednesday condemning "murderous ethnic cleansing and atrocities against civilians." It called on President Donald Trump to impose sanctions on those responsible for human rights abuses, including members of Myanmar's military and security services.

The report by the United States Holocaust Memorial Museum and the advocacy group Fortify Rights found there is "mounting evidence" of genocide against the Rohinyga. It accused security forces and civilians of mass killings - including burning victims alive including infants - rape and other abuses, and called on the international community to take action.

Myanmar's military has denied the accusations, most recently with a statement Monday. The military said it had interviewed thousands of people during a monthlong investigation into the conduct of troops in Rakhine after Rohingya insurgents launched a series of deadly attacks there on Aug. 25.

While the report acknowledged that battles against militants from the Arakan Rohingya Salvation Army had left 376 "terrorists" dead, it also claimed security forces had "never shot at the innocent Bengalis" and "there was no death of innocent people."

Myanmar's government and most of the Buddhist majority say the members of the Muslim minority are "Bengalis" who migrated illegally from Bangladesh, and do not acknowledge the Rohingya as a local ethnic group even though they have lived in Myanmar for generations.

Zeid, the U.N. high commissioner for human rights, said he was also "very unhappy" that the communique from the summit of the Association of Southeast Asian Nations in the Philippines didn't even use the word Rohingya.

"How much more do they need to suffer before they are recognised by some of these leaders?", he asked.

"If we allow this to happen at zero cost ... how many other countries with minorities would be only too willing, if they want to remove a so-called "problem" from their society, to follow suit in similar ways?", Zeid asked.