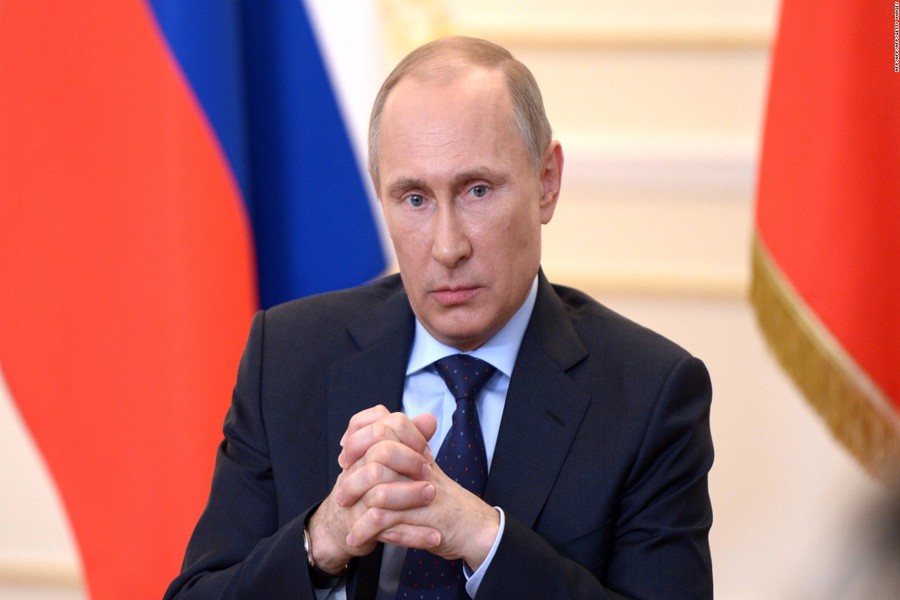 They have flourished during the reign of President Vladimir Putin, fulfilling a demand by Congress that the US punish Moscow for interfering in the 2016 US election.

Some US lawmakers accused President Donald Trump of giving Russia a free pass, fueling further questions about whether the president is unwilling to confront America’s Cold War foe.

Known informally as the “Putin list,” the seven-page unclassified document is a who’s who of politically connected Russians in the country’s elite class.

The idea, as envisioned by Congress, is to name-and-shame those believed to be benefiting from Putin’s tenure just as the United States works to isolate his government diplomatically and economically.

Being on the list doesn’t trigger any US sanctions on the individuals, although more than a dozen are already targeted under earlier sanctions.

Prime Minister Dmitry Medvedev is among the 114 senior political figures in Russia’s government who made the list, along with 42 of Putin’s aides, Cabinet ministers such as Foreign Minister Sergey Lavrov, and top officials in Russia’s leading spy agencies, the FSB and GRU. The CEOs of major state-owned companies, including energy giant Rosneft and Sberbank, are also on the list.

So are 96 wealthy Russians deemed “oligarchs” by the Treasury Department, which said each is believed to have assets totaling $1 billion or more. Some are the most famous of wealthy Russians, among them tycoons Roman Abramovich and Mikhail Prokhorov, who challenged Putin in the 2012 election. Aluminum magnate Oleg Deripaska, a figure in the Russia investigation over his ties to former Trump campaign chairman Paul Manafort, is included.

The Trump administration had until Monday to issue the list under a law passed last year. After declining to answer questions about it throughout the day Monday, the Treasury Department released it with little fanfare 12 minutes before midnight.

Even more names, including those of less-senior politicians or businesspeople worth less than $1 billion, are on a classified version of the list being provided to Congress, officials said. Drawing on US intelligence, Treasury also finalized a list of at least partially state-owned companies in Russia, but that list, too, was classified and sent only to Congress.

There was no immediate comment early Tuesday from the Kremlin or the Russian Embassy in Washington, reports AP.

In the works for months, the list has induced fear among rich Russians who are concerned that it could lead to US sanctions or to being informally blacklisted in the global financial system. It triggered a fierce lobbying campaign, with Russia hawks in Congress pushing the administration to include certain names and lobbyists hired by Russian businessmen urging the administration to keep their clients off.

The list’s release was likely to at least partially diffuse the disappointment from some lawmakers that Trump’s administration opted against targeting anyone with new Russia sanctions that took effect Monday.

Under the same law that authorized the “Putin list,” the government was required to slap sanctions on anyone doing “significant” business with people linked to Russia’s defense and intelligence agencies, using a blacklist the US released in October. But the administration decided it didn’t need to penalize anyone, even though several countries have had multibillion-dollar arms deals with Russia in the works.

State Department officials said the threat of sanctions had been deterrent enough, and that “sanctions on specific entities or individuals will not need to be imposed.”

“We estimate that foreign governments have abandoned planned or announced purchases of several billion dollars in Russian defense acquisitions,” said State Department spokeswoman Heather Nauert. She did not provide evidence or cite any examples.

Companies or foreign governments that had been doing business with blacklisted Russian entities had been given a three-month grace period to extricate themselves from transactions, starting in October when the blacklist was published and ending Monday. But only those engaged in “significant transactions” are to be punished, and the United States has never defined that term or given a dollar figure. That ambiguity has made it impossible for the public to know exactly what is and isn’t permissible.

Late last year, Secretary of State Rex Tillerson said one reason the US was proceeding cautiously was that major US allies have much at stake. Turkey, a NATO ally, has a deal to buy the S-400, Russia’s most advanced air defense missile system. And key security partner Saudi Arabia recently struck an array of deals with Moscow, including contracts for weapons. It was unclear whether either country had since abandoned those deals to avoid running afoul of the US sanctions.

New York Rep. Eliot Engel, the top Democrat on the House Foreign Affairs Committee, lambasted the move to punish no one, saying he was “fed up” and that Trump’s administration had chosen to “let Russia off the hook yet again.” He dismissed the State Department’s claim that “the mere threat of sanctions” would stop Moscow from further meddling in America’s elections.

“How do you deter an attack that happened two years ago, and another that’s already underway?” Engel said. “It just doesn’t make sense.”