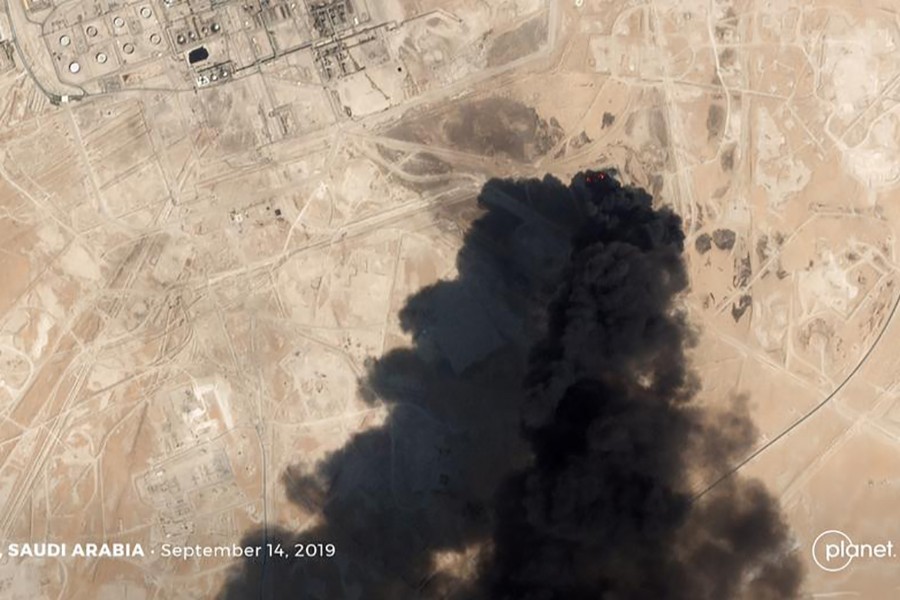 The United States has issued satellite images and cited intelligence to back its claim that Iran was behind attacks on Saudi oil facilities.

Iran denies involvement in Saturday's air attacks, which were claimed by Iran-aligned Houthi rebels in Yemen.

But unnamed US officials speaking to US and international media say the direction and extent of the attacks cast doubt on Houthi involvement.

The incident has cut global oil supplies by 5 per cent and prices have soared.

What is the US saying?

Secretary of State Mike Pompeo blamed Iran at the weekend, without providing any evidence, prompting Tehran to accuse Washington of deceit.

Unnamed US officials have been speaking to the New York Times, ABC, and Reuters.

One official said there were 19 points of impact on the targets and the attacks had come from the west and north-west - not Houthi-controlled territory in Yemen, which lies to the south-west of the Saudi oil facilities.

The officials said that could suggest launch sites in the northern Gulf, Iran or Iraq.

A close-up image of damaged tanks at the Abqaiq processing plant appeared to show impact points on the western side.

Officials quoted by the New York Times said a mix of drones and cruise missiles might have been deployed, but that not all hit their targets at Abqaiq and the Khurais oilfield.

ABC quotes a senior US official as saying that Mr Trump was fully aware that Iran was responsible.

What are the oil markets doing?

The oil price has surged.

Brent crude jumped 10 per cent to $66.28 a barrel, in what Bloomberg describes as the biggest intraday surge since 1988.

Prices eased slightly after President Trump authorised the release of US reserves.

How has Iran reacted?

Iran has yet to respond to the latest US assertions.

He was referring to the Trump administration's stated "maximum pressure campaign" which has targeted Iran with sanctions since Washington pulled out of an international agreement to limit the scope of Iran's nuclear programme.

The Houthis have repeatedly launched rockets, missiles and drones toward populated areas in Saudi Arabia. The attacks have left at least four civilians dead.

Yemen has been devastated by a conflict that escalated in March 2015, when the Houthis seized control of much of the west of the country and forced President Abdrabbuh Mansour Hadi to flee abroad.

Alarmed by the rise of a group they believed to be backed militarily by regional Shia power Iran, Saudi Arabia and eight other mostly Sunni Arab states began an air campaign aimed at restoring Mr Hadi's government and imposed a partial blockade on Yemen.

The UN says the conflict has claimed the lives of at least 7,290 civilians and left 80% of the population - 24 million people - in need of humanitarian assistance or protection, including 10 million who rely on food aid to survive.

Houthi military spokesman Yahya Sarea said on Saturday that operations against Saudi targets would "only grow wider and will be more painful than before, so long as their aggression and blockade continues".