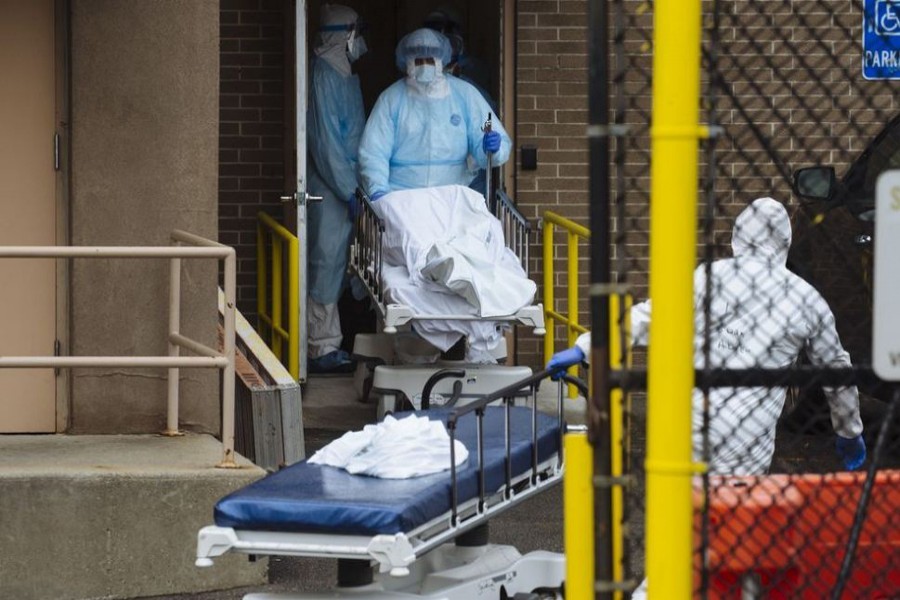 The coronavirus pandemic reached a grim new milestone in the United States on Friday with the nation's cumulative death toll from COVID-19 surpassing 900,000, even as the daily number of lives lost has begun to level off, according to data.

The latest tally marks an increase of more than 100,000 US COVID-19 fatalities since Dec 12, coinciding with a surge of infections and hospitalizations driven by the highly contagious omicron variant of the virus, reports Reuters.

Preliminary evidence has shown that omicron, while far more infectious, generally causes less severe illness than earlier iterations of the virus, such as delta. But the sheer volume of omicron cases fueled a surge in hospitalisations that has strained many US healthcare systems to their limits in recent weeks.

Experts have said the bulk of omicron patients requiring hospitalisation were unvaccinated individuals and people with other underlying chronic health conditions.

Data also suggests that omicron may have hit the United States harder than other countries with younger overall populations, such as in Africa.

As of Friday, according to Reuters' running tally of state-reported data, the total number of American lives lost to COVID-19 since the first US cases were detected in early 2020 has reached at least 904,228, more than the entire population of South Dakota.

US President Joe Biden, whose first year in office has been dogged by a pandemic that has proven more implacable than was expected - due in part to many Americans' hesitancy to get vaccinated - used the occasion to urge greater vaccine uptake.

On the eve of his inauguration in January 2021, Biden led a national memorial observance to honor the 400,000 Americans who had then perished from COVID-19, 11 months after the virus claimed its first US life.

The latest tally stands as the highest number of COVID-19 deaths reported by any nation, followed by Russia, Brazil and India with more than 1.8 million deaths combined. In terms of coronavirus fatalities per capita, the United States ranks 20th, well below the top two - Peru and Russia.

Nevertheless, the US COVID-19 death rate appears to be slowing as the omicron surge wanes, figures show. The seven-day average fell for two days in a row to 2,592, compared with a peak average of 2,674 in the current wave of infections. By comparison, the peak during the delta wave in January 2021 was an average of 3,300 deaths a day.

Some public health officials have said that as the omicron outbreak recedes and hospitalisations decline, the pandemic may enter a new phase in the United States and elsewhere.

In the state of Iowa, for example, the governor announced on Friday that a public health disaster proclamation, and special safety measures that go with it, would expire on Feb 15.

"The flu and other infectious illnesses are part of our everyday lives, and coronavirus can be managed similarly," Governor Kim Reynolds tweeted.

Nationally, confirmed COVID-19 cases are now averaging 354,000 a day, half of what was reported less than two weeks ago and down from the peak of nearly 806,000 infections a day on Jan 15. Many infections, however, go uncounted because they are detected by home-testing kits and not reported to public health authorities, officials say.

Over the past seven days, the states reporting the most new cases per capita were Alaska, Kentucky, Washington state, South Carolina and North Dakota.