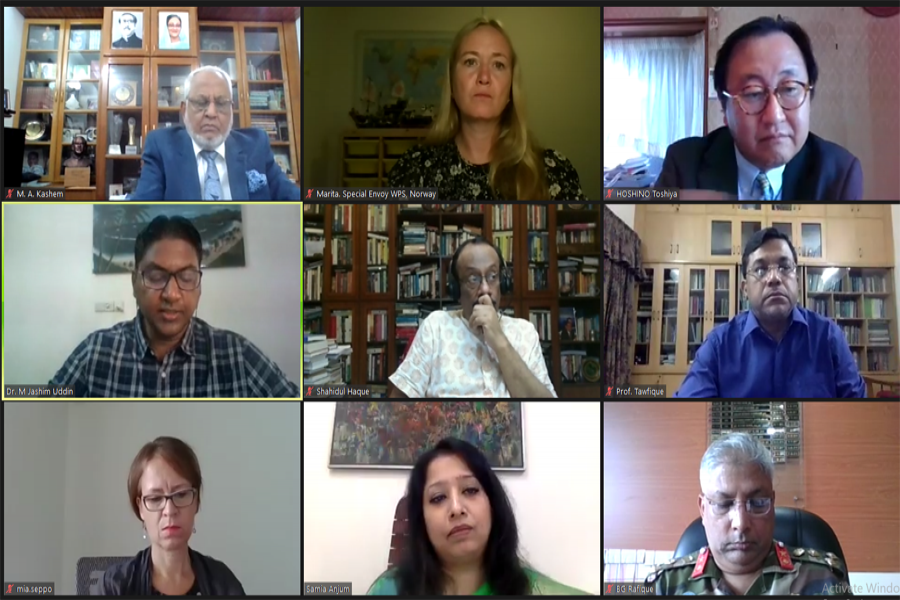 A panel of rights activists, academics and diplomats on Wednesday called for addressing economic, cultural and human rights issues affecting all nations on earth to regain dwindling global public confidence in the United Nations system.

The panelists at an international conference lamented that the issues, such as migration-- more pertinent to countries like Bangladesh-- remain neglected at the UN forum while the world is increasingly being dominated by powerful ultranationalist forces.

They emphasised a paradigm shift for the global body, also in the context of Covid-19 pandemic, as they came up with diverse, critical views at the international webinar on “The UN in Times of People’s Needs: Rethinking Multilateralism”, organised by North South University’s Center for Peace Studies (CPS) with support from the United Nations office in Bangladesh, to mark the 75th anniversary of the UN.

“The United Nations has been unjust and unfair to the overwhelming majority of the world. The UN has failed to balance between multilateralism and sovereignty of states and that’s been a big challenge for the UN,” Professor Mizanur Rahman, former chairman of National Human Rights Commission said.

Terming the UN ‘a club of big powers’, he mentioned that the more powerful the states are the more they violated the UN principles. He pointed out that the UN does not address the issues of the smaller players but some ‘rogue states’ violate the UN human rights principles.

“Our philosophy, our intention are not reflected in the international human rights documents. Human rights are being measured on a scale which is almost completely a western scale,” Professor Mizan recalled and added that changes would not be possible without addressing an unjust economic order and incorporating the peoples’ economic, social and cultural rights.

Farah Kabir, country director of ActionAid Bangladesh, viewed that relevance of the United Nations depends on how the constituencies of member states make their leaders accountable. “It’s up to how we as citizens make our governments responsible,” she said in response to if the UN is still relevant.

Given the politics with coronavirus vaccines, Farah Kabir pointed out that the UN needs to play a role in ensuring accurate information about vaccines as Covid-19 has exposed the health systems.

She also reiterated that climate change should be included as an issue of human rights. In her deliberation, Nahid Sobhan, a former director general of the UN at the foreign office, said the process is on to incorporate climate change as an issue to be dealt with by the UN Human Rights Council.

Ambassador Nahid Sobhan admitted some failures of the UN in a number of hotspots, alongside its successes. She, however, feels that the UN is still relevant because it is the largest multilateral forum for all nations to talk about issues.

The diplomat regretted that rights of migrants are nowhere especially during the pandemic. “The UN has to step up with its visionary role,” she insisted.

Nomina Halder, NSU professor of Political Science and Sociology, and a member of NHRC, underlined the importance of engaging the UN in vaccine distribution and also increasing education budget to ensure education as a universal right.

Dr Helal Mohiuddin, professor of Political Science and Sociology at NSU, recommended that the independent voice of the Rohingya should be heard and the UN should keep record of the traumatised people from Myanmar.

Dwelling on expectations to the UN, CPS Coordinator Dr M Jashim Uddin said people wondered why the UN Security Council did not make intervention into the Rohingya issue.

Professor Sk Tawfique M Haque, director at NSU’s South Asian Institute of Policy and Governance (SIPG), added that the UN has the responsibility to bring nations together to combat the Covid-19 pandemic.

Bangladesh has so far contributed to the UN missions with almost 180,000 peacekeepers.

Brigadier General Rafiq pointed out that a major challenge in peacekeeping missions is to exercise mandate and a key challenge is to protect civilian lives in volatile spots.

Lieutenant General Sheikh Mamun Khaled, commandant at National Defence College, mentioned that Bangladesh’s commitment to peace has been manifested in its participation in UN peacekeeping missions. Saying that Bangladeshi peacekeepers have become role models, he explained that tolerance, women’s participation and domestic training are key reasons of success.

“Peace is perquisite to development in which Bangladesh has played a leadership role,” said Samia Anjum, director general, the UN, at the Ministry of Foreign Affairs.

Marita Sorheim-Rensvik, special envoy for Women, Peace and Security  (WPS), Norway’s Ministry of Foreign Affairs, appreciated Bangladesh for contribution to peacekeeping especially engagement of women in such missions, apart from the country’s attainment in women empowerment.

Fabrizio Hochschild, under secretary-general and special adviser to the UNSG for the Commemoration of the United Nations' 75th Anniversary, also acknowledged that multilateral systems were not working well. However, referring to feedback from people, he pointed out that majority suggested the multilateral institutions should focus on improving access to basic services.

Dr Toshiya Hoshino, professor at Osaka School of International Public Policy, Osaka University, and former ambassador of Japan to the UN, mentioned that IN Security Council resolutions are political and made by 15 members. “One of the key reform proposals is to expand its membership from 15 to over 20,” he said.

MA Kashem, chair of Board of Trustees of NSU, said in a crisis period, the UN is the only organisation whose sole purpose is to bring countries together. He mentioned that Prime Minister Sheikh Hasina emphasises multilateralism for mitigating challenges of ‘our time’.