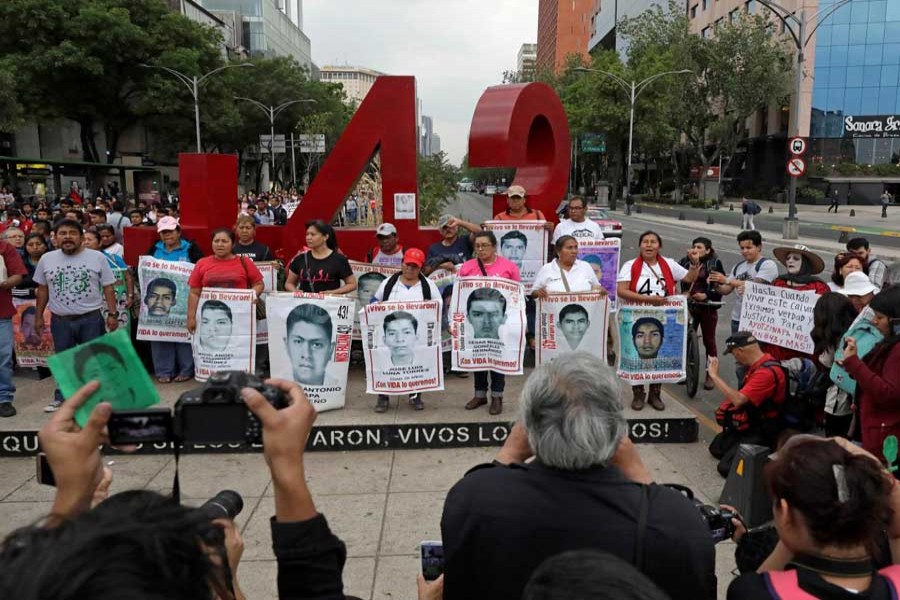 Relatives pose with images of some of the 43 missing Ayotzinapa College Raul Isidro Burgos students in front of a monument of the number 43, during a march to mark the 41st month since their disappearance in the state of Guerrero, in Mexico City, Mexico February 26, 2018. - Reuters

The UN human rights office said in a report on Thursday that Mexican authorities had tortured dozens of people in connection with an investigation into the 2014 disappearance of 43 students, and called for a full inquiry, reports Reuters.

The abduction and suspected massacre of the trainee teachers in the southwestern city of Iguala precipitated one of the worst crises of President Enrique Pena Nieto’s government as criticism swirled around its investigation into the case.

The UN report into the fate of the students, who attended a college in the town of Ayotzinapa, puts the spotlight back on failings by the ruling Institutional Revolutionary Party (PRI) on law and order as it attempts to secure re-election in July.

“The findings of the report point to a pattern of committing, tolerating and covering up torture in the investigation of the Ayotzinapa case,” Zeid Ra’ad al-Hussein, the UN High Commissioner for Human Rights, said in the report.

Murders hit a record high in Mexico last year, and discontent over lawlessness and corruption has hammered support for the PRI, whose candidate is running third in most polls for the July presidential election, well behind the favourite.

Mexico’s mission in Geneva said the ambassador was not immediately available to comment on the UN report, entitled “Double injustice - human rights violations in the investigation of the Ayotzinapa case”.

An initial government investigation found that the students, who were on five buses, were abducted by corrupt police who handed them over to members of a drug cartel.

The gang members then killed them, incinerated their bodies at a trash dump and threw the ashes into a river, it concluded.

But that account has been widely questioned by local and international human rights experts. Only the remains of one of the students has been definitively identified.

Zeid’s office, which examined information related to 63 out of 129 people detained in connected with the case, said it had documented arbitrary detention and torture based on interviews, judicial files and medical records.

It had information on the possible torture of 51 people and “solid grounds to conclude that at least 34 of these individuals were tortured”, including one woman. But it stopped short of attributing blame for the murders.

“Ayotzinapa is a test case of the Mexican authorities’ willingness and ability to tackle serious human rights violations,” Zeid said. “I urge the Mexican authorities to ensure that the search for truth and justice regarding Ayotzinapa continues, and also that those responsible for torture and other human rights violations committed during the investigation are held accountable.”

The UN report calls for any evidence in the Ayotzinapa case for which there are credible indications that it was obtained under torture to be excluded or invalidated.

A team of international experts said in September 2015 that Mexico’s official account of the Ayotzinapa case did not add up, citing deep flaws in the inquiry. The experts suggested the missing bus may have been carrying a shipment of cash or drugs.

Mexican actor Gael Garcia Bernal told the UN Human Rights Council in Geneva on Wednesday that crimes against humanity had been committed in Mexico “in the name of security.”

Mexico said on Monday it had arrested a suspected drug gang member regarded as a key figure in the kidnapping.