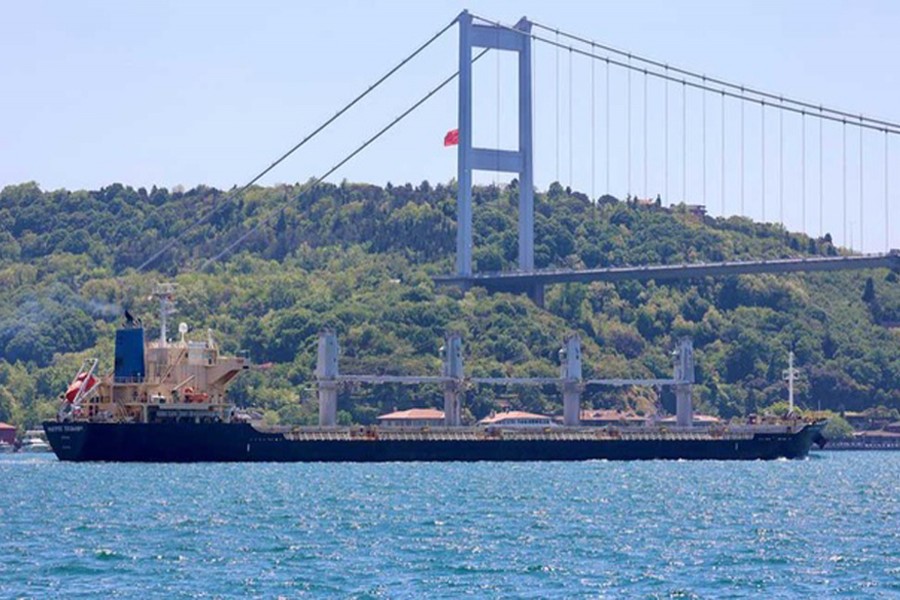 Russia has sent its ally Syria an estimated 100,000 tonnes of wheat stolen from Ukraine since invading the country, the Ukrainian embassy in Beirut said, describing the shipments as "criminal activity".

In a statement to Reuters, the embassy said the shipments included one aboard the Matros Pozynich, a Russian-flagged vessel which docked at Syria's main sea port Latakia in late May.

Data from Refinitiv showed the Matros Pozynich loading wheat at the port of Sevastopol in Crimea - annexed by Russia from Ukraine in 2014 - with a May 19 departure date and the discharge location given as Syria.

Ukraine's embassy in Lebanon, citing Ukrainian law enforcement, alleged the grain aboard the Matros Pozynich had been "stolen" from Ukrainian storage facilities in areas newly occupied by Russian forces.

Russia's defence ministry and the Syrian information ministry did not immediately reply to Reuters' requests for comment. Russia has previously denied allegations of stealing wheat from Ukraine.

"The wheat is stolen from a facility that combines wheat from three Ukrainian regions into one batch," the embassy said.

"This is criminal activity," it said, adding that it had tried to reach out to the Syrian authorities but had never received a response.

The embassy said more than 100,000 tonnes of "plundered" Ukrainian wheat had arrived in Syria over the last three months. With international wheat prices above $400 a tonne, such a volume would be worth more than $40 million.

Reuters was not able to independently verify the Ukrainian allegations.

Syria's information ministry did not immediately respond to emailed questions from Reuters seeking comment on the accusation the country had received 100,000 tonnes of stolen Ukrainian wheat, and that the deliveries amounted to criminal activity.

Neither did it respond to a question on whether Syria had failed to answer Ukrainian correspondence on the issue.

The Syrian agriculture ministry and officials at the Latakia port did not immediately respond to requests for comment.

Russia has been an important source of wheat imports for Syria since the start of its civil war in 2011, both as commercial imports and humanitarian aid. Moscow has also provided President Bashar al-Assad with vital military support during the conflict, sending its air force to Syria in 2015.

Russia pledged to supply Syria with one million tonnes of wheat under a bilateral deal in 2021, according to Interfax. Syrian grain imports have included shipments from Crimea.

The Matros Pozynich had initially set its destination for Beirut, Lebanon, but turned its transponder off on May 25 off the Lebanese coast, according to Refinitiv ship tracking data.

On Wednesday, the ship turned its transponder back on and could be tracked sailing west, away from the Syrian coast, according to movements shown by MarineTraffic.com.

Russia invaded Ukraine in February, launching what it called a "special operation" to disarm and "denazify" the country. Ukraine and its Western allies call this a baseless pretext for a war to seize territory.

In a statement last month, Ukraine's agriculture ministry said the theft of 500,000 tonnes of wheat had already been recorded from occupied regions of the country.

The grain was being sent either to Russia, primarily from the Kharkiv, Donetsk and Luhansk regions, or to Crimea from the Zaporizhia and Kherson regions, the ministry added.

In April, the Kremlin denied allegations of stolen wheat, saying it did not know where the information came from.

Russian Deputy Foreign Minister Andrei Rudenko was quoted as saying by the Interfax news agency on May 25 that Russia strongly denied Western media reports of stealing grain from Ukraine: "We are not stealing anything from anyone."

However, the Russian-controlled Ukrainian region of Kherson began exporting grain to Russia, the TASS news agency reported, citing Kirill Stremousov, deputy head of the pro-Russian military-civilian administration, earlier this week. He did not say how payment had been organised.

Last month, Ukraine thanked Egypt, one of the world's largest wheat importers, for turning away a Russian ship loaded with grain which Kyiv also said had been stolen from Ukraine.