Ukraine will not give up a single piece of land, says Zelensky 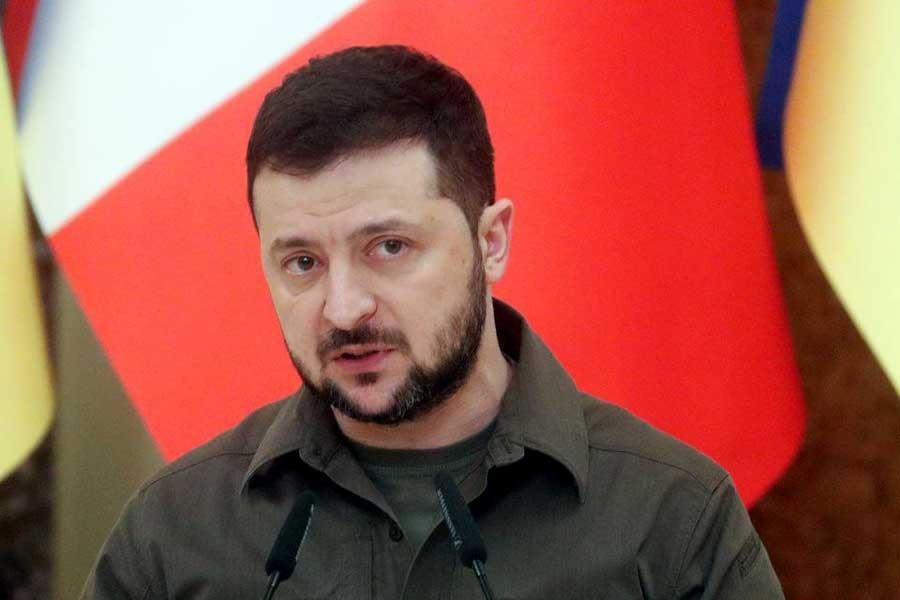 Ukrainian President Volodymyr Zelensky said on Monday that Kyiv would defeat Russia's invasionand not give up a single piece of land, as he marked victory over Nazi Germany in World War Two.

Zelensky, in a video address, commemorated the deaths of more than eight million Ukrainians in World War Two and said that Kyiv would not allow Moscow to appropriate the victory over Nazism for itself, reports Reuters.

Russia marked the Soviet victory on Monday with a vast military parade on Red Square as Kremlin leader Vladimir Putin watched on. Ukraine and Russia fought together as part of the Soviet Union in World War Two.

The Russia-Ukraine war, which started on February 24, has killed thousands of people and displaced millions, reducing the Sea of Azov port city of Mariupol to ruins.

"On the Day of Victory over Nazism, we are fighting for a new victory. The road to it is difficult, but we have no doubt that we will win," Zelensky said.

The Ukrainian leader, in plain army garb with his shirt sleeves rolled-up, invoked more than 30 years of post-Soviet independence, and said Russia had failed to learn the lessons of World War Two.

"There are no shackles that can bind our free spirit. There is no occupier who can take root in our free land. There is no invader who can rule over our free people. Sooner or later we win," he said.

His video showed Zelensky striding past tank traps down the empty street of Khreshchatyk - the main thoroughfare of central Kyiv that was destroyed by retreating Soviet forces in 1941 and rebuilt in Stalinist style.

Zelensky criticised Putin directly but he did not name him.

"The one who is repeating the horrific crimes of Hitler's regime today, following Nazi philosophy, copying everything they did. He is doomed," he said.

Ukraine marks Victory Day on May 9, but as it has turned westward to Europe since 2014, it has also instituted a Day of Remembrance and Reconciliation on May 8, the day France, Britain and the United States mark as "Victory in Europe Day".

Ukraine is not holding any public events for May 9 for fear of shelling. Some places have imposed a hard curfew from Sunday evening to Tuesday morning.

The streets were eerily deserted in the southeastern city of Zaporizhzhia not far from the front lines where residents respected an all-day curfew.