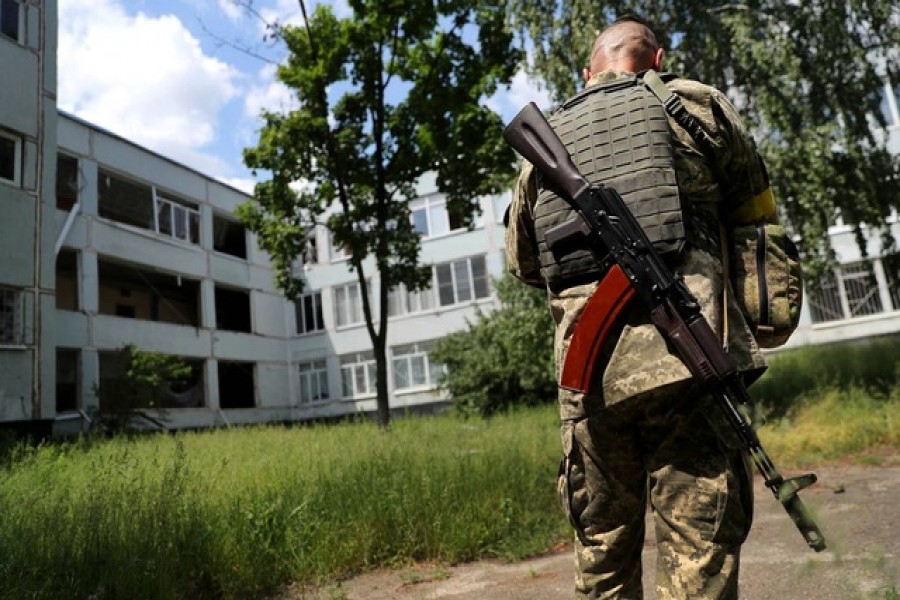 A member of the Ukrainian Territorial Defense Forces prepares to use a drone at a damaged school after a missile strike, amid Russia's attack on Ukraine, at a residential area in Kharkiv, Ukraine Jun 2, 2022. REUTERS

After 100 days of war, Ukraine is fighting for time, trying to hold out against overwhelming Russian fire on its eastern front long enough for Western weapons to arrive and give it a badly needed edge, Reuters reports.

With casualties mounting and some delays in Western capitals with deliveries, Ukrainian officials fear the relief may not come quickly enough.

A White House pledge this week of $700 million of weapons including advanced rocket systems have been greeted with a touch of scepticism by some of those watching their homes pummelled and cities overrun.

"It's already running late," said Serhiy Gaidai, the governor of Ukraine's eastern Luhansk region whose home town Sievierodonetsk has been partially destroyed during a Russian advance in recent days.

"Our Western partners are helping us, but the quantity of weapons and ammunition that they are providing are not enough," he said in an interview.

Thousands have been killed and more than 6 million people forced to flee the country since Russia launched what Ukraine says was an unprovoked invasion on Feb 24.

Russia says it is engaged in a "special military operation" to disarm Ukraine and rid it of ultra-nationalists the Kremlin says threaten Russian security. In Moscow, President Vladimir Putin appears intent on conveying the impression of business as usual, despite damaging international sanctions.

With one-fifth of Ukraine under occupation, President Volodymyr Zelensky on Thursday told Western officials in Bratislava that the war faced an "inflection point" depending on whether the West could provide the weapons to subvert the huge advantage in equipment and troops Russia has in the east.

Some feel the West has already missed its best chance.

"My sense is that the West made a big mistake. Six weeks ago, when the Russians were in retreat ... That's when the Americans should have given Ukrainians HIMARS," said Jamie Shea, a former senior NATO official now at the Friends of Europe think-tank in Brussels, referring to the advanced rocket systems being promised by the United States.

After over-stretching their supply lines in the early weeks of the war, the Russians were forced to withdraw from positions around the capital Kyiv and other northern regions.

But in recent weeks they have put Ukraine on the back foot in eastern Ukraine by concentrating overwhelming fire power on a relatively small front.

Russia is advancing slowly, just 500-1,000 meters per day compared to the tens of kilometres envisaged by their military doctrine when using their current tactics, a Western defence official said.

The focus on artillery is in part determined by the weakened state of Russian ground forces, whose combat effectiveness is around just 50% of full capacity, the Western defence official said, estimating Moscow had lost over 40,000 troops to death or injury.

But the tactic is also inflicting unrelenting damage to the Ukrainian forces on the front line, with the government estimating losses of 100 troops a day and 450-500 wounded.

The intensity of fire is preventing Ukrainian forces from being rotated, deepening fatigue levels.

While Ukraine is impressing with very smart tactics and strategies and organization, "no one can deny that the Ukrainians have been taking hit after hit" said Joerg Forbrig, at the German Marshall Fund in Berlin.

"Russia has a lot more to pour into this war than the Ukrainians have," he said.

Two factors are likely to determine the success of the Western relief effort: speed and quantity, according to military analysts.

"We received about 100 howitzers from the United States and almost all of them are in Ukraine, but the problem is that we need at least five times more such weapons in order to at least ensure a balance of power," in the east, said Kyiv-based Serhiy Zgurets, head of Defense Express policy consultancy.

It can take up to four weeks for weapons to enter service taking into account delivery and training time, potentially giving Russia a window to pre-emptively ramp up its operations.

Advanced US rocket systems with a range of up to 80 km (50 miles) - around double the range of existing artillery - could prove a major advantage to Ukraine, greatly reducing the exposure of artillery crews to incoming fire and increasing the speed and accuracy at which Russian positions can be taken out.

The weapons could also allow Ukraine to strike at supply lines deep behind enemy lines. Washington agreed to supply the HIMARS after receiving assurances from Kyiv that it would not use them to hit targets inside Russian territory.

Russia said Washington is adding "fuel to the fire".

"Provided that Ukraine consistently receive the types of weapons that it has requested ... and that it will be expanded and increased ... this could potentially make it possible to halt Russia on all sectors of the front and will create conditions for counter-attacks" by August or September, said Oleksandr Musiyenko of Ukraine's Center for Military and Legal Studies.