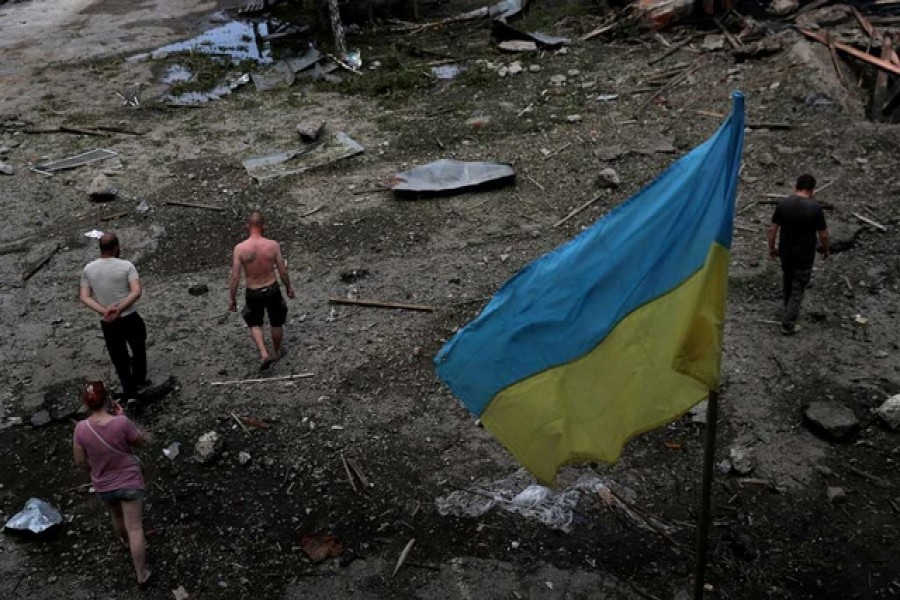 Workers inspect their workplace, a damaged wood warehouse, after a strike, amid Russia's attack on Ukraine, in the outskirt of Kharkiv, Ukraine Jun 3, 2022. REUTERS/Ivan Alvarado

Kyiv said on Saturday Moscow had reinforced its troops around Sievierodonetsk and attempted to cut off Ukraine's access to the industrial city, the focus of a Russian offensive to take the eastern Donbas region, news agency Reuters reported.

Serhiy Gaidai, governor of Luhansk province, said Russian forces were blowing up bridges across the Siverskyi Donets river to prevent Ukraine from bringing in military reinforcements and delivering aid to civilians in Sievierodonetsk.

"The Russian army, as we understand, is throwing all its efforts, all its reserves in that (Sievierodonetsk) direction," Gaidai said in a live TV broadcast on Saturday.

"Russians are blowing up bridges, so we could not bring in reinforcements to our boys in Sievierodonetsk," he said.

Since being driven back from the capital Kyiv, Russia has launched a massive assault in Luhansk and Donetsk, two provinces that make up the eastern Donbas region.

For both sides, the fighting in the east in recent weeks has been one of the deadliest phases of the war, with Ukraine saying it is losing 60 to 100 soldiers every day.

Ukraine's military said on Saturday Russia had used artillery to conduct "assault operations" in Sievierodonetsk, but Russian forces retreated and Ukrainian troops are holding positions inside the city, around 145 kilometres (90 miles) from the Russian border.

Russian soldiers also attempted to advance towards Lysychansk, across the Siverskyi Donets river from Sievierodonetsk, but were stopped, Ukraine's military general staff said.

Reuters reached Sievierodonetsk on Thursday and was able to verify that Ukrainians still held part of the city.

Tens of thousands have died, millions have been uprooted from their homes and the global economy was disrupted in a war that marked its 100th day on Friday.

Ukrainian officials are counting on advanced missile systems recently pledged by the United States and Britain to swing the war in their favour, and Ukrainian troops have already begun training on them.

Moscow has said the Western weapons will pour "fuel on the fire," but will not change the course of what it calls a "special military operation" to disarm Ukraine and rid it of dangerous nationalists.

The war has had a devastating impact on the global economy, especially for poor food-importing countries.

Ukraine is one of the world's leading sources of grain and cooking oil, but those supplies were largely cut off by Russia's closure of its Black Sea ports, with more than 20 million tonnes of grain stuck in silos.

Kyiv and its allies blame Moscow for blockading the ports.

Moscow says sanctions are also hitting its own grain and fertiliser exports, aggravating the shortages.

UN Secretary-General Antonio Guterres has this week tried to broker what he calls a "package deal" to resume both Ukrainian food exports and Russian food and fertiliser exports.