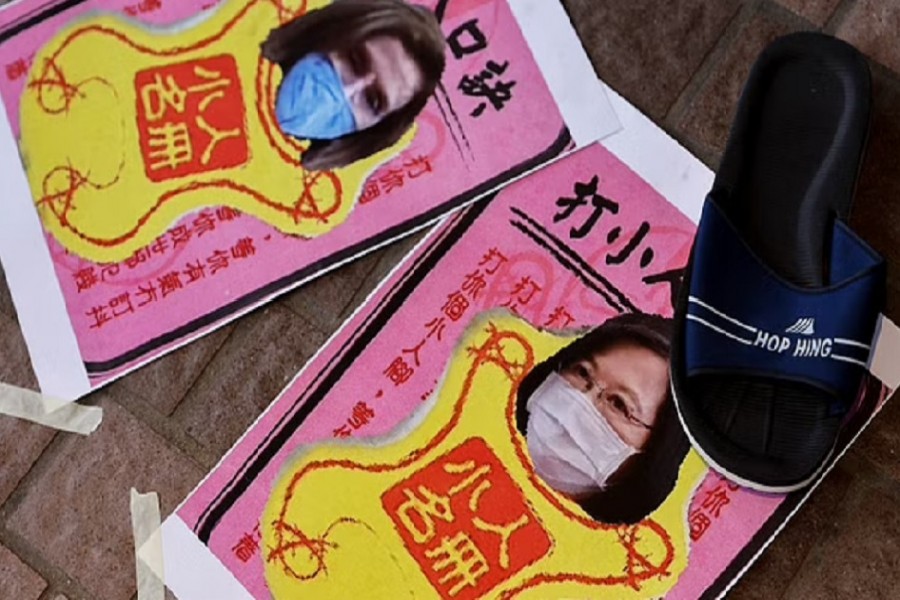 A shoe is placed next to images of US House of Representatives Speaker Pelosi and Taiwan President Ing-wen, during a protest, in Hong Kong. REUTERS

A furious China has extended its largest-ever exercises around the self-ruled island it claims as its own following Pelosi's visit, the highest-level trip to the island by an American official in decades.

"I instructed officials to summon the Chinese Ambassador to explain his country's actions. We have seen increasingly aggressive behaviour and rhetoric from Beijing in recent months, which threaten peace and stability in the region," Truss said in a statement.

"The United Kingdom urges China to resolve any differences by peaceful means, without the threat or use of force or coercion."

Truss is currently leading the race to become Britain's next prime minister, according to opinion polls.

A spokesperson for China's foreign ministry said on Thursday that China is "strongly dissatisfied" with and "resolutely opposes" Truss' comments and has lodged a diplomatic complaint with Britain, reports Reuters.

"If the collusion between inside and outside and the splitting of the territory takes place in Britain's Scotland, will the British side be able to remain calm and restrained and let the status quo deteriorate?," foreign ministry spokesman Wang Wenbin said at a regular briefing.

"The Taiwan issue is purely an internal affair of China, and the reunification of the two sides of the Taiwan Strait is a historical trend that will certainly be achieved in the course of the great rejuvenation of the Chinese nation," Wang added.