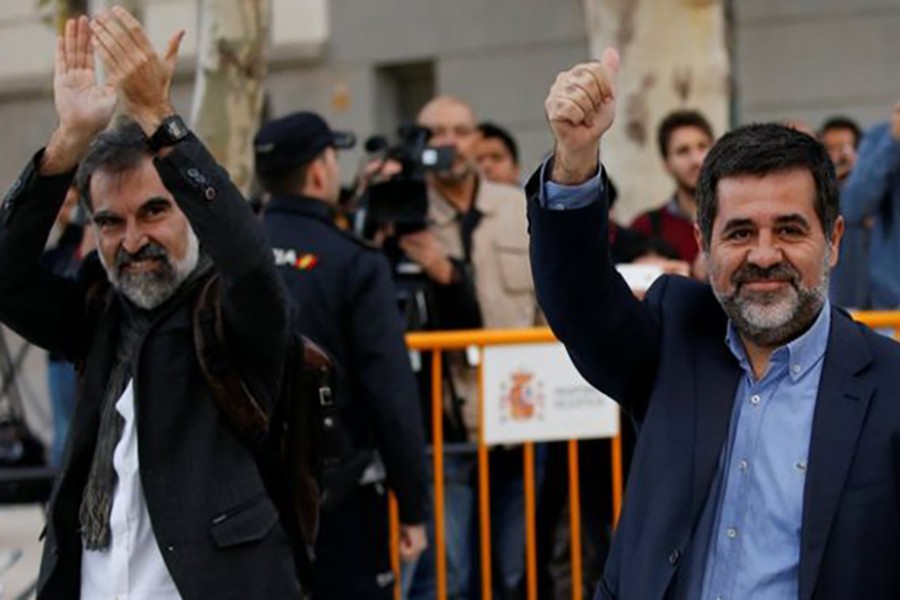 A Spanish judge has jailed two key members of the Catalan independence movement.

Jordi Sánchez and Jordi Cuixart, who lead prominent separatist groups, are being held without bail while they are under investigation for sedition.

The men were leading figures in the 1 October independence vote, which the Madrid government regards as illegal.

Their detention led to protests overnight, with more expected across Catalonia on Tuesday.

Mr Sánchez, who heads the Catalan National Assembly (ANC), a pro-independence organisation, and Mr Cuixart, leader of Omnium Cultural, appeared before the High Court in Madrid on Monday.

They are being investigated over a protest on 20 September in which a crowd blocked Civil Guard officers inside a building in Barcelona, Catalonia's regional capital.

Following the referendum, Catalan leader Carles Puigdemont signed a declaration of independence, but halted its implementation to allow negotiations.

He has called for talks to take place over the next two months.

However, the Spanish government has warned that Catalonia must revoke the declaration or face direct rule from Madrid.

Mr Puigdemont has also angered Madrid by refusing to clarify whether or not he declared independence last week.

Mr Puigdemont, who has been given until Thursday to clarify his position, hit out at the government on Twitter following news of Mr Sánchez and Mr Cuixart's detention.

In a video recorded before his court appearance and released on his Twitter account after his detention, Mr Cuixart instructs separatists to "never lose hope because the people of Catalonia have earned their future".

His force, the Mossos d'Esquadra, is accused of failing to help Spain's Guardia Civil police tackle thousands of pro-independence protesters in Barcelona during the run-up to the referendum.

Prosecutors had called for him to be held in detention.