Trump to meet Modi, Imran for talks focusing on Kashmir 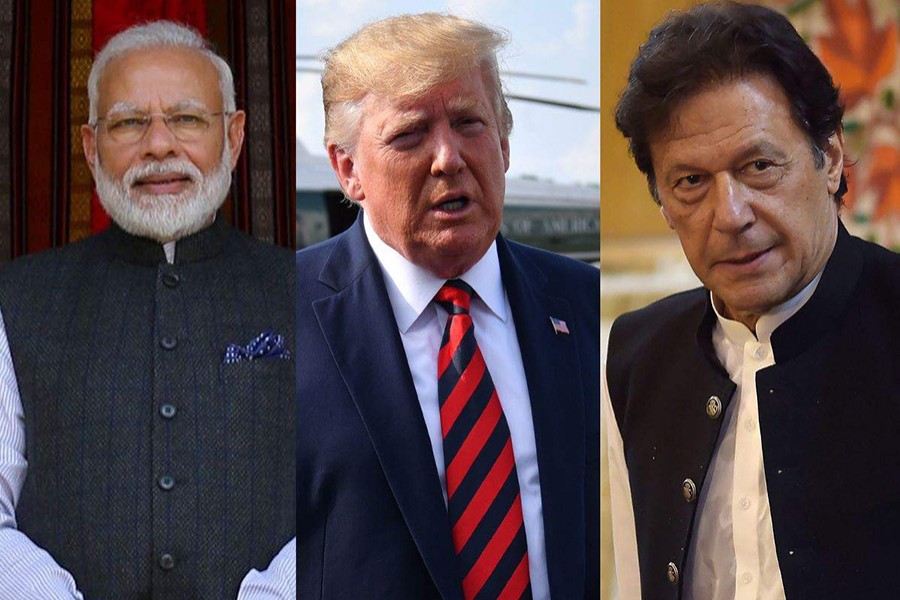 US President Donald Trump has said that he will meet both Indian and Pakistani leaders in the next few days while claiming that “a lot of progress is being made” in defusing tensions between South Asia’s two nuclear-armed neighbours, reports Dawn.

“I’ll see Prime Minister Modi and I will — we’ll — be meeting with (prime ministers of) India and Pakistan,” said Trump, adding: “And I think a lot of progress is being made there, a lot of progress.”

Trump made these remarks on Monday afternoon (US local time) while responding to a question about a joint rally Modi and he are scheduled to address in Houston, Texas on September 22.

Although the Indian community in the US is describing this rally as a “major diplomatic win” for India, Pre­sident Trump’s remarks show that the US leader is still interested in playing a mediatory role between South Asia’s two traditional rivals.

Trump’s announcement that he will be meeting both Indian and Pakistani leaders in the next few days confirms media speculation about an Imran-Trump meeting during the UN General Assembly (UNGA) in New York next week.

Both Pakistani and Indian prime ministers are scheduled to address the UN general Assembly on September 27 and will be in New York next week.

President Trump’s UNGA schedule indicates that he could meet Prime Minister Khan on the sidelines of the general assembly while he is already scheduled to meet Modi in Houston.

Reports in the Indian media, however, suggest that Modi would prefer a proper meeting in New York or Washington, to an informal discussion during the Houston rally. This means that Trump will have two meetings with Modi within a week for talks on an issue – Kashmir – that Washington fears could lead to yet another war between India and Pakistan.

The other part of Trump’s statement – “lot of progress is being made” – indicates that the United States has stayed engaged with the two neighbours despite New Delhi’s often-stated position that it does not welcome international mediation in its disputes with Pakistan.

This follows another Trump statement last week that he’s willing to ‘help’ India and Pakistan resolve the Kashmir dispute.

The US president first offered to mediate between India and Pakistan over the Kashmir dispute on July 22 at a joint White House news conference with Prime Minister Khan. Since then, he has repeated this offer at least twice, even though Modi rejected the idea in his presence during a G7 meeting in France last month.

Tensions between India and Pakistan reached a feverish pitch on August 5, when New Delhi unilaterally annexed Kashmir, revoking a constitutional guarantee that gave a special status to the disputed territory. Islamabad condemned the move as further strengthening of an illegal occupation, downgraded diplomatic ties and severed trade links with India.

Besides the US President, Prime Minister Khan is also expected to meet several other world leaders as part of his strategy to persuade the international community to pay more attention to India’s actions in Kashmir.

No time to waste in empowering women: UN chief