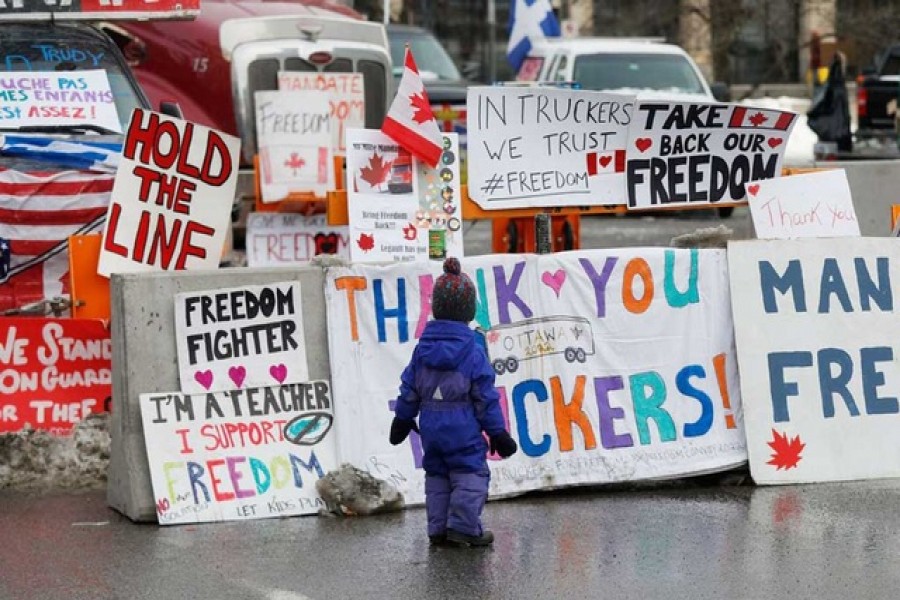 Truckers opposed to coronavirus mandates risk hurting the auto sector and agriculture as they block US-Canada border crossings, the White House said on Wednesday as Ford halted some output and Ottawa urged an end to the 13-day-long protests, reports Reuters.

Many pandemic-weary Western countries will soon mark two years of restrictions as copycat protests spread to Australia, New Zealand and France now the highly infectious omicron variant begins to ease in some places.

Horn-blaring protests have been causing gridlock in the capital Ottawa since late January and from Monday night, truckers shut inbound Canada traffic at the Ambassador Bridge, a supply route for Detroit's carmakers and agricultural products.

Production has been affected at Ford Motor Co and Chrysler-maker Stellantis.

Another border crossing, in Alberta province, has been closed in both directions since late on Tuesday.

Starting as a "Freedom Convoy" occupying downtown Ottawa opposing a vaccinate-or-quarantine mandate for cross-border truckers mirrored by the US government, protesters have also aired grievances about a carbon tax and other legislation.

"I think it's important for everyone in Canada and the United States to understand what the impact of this blockage is - potential impact - on workers, on the supply chain, and that is where we're most focused," White House spokesperson Jen Psaki said on Wednesday.

"We're also looking to track potential disruptions to US agricultural exports from Michigan into Canada."

Washington is working with authorities across the border to reroute traffic to the Blue Water Bridge, which links Port Huron in Michigan with Sarnia in Ontario, amid worries protests could turn violent, she told reporters.

"If there were to be prolonged blockages at key entry points into Canada that could start to have a measurable impact on economic activity," he said.

"We've already got a strained global supply chain. We don't need this."

The bridge closure has already caused a shortage of parts at carmaker Stellantis' assembly plant in Windsor, Ontario, where it builds Chrysler vehicles.

The company said it had to end shifts early on Tuesday, but the plant was able to resume production on Wednesday morning.

Ford suspended engine production in Windsor while its Oakville factory near Toronto is operating with a reduced schedule, as it warned the Ambassador bridge closure "could have widespread impact on all automakers in the US and Canada."

The auto industry is also struggling with a lack of semi-conductor chips worldwide.

Protesters say they are peaceful, but some Ottawa residents have said they were attacked and harassed. In Toronto, streets were being blocked.

"We continue to know that science and public health rules and guidance is the best way to this pandemic is the way we're going to get to the other side," said Prime Minister Justin Trudeau.

The issue has caused a sharp split between the ruling Liberals and the opposition Conservatives, many of whom have expressed open support for the protesters in Ottawa and accuse Trudeau of using the mandates issue for political purposes.

In the United States, prosecutors in Missouri and Texas will probe crowd funding service GoFundMe over the decision to take down a page for a campaign in support of the drivers after some Republicans vowed to investigate.

Ottawa residents criticized police for their initially permissive attitude toward the blockade, but authorities began trying to take back control Sunday night with the seizure of thousands of liters of fuel and the removal of an oil tanker truck.

Police have asked for reinforcements - both officers and people with legal expertise in insurance and licensing - suggesting intentions to pursue enforcement through commercial vehicle licenses.

But as the authorities attempt to quell demonstrations in one area, they pop up elsewhere.

"Even as we have made some headway in Ottawa, we've seen an illegal blockade emerge in Windsor," said Public Safety Minister Marco Mendicino.