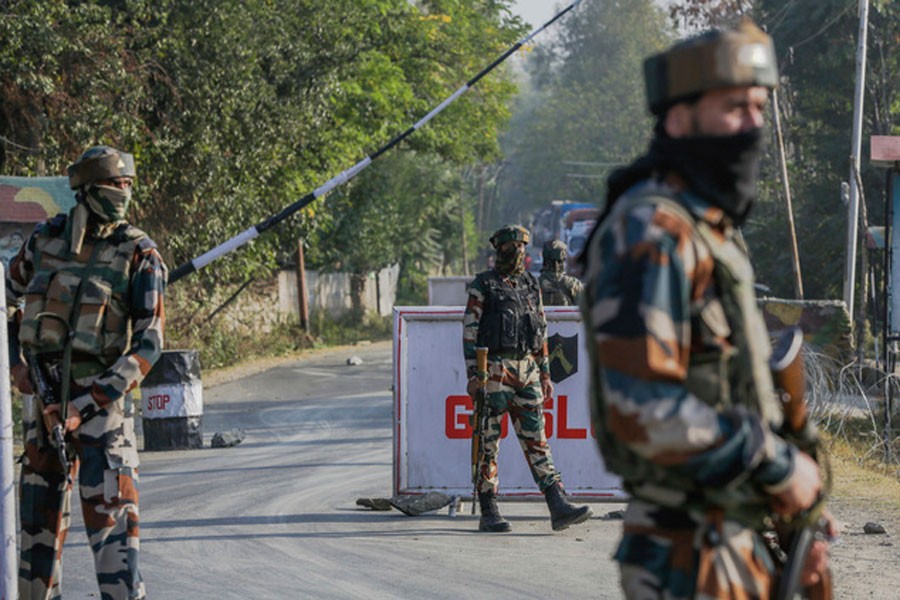 Indian army soldiers guard outside the base camp which was attacked by suspected militants at Baramulla, northwest of Srinagar, Indian controlled Kashmir, Monday, Oct. 3, 2016. (AP photo)

The gunmen believed to be suicide attackers indiscriminately used gunfire, while making their entry inside the camp near Indian air force station and airport in Srinagar city, the summer capital of Indian-controlled Kashmir.

"Three BSF personnel were wounded in today's attack and one body possibly of a militant is lying near the gate," the region's police chief Shesh Paul Vaid told media. "There is heavy gunfire underway and top officials of police are on the spot."

According to police officials, three to four militants are suspected to have entered the camp using heavy gunfire.

"Militants are said to have sneaked inside the camp premises at around 3:45 a.m (local time) today," a police official said.

Authorities have sealed the routes leading to Srinagar airport and operations at the airport have been suspended.

"All morning flights have been suspended," a senior police official said.

Media reports said the army had used helicopters in the area to take on militants.

A guerrilla war is going on between militants and Indian troops stationed in the region since 1989.

Kashmir, the Himalayan region divided between India and Pakistan is claimed by both in full. Since their independence from Britain, the two countries have fought three wars, two exclusively over Kashmir.