Syria govt faces US-backed Kurds after collapse of IS 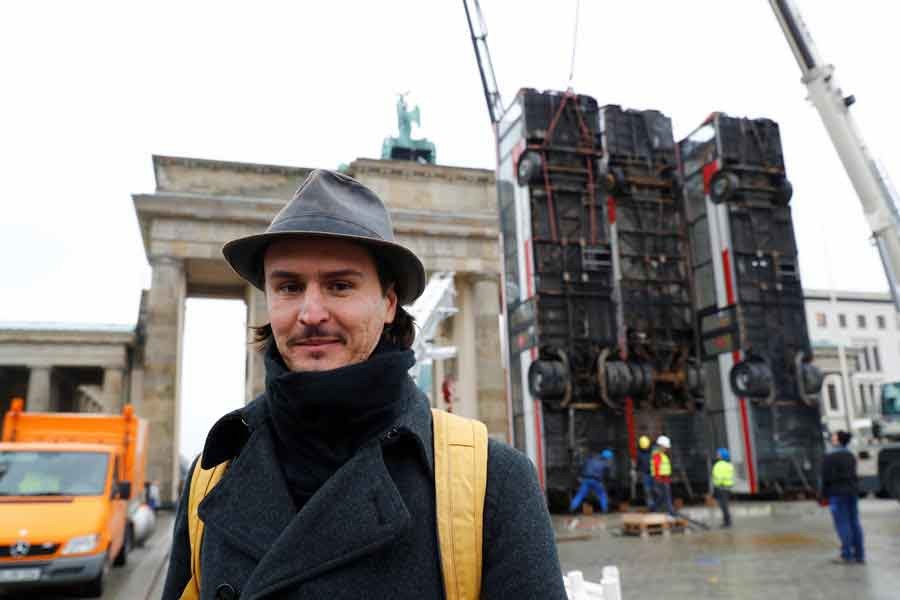 BERLIN: German-Syrian artist Manaf Halbouni poses in front of his installation "Monument" in front of the Brandenburg Gate in Berlin on Friday. — Reuters

With the fall of the Islamic State group's last significant stronghold in Syria, Iranian and Russian-backed Syrian troops now turn to face off with their main rival, the US-backed forces holding large oil fields and strategic territory in the country's north and east, reports AP.

The complicated map puts US and Iranian forces at close proximity, standing just across the Euphrates River from each other, amid multiple hotspots that could turn violent, particularly in the absence of a clear American policy.

There are already signs.

Iran threatened last week that Syrian troops will advance toward Raqqa, the former IS capital, which fell to the US-backed Syrian Democratic Forces in October, raising the potential for a clash there. The Kurdish-led SDF also controls some of Syria's largest oil fields, in the oil-rich eastern Deir el-Zour province, an essential resource that the Syrian government also says it will take back.

The SDF also faces restlessness in an Arab-majority town it liberated last year, a possible sign of things to come in other areas that the Kurdish-dominated forces control in their self-rule area in northern Syria, now about 25 per cent of the country's territory.

The question now is whether the United States is willing to confront the troops of Syrian President Bashar Assad and Iranian-backed militiamen. The Kurds are seeking a clear American commitment to help them defend their gains. American officials have said little of their plans and objectives in Syria beyond general statements about continuing to deny IS safe havens and continuing to train and equip allies.

During a meeting this week with Ali Akbar Velayati, the adviser of Iran's supreme leader, Assad said his war was against terrorism and against plans to partition Syria, a direct reference to Kurdish aspirations for a recognized autonomous zone in the north. He repeated that his government plans to regain control of all of Syria.

Government victories "have foiled all partition plans and the goals of terrorism and the countries sponsoring it," Assad said.

With its collapse in Boukamal on Thursday, the Islamic State group has no major territory in Syria or Iraq. Its militants are believed to have pulled back into the desert, east and west of the Euphrates River. The group has a small presence near the capital, Damascus.