Suu Kyi shrug off criticism for silence over Rakhine situation 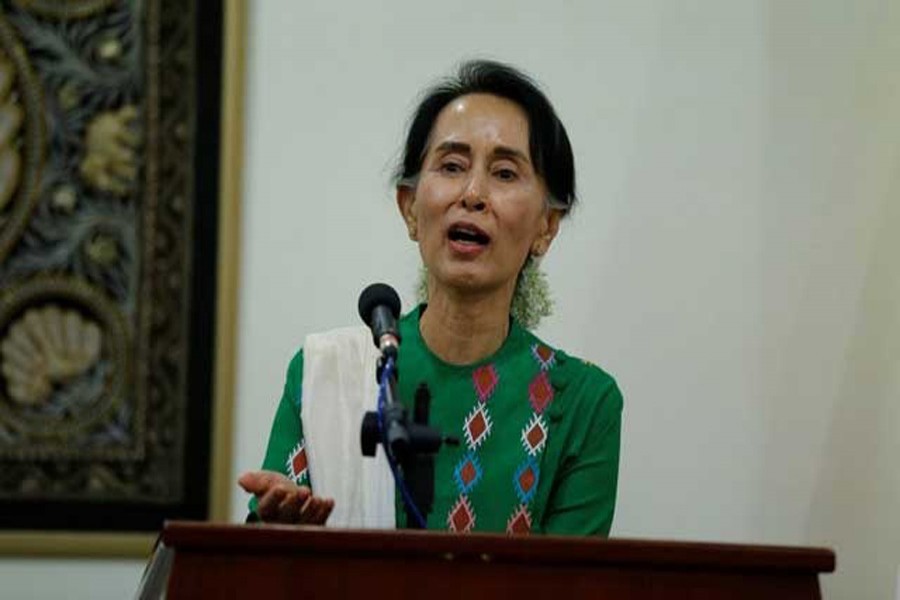 Aung San Suu Kyi talks to media during a news conference after she met with US Secretary of State Rex Tillerson at Naypyitaw, Myanmar November 15, 2015. Reuters

Myanmar's de facto leader Aung San Suu Kyi has wondered why people say she has been silent over the brutal army crackdown on the Rohingya Muslims in Rakhine State.
"I don’t know why people say that I’ve been silent. I haven’t been silent," she said in reply to a reporter's query during a joint press conference with US Secretary of State Rex Tillerson at Naypyidaw on Wednesday, according to a State Department transcript of the conference.
"Actually, we’ve been sending out a lot of statements from my office, and I’ve also made statements of my own," she said as she is facing the allegation of being silent on the issue, for which she has lost several honours she had received for her contribution to reviving democracy in Myanmar.
She said her comments on the issue were not 'interesting enough' or 'exciting' but 'meant to be accurate'.
"And it’s aimed at creating more harmony and a better future for everybody, not for setting people against each other," Suu Kyi said.
"We mustn’t forget that there are many different communities in the Rakhine, and if they are to live together in peace and harmony in the long-term, we can’t set them against each other now.
"We cannot make the kind of statements that drive them further apart. This is the reason why we are very careful about what is said," she added.

According to bdnews24.com, Myanmar state counsellor said her government "always kept the public informed of what has been going on and what we are trying to do to make the situation better".
The United Nations has called the violence in Myanmar a "textbook example of ethnic cleansing", and the Nobel Peace Prize laureate Suu Kyi has been widely criticised for failing to take action to stop it.
But, she had to tread carefully in order not to inflame things, one of her aides said earlier, adding Myanmar's transition to democracy was in a "perilous position".
In her first address on Sept 19 since the latest exodus of Rohingyas started following an army operation on Aug 25, she said Myanmar was prepared to take back its verified nationals from Bangladesh.
About the allegation of atrocities, she said action would be taken against "all people regardless of their religion, race or political position who go against the laws of the land and who violate human rights as accepted by our international community".
“We have to make sure these allegations are based on the solid evidence before we take action,” she had added.
But her statement failed to stop the criticism as the exodus of refugees continued along with violence.
More than 600,000 Rohingyas have crossed the border into Bangladesh since the army operation began. Bangladesh had already sheltered 400,000 refugees by the time.
Even after the victory of Suu Kyi's party in the 2015 election, the army controls most of the government in Myanmar, including security and defence authorities.
Many, including Bangladesh Prime Minister Sheikh Hasina, have accepted Suu Kyi's way of handling the Rakhine situation.
While passing a motion in parliament to mount diplomatic pressure on Myanmar to take back the Rohingyas in September, Hasina, the daughter of the Father of the Nation Bangabandhu Sheikh Mujibur Rahman, urged all to consider the real power of Suu Kyi, the daughter of the Father of the Nation of modern-day Myanmar.
“How will she exercise her power? The military has more representatives even in parliament there (than her party has). Their words are final in policymaking,” Hasina had explained.
But recently, Irish musician and activist Bob Geldof called Suu Kyi "a handmaiden to genocide" as he returned his Freedom of the City of Dublin award in protest over his fellow recipient's response to the repression of Rohingya Muslims.
Earlier, Britain’s second-largest trade union Unison suspended an award given to Suu Kyi during her time as a political prisoner.
She has also been stripped of the Freedom of Oxford honour over the Rohingya issue.