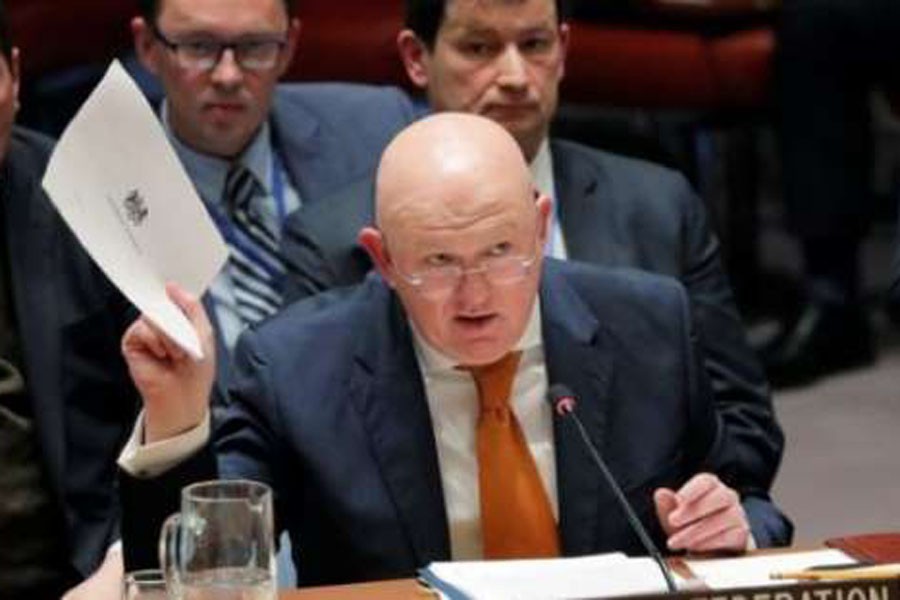 Moscow's UN ambassador Vasily Nebenzia: "You are playing with fire and you will be sorry". BBC/File Photo

Russia has accused the UK of inventing a "fake story" and "playing with fire" over the Salisbury spy poisoning.

At a UN Security Council meeting, Moscow's UN ambassador Vasily Nebenzia said Britain's main goal had been "to discredit and even delegitimise" Russia with "unsubstantiated accusations".

The UK says Russia is behind the attack but Moscow denies responsibility.

She likened Moscow's requests to take part in the investigation to an arsonist investigating his own fire.

Russian former spy Sergei Skripal and his daughter Yulia were found unconscious in Salisbury on 4 March.

Ms Skripal, 33, is recovering in hospital and has released a statement saying her "strength is growing daily".

Meanwhile it has emerged that two guinea pigs were found dead at Mr Skripal's home, alongside a cat in poor health, which vets decided to put down.

Moscow called the special meeting of the Security Council in New York to discuss the attack, saying Britain had "legitimate questions" to answer.

Mr Nebenzia said the accusations were "horrific and unsubstantiated", and claimed the UK was waging a "propaganda war" against Russia.

He said Novichok - the group of nerve agent used in the poisoning - is "not copyrighted by Russia, in spite of the obviously Russian name" and has been developed in many countries.

"It's some sort of theatre of the absurd. Couldn't you come up with a better fake story?" he asked.

In his statement to the 15-member council, Mr Nebenzia questioned why Russia would eliminate someone using a "dangerous and highly public" method.

He contrasted the use of a chemical with the "hundreds of clever ways of killing someone" shown in British series Midsomer Murders, reports BBC.

Responding, the British Ambassador to the UN, Karen Pierce, accused Russia of seeking to "undermine the international institutions that have kept us safe since the Second World War".

She said Russia came under suspicion for several reasons, saying it had "a record of conducting state-sponsored assassinations" and that it "views defectors as suitable targets for assassination".

Ms Pierce told delegates that Russia's request to visit Ms Skripal had been passed on and "we await her response".

"Ms Skripal's own wishes need to be taken into account," Ms Pierce added.

Meanwhile, US representative Kelley Currie said Russia was attempting to use the Security Council "for political gains", adding: "This is not a tactic that is appropriate for this body."

It comes amid an escalating diplomatic crisis between Moscow and the West as 60 expelled US envoys left Russia on Thursday.

More than 20 countries have expelled Russian envoys in solidarity with the UK, following Britain's initial expulsion of 23 Russian diplomats.

The UK government has constantly maintained Russia was behind the attack, claiming there is "no other plausible explanation".

On Wednesday, Russia proposed a joint investigation into the poisoning but the idea was voted down by the Organisation for the Prohibition of Chemical Weapons.

In a press conference, Russian ambassador to the UK, Alexander Yakovenko, said it marked a vote against "transparency".