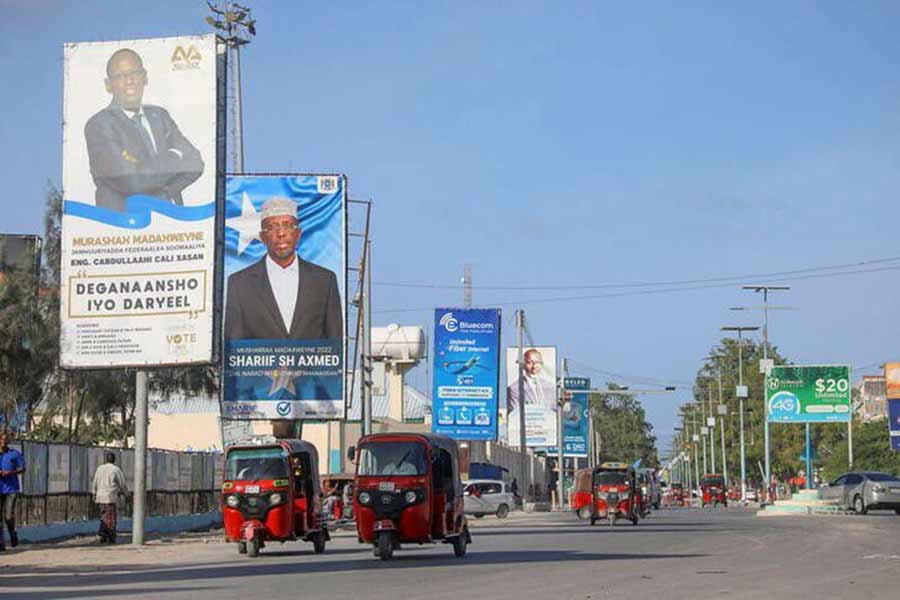 Somali parliamentarians met on Sunday in a heavily-fortified airport hangar to choose a new president in a vote required to keep foreign aid coming to the impoverished nation tortured by three decades of civil war.

In a crowded field of 35 aspirants, former presidents Sharif Sheikh Ahmed and Hassan Sheikh Mohamud were the frontrunners, according to analysts, even though their rules had failed to stem corruption or a war by militants, reports Reuters.

The United Nations-backed vote was delayed by over a year due to squabbling in government but must be held this month to ensure a $400 million International Monetary Fund programme.

It takes place during the Horn of Africa nation's worst drought in four decades, and against a depressingly familiar background of violence due to attacks by al Shabaab rebels, in-fighting among security forces and clan rivalries.

On Wednesday, a suicide bomb claimed by al Shabaab injured seven people during political rallies near the hangar in the coastal capital Mogadishu.

On Friday, fighters from a Sufi Muslim group battled government forces in Galmudug state. There was a curfew across Mogadishu on Sunday, with streets quiet and shops closed.

Though just holding the process was a success of sorts, many in the country of 15 million people were sceptical of real progress. Leading candidates were old faces recycled from the past who had done little to help them, and such votes were traditionally dominated by bribery, they complained.

'NO LIFE IN SOMALIA'

Somalia is still unable to hold a direct popular vote due to insecurity, with the government having little control beyond the capital. African Union peacekeepers guarded the site within an Iraq-style "Green Zone" as politicians arrived, chatted and listened to traditional music.

Two or three rounds of voting were expected, with a result likely by late evening.

"The only hope we have is this election," said medical student Nur Ibrahim.

"There is no life in Somalia. We study and then get bombed by terrorists. If there is no peace, education has no use."

Only one woman was standing, former foreign minister Fawzia Yusuf Adam, but was not expected to garner significant support in the strictly patriarchal society. read more

Ahmed, a former Islamist, took over a Western-backed transitional government in 2009, establishing the national army and helping push al Shabaab out of Mogadishu though it came back strongly in the regions. The other former president, Mohamud, was a peace activist and academic.

"Today all are indoors watching the hottest ever presidential election," said an elder in Mogadishu, Farah Ahmed, adding that if the unpopular incumbent was re-elected, many more Somalis would leave their homeland in despair.