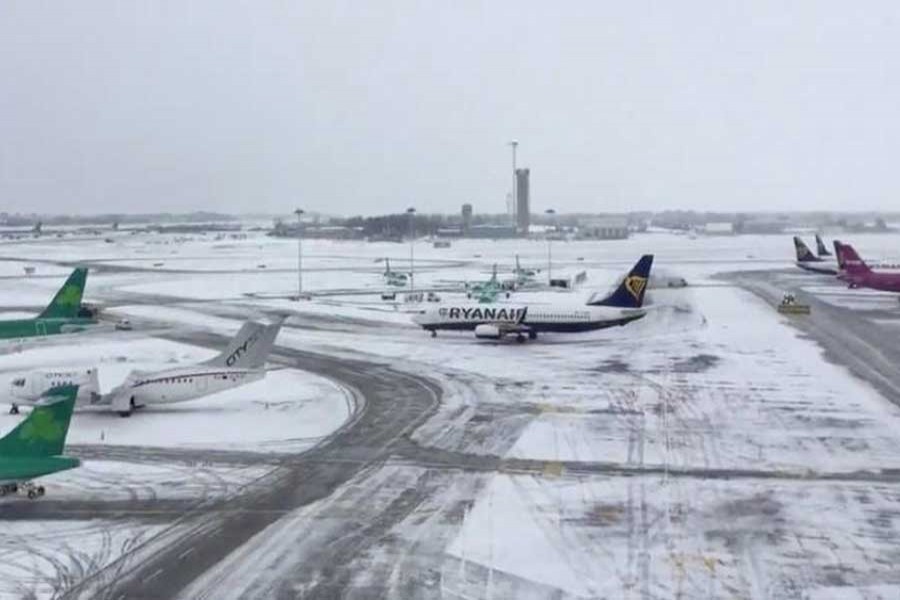 The Dublin Airport is seen covered with snow, in Dublin, Ireland, March 1, 2018 in this picture obtained from social media. Reuters

Snow storms shut most of Ireland on Friday and forced Britain to call in the army to battle some of the worst weather seen in nearly 30 years.

After a blast of Siberian weather dubbed “the beast from the east”, southern Britain and Ireland were battered by Storm Emma which blocked roads, grounded planes and stopped trains.

At least 24,000 homes and businesses in Ireland were left without power, the stock exchange was shut, all schools were closed and transport ground to a halt with all flights cancelled from Dublin airport.

In Britain, a seven-year-old girl was killed in Cornwall after a car crashed into a house in icy conditions, the BBC reported. Dozens of passengers were stranded on trains overnight in southern England.

According to bdnews24, the army was called in to help rescue hundreds of drivers stuck in the snow and to transport National Health Service workers. Roads were closed, schools shut and flights cancelled across Britain.

“The Armed Forces are assisting emergency services in ensuring essential NHS staff are able to get to work and carry out their work in local communities,” a spokesman for the Ministry of Defence said.

The army is “standing by to help the Police and civil authorities across the UK following heavy snowfall. We are also aware of Armed Forces personnel volunteering in their own time with their own vehicles to help those in need.”