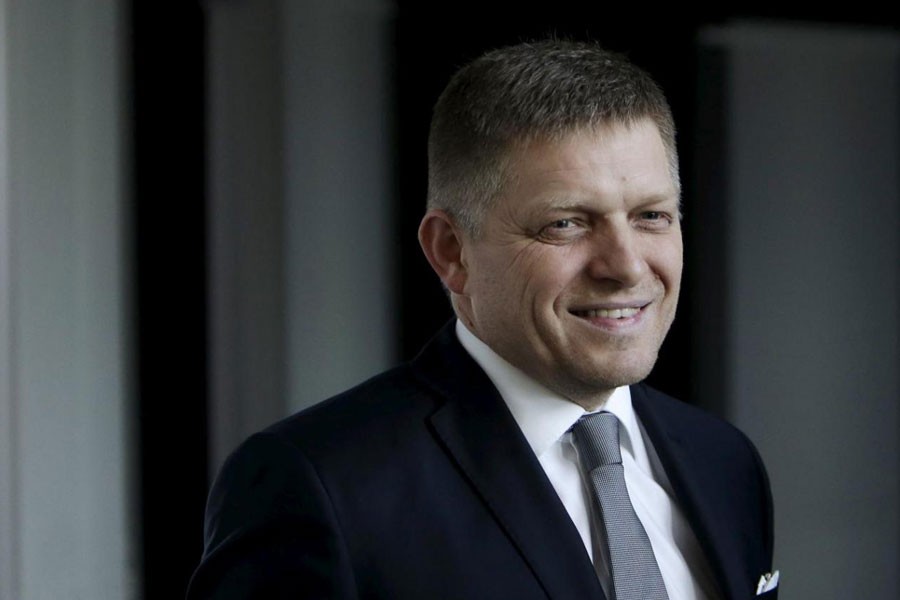 Slovakia's Prime Minister and leader of Smer party Robert Fico leaves after a live broadcast of a debate after the country's parliamentary election, in Bratislava, Slovakia, March 6, 2016. (REUTERS)

The Prime Minister of Slovakia, Robert Fico has offered one million euro reward for anyone who comes forward with information about the murder of an investigative journalist.

Jan Kuciak, 27, and his partner Martina Kusnirova were shot dead in their home on Sunday, 65km (40 miles) east of the capital.

Reports say he was about to publish an investigation linking the Italian mafia to high-level political corruption.

Fico held a press conference on Tuesday, where he stood by piles of banknotes that the government is promising in exchange for information about the killings, says a BBC report.

Press speculation about the motive for the mysterious murder has been rife in Slovakia.

A British-born journalist who worked with Kuciak has suggested he was looking into allegations about fraudulent payments of EU funds in a tax scheme, between Slovakia and Italian nationals with alleged ties to the ‘Ndrangheta’ organised crime group.

Maria Toroskova, a senior advisor to Prime Minister Robert Fico, was among those being investigated, Slovak media reports.

“Do not link innocent people without any evidence to a double homicide,” Fico told journalists on Tuesday.

“It's crossing the line. It's no longer funny.”

During the Tuesday press conference Fico complained about ‘political abuse of a tragedy’ after opposition politicians held a news conference making accusations linking the ruling Smer party to the killings.

Opposition groups have called for fresh anti-corruption protests in the capital Bratislava on Wednesday.

Police President Tibor Gaspar said authorities had questioned 20 people since Monday, and had contacted the Czech Republic and Italy about the investigation.

Gaspar also confirmed the EU's police agency Europol had offered their specialist assistance with the investigation.

The chief has said the motive was ‘most likely’ related to Kuciak's investigative journalism, and has warned reporters about publishing details of the case.

Like other ex-communist countries, Slovakia enacted far-reaching law and justice reforms in order to qualify for EU membership.

Kuciak had been working for Aktuality.sk, an online unit of Swiss and German-owned publisher Ringier Axel Springer, for three years.

The Slovak Prime Minister has said he would meet media outlets to assure them “that the protection of freedom of speech and the safety of journalists is our common priority and that it is extremely important to my government”.