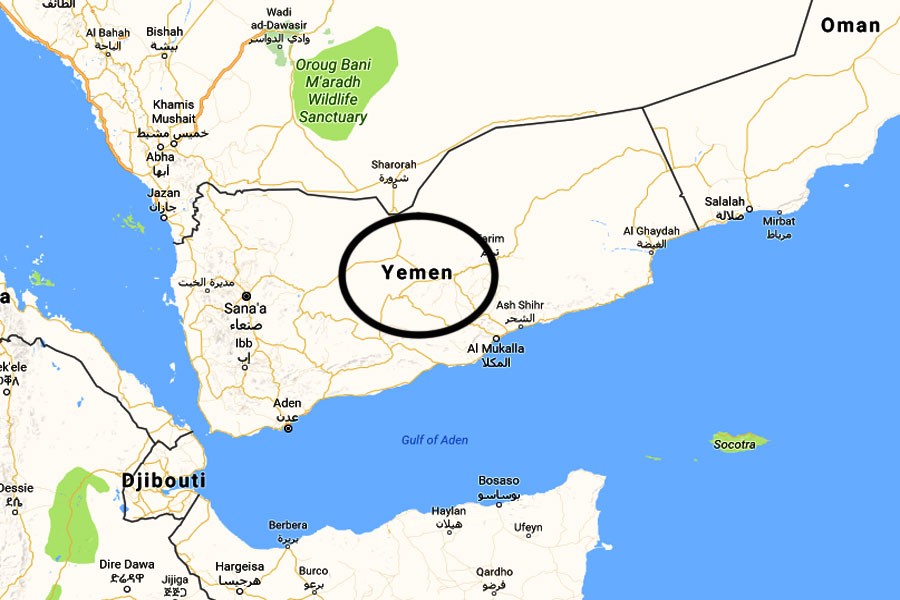 Google map showing the Republic of Yemen, an Arab country in Western Asia at the southern end of the Arabian Peninsula.

Six members from a family, mostly children, were killed Tuesday night in an airstrike carried out by Saudi-led coalition in Yemen’s northeastern province of Jawf, a local security official told Xinhua.

The airstrike hit the civilian house in Rohoob area of Barat Alanan district, killing the husband, wife and their four little girls, and destroying their house, the official said by phone on condition of anonymity.

A boy, the only survivor from the family, was critically wounded from the airstrike, said the official.

Rohoob area is a populated agricultural area and is about 20 km south of the battlefront, where fighting has been raging on between Shiite Houthi rebels and the government forces backed by the coalition warplanes.

The strike is the latest among a series of airstrikes in the war-torn Arab country since the coalition launched a large-scale air campaign against the rebels in Yemen more than two and a half years ago.

Residents said the family's house was targeted again a few minutes later when rescuers were trying to approach the house to help rescue possible survivors.

They said no rescuers were hurt as they were still a few meters away from the house.

Six days ago, a coalition airstrike targeted a family's house in Nehm district on the northeastern outskirts of the capital Sanaa, killing five civilians, mostly children and injuring three others from the same family, according to a local security official and residents.

In March 2015, the Saudi-led coalition intervened in the Yemeni conflict to back the internationally recognized government of President Abd-Rabbu Mansour Hadi against the Houthi rebels, who seized most of the country's northern provinces, including the capital Sanaa.

More than 10,000 people, mostly civilians, have been killed in the war with over 3 million others displaced, according to UN agencies.

The country has also been hit by a deadly cholera epidemic and is on the brink of mass famine.