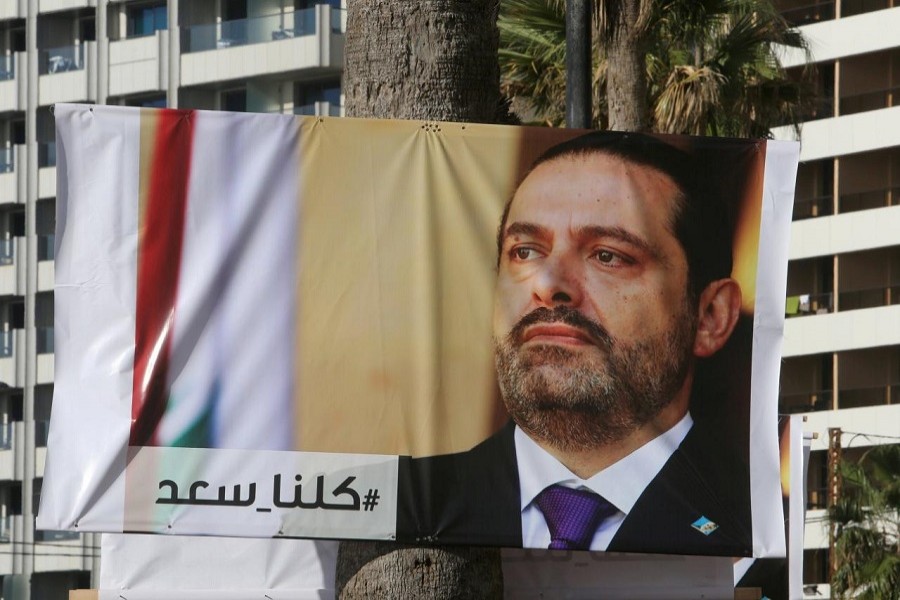 A poster depicting Lebanon's Prime Minister Saad al-Hariri, who has resigned from his post, is seen in Beirut, Lebanon, November 10, 2017. Reuters

Mr Hariri earlier denied claims he was being held hostage in the Gulf kingdom, tweeting that it "is a lie".

Mr Hariri resigned unexpectedly during a visit to Riyadh on 4 November - but his resignation has not been accepted.

Meanwhile, Saudi Arabia has recalled its envoy to Berlin over comments by Germany's foreign minister suggesting Mr Hariri was held against his will.

Sigmar Gabriel made the remarks during a press conference with his Lebanese counterpart.

"Saudi Arabia has decided to recall its ambassador to Germany for consultations and will give the German ambassador in the kingdom a letter protesting these unfortunate and unjustified statements," the Saudi state news agency SPA said.

"Mr Hariri left Riyadh airport on his private jet with his wife and is headed for Le Bourget airport (near Paris)," Future TV announced early on Saturday.

Mr Hariri is expected to meet Mr Macron and then visit other Arab capitals before a possible return to the Lebanese capital Beirut.

On Wednesday, President Emmanuel Macron said he had invited Mr Hariri and his family to Paris after the French leader spoke by telephone to Saudi Crown Prince Mohammed bin Salman.

The French president was later forced to clarify that he was not offering political exile, and that he expected Mr Hariri to stay only "for a few days".

France, Lebanon's former colonial ruler, has been trying to mediate in the crisis.

Mr Hariri's departure for France marks a new chapter in an extraordinary political crisis which continues to be a source of intense speculation as well as condemnation, the BBC's Lyse Doucet says.

Lebanese officials had earlier said Mr Hariri was being detained in Saudi Arabia - a claim denied as "false" by Riyadh.

Saudi Arabia has also denied forcing Mr Hariri to resign in an attempt to curb the influence of its regional rival Iran and its Lebanese proxy Hezbollah, which is part of a national unity government that Mr Hariri formed last year.

Mr Hariri announced his resignation in a televised address from Riyadh, in which he accused Iran of sowing "discord, devastation and destruction" in the region and said he sensed there was an assassination plot against him.

His father Rafik - himself a former Lebanese prime minister - was killed in a suicide bombing in Beirut in 2005.

Several members of Hezbollah are being tried in absentia at an UN-backed tribunal at The Hague in connection with the attack, though the group has denied any involvement.

Mr Hariri has close ties with Saudi Arabia. He holds both Lebanese and Saudi citizenship, owns properties in the kingdom, and Riyadh is a key backer of his political party, the Future Movement.