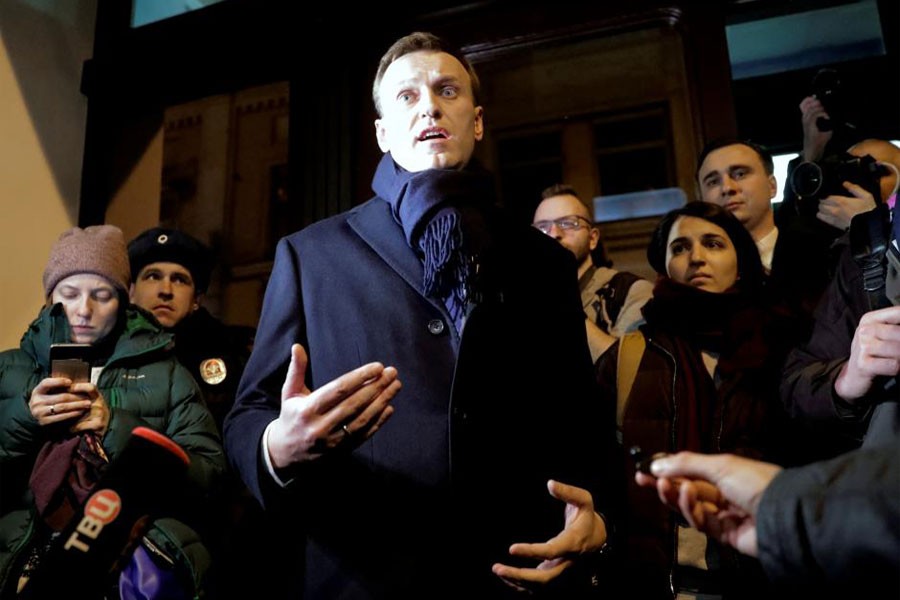 Russian opposition leader Alexei Navalny speaks to the media after submitting his documents to be registered as a presidential candidate at the Central Election Commission in Moscow, Russia December 24, 2017. (REUTERS)

Russian opposition leader Alexei Navalny has been formally barred from competing in next year's presidential election.

The Central Electoral Commission has said Navalny was ineligible because of a corruption conviction which he says is politically motivated.

He has urged his supporters to boycott the March vote.

Navalny, 41, was widely regarded as the only candidate with a chance of challenging President Vladimir Putin, reports BBC.

"We're declaring a strike by voters. The procedure that we're invited to take part is not an election," Navalny said after the decision, adding that he would lead protests across the country.

Known for his anti-corruption campaign and protests against Putin, Navalny was given a five-year suspended sentence in a retrial earlier this year on embezzlement charges.

The commission's head, Ella Pamfilova, said her institution was simply applying the law which disqualifies Navalny. Twelve of the 13 members rejected his application as candidate, with one member abstaining citing a conflict of interest.

Reacting to the widely expected decision, Navalny said the case was intended to block him from "speaking the truth" about the situation in Russia, and that barring him from running would deny millions of Russians their vote.

"Only Putin and the candidates that he personally chose, ones who don't pose the slightest threat to him, are taking part [in the vote]," he added.

He said he would launch an appeal in Russia's Constitutional Court.

On Sunday, he said he had gathered the 500 signatures needed to secure his candidacy, hoping that this would pressure the election commission into allowing him to run.

Navalny was first sentenced in 2013 accused of embezzling timber worth 16m roubles ($500,000; £330,000) from the Kirovles state timber company while working as an adviser to Kirov's governor.

The verdict was quashed by the European Court of Human Rights (ECHR), which said he was not given a fair hearing. A retrial earlier this year gave him the exact same sentence.

Putin is seeking a fourth term that would see him become the longest-serving Russian leader since Joseph Stalin. He still retains a massive approval rating and is almost certain to ease to victory in the election.