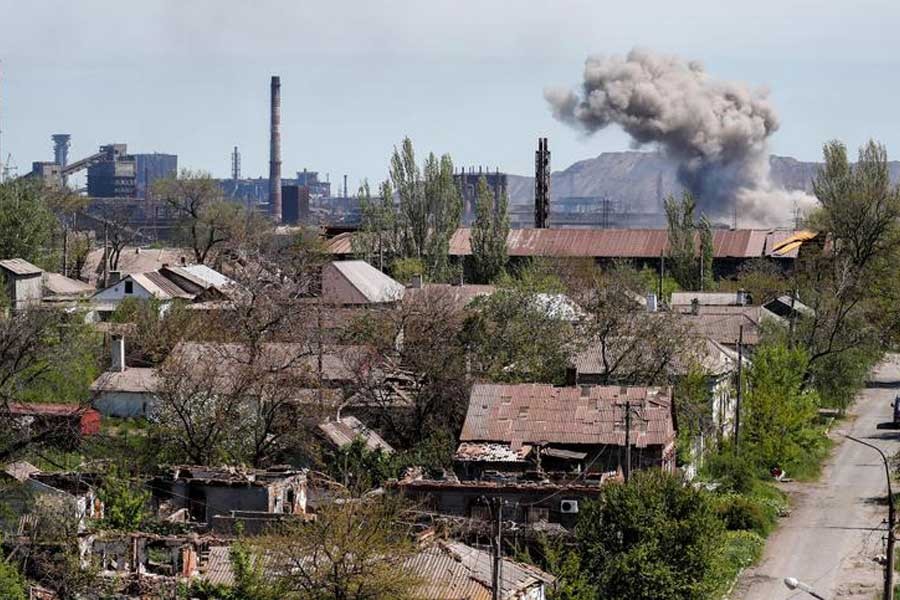 Putin marked the anniversary of the Soviet Union's victory over Nazi Germany in World War Two by telling his armed forces they were fighting for their country. But he did not say how much longer their assault on Ukraine, now in its 11th week, would last or how it would end.

Ukraine's President Volodymyr Zelensky, in his own Victory Day address, said his country would triumph over Russian forces.

"On the Day of Victory over Nazism, we are fighting for a new victory. The road to it is difficult, but we have no doubt that we will win," he said in a video address to mark the deaths of more than eight million Ukrainians in World War Two.

Ukrainian officials said heavy fighting was underway in the country's east, while four high-precision Onyx missiles fired from the Russian-controlled Crimea peninsula had struck the Odesa area in southwestern Ukraine. The governor of Mykolaiv, also in the southwest, said overnight strikes were very heavy.

Azovstal, a vast complex of buildings and underground tunnels, is the last holdout for Ukrainian troops in Mariupol, whose capture would help link Russian-seized areas in southern and eastern Ukraine and cut Ukraine off from the Azov Sea.

Putin has already declared victory in Mariupol but control of the steel plant would be a symbolic achievement on the 75th day of a war that has cost many Russian lives and isolated its economy, but failed to capture any major city.

Putin had told his defence minister not to storm Azovstal to avoid loss of Russian lives but Ukraine's defence ministry said on Monday Russian forces backed by tanks and artillery were conducting "storming operations".

Moscow has denied previous Ukrainian allegations of storming the complex, where civilians have also been sheltering. On Saturday Kyiv and Moscow said all the civilians had now been evacuated from the facility, but there are still people hoping to flee the wider city of Mariupol.

"There's lots of people still in Mariupol who want to leave but can't," evacuee Viktoria Andreyeva, a 46-year-old history teacher, said in the Ukrainian-controlled city of Zaporizhzhia, about 230 km (140 miles) northwest of Mariupol.

Just before the troops and tanks paraded in Moscow's Red Square, Russian satellite television menus were altered to show viewers in the Russian capital messages condemning the war in Ukraine.

"The TV and the authorities are lying. No to war," screenshots obtained by Reuters showed before they disappeared.

Russian forces have devastated villages, towns and cities and driven nearly six million Ukrainians to flee since they started ‘military drive’ in Ukraine on Feb 24.

Ukraine's Deputy Defence Minister Hanna Malyar said Russian forces were now trying to advance in eastern Ukraine, where the situation was "difficult", but had moved back from the city of Kharkiv, where a local official reported heavy Russian shelling.

Kyiv has called for the UN Human Rights Council to hold a special session to review the "continuously deteriorating" situation across Ukraine, including reports of mass casualties in Mariupol, a letter showed on Monday.

Three more civilians were killed in Kharkiv and three in the Luhansk region, its governor Serhiy Gaidai said. It was not immediately possible to verify the reports.

"Today we do not know what to expect from the enemy, what terrible thing they might do, so please go out onto the street as little as possible, stay in the shelters," he said on Monday.

Putin said Russia's "special military operation" in Ukraine was a purely defencive and unavoidable measure against plans for a NATO-backed invasion of lands he said were historically Russia's, including Crimea.

"Russia preventively rebuffed the aggressor," he said, offering no evidence for what he called open preparations to attack Crimea and Ukraine's Donbas region.

In 2014, Russian-backed separatists seized parts of Donbas in eastern Ukraine and Russia annexed Crimea from Ukraine the same year. Moscow then massed troops around Ukraine last year ahead of an all-out invasion that Kyiv and its Western allies say was entirely unprovoked.

Putin casts the war as a battle against dangerous "Nazi"-inspired nationalists in Ukraine - an allegation Kyiv and its allies say is nonsense - and links it to the challenge the Soviet Union faced when Adolf Hitler invaded in 1941.

"All plans are being fulfilled. A result will be achieved - on that account there is no doubt," Putin was quoted as saying after Monday's parade.

Britain's Defence Minister Ben Wallace said Putin and his inner circle of generals were mirroring the fascism and tyranny of Nazi Germany and were hijacking the proud history of their forebears.

Moscow has come under increasingly punishing sanctions since its invasion on Feb 24, with trade heavily impacted and assets seized. A German official said agreement by European Union member states on new measures - expected to include an embargo on Russian oil - was close.

The EU's foreign policy chief told the Financial Times the bloc should also consider using frozen Russian foreign exchange reserves to help pay for the cost of rebuilding Ukraine after the war.

Charles Michel, president of the European Council visited Odesa in the latest show of Western support, while Council of Europe Secretary General Marija Pejcinovic was in Kyiv to discuss what Ukraine said was how to hold Russia accountable for its crimes.